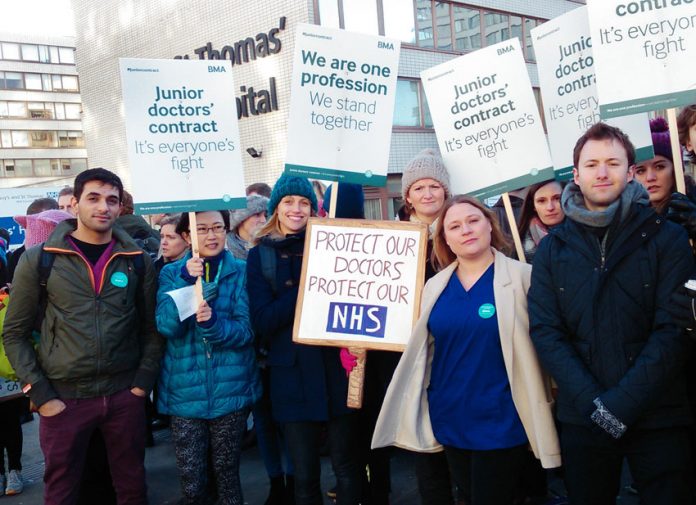 JUNIOR doctors will strike again next week after ministers ramming through cuts to out-of-hours payments refused to put reason before ideology in negotiations, the British Medical Association (BMA) said yesterday.

Thousands of registrars will provide emergency care only for 24 hours from 8am on Wednesday February 10.

The union suspended a 48-hour stoppage on January 26 after initial progress in talks. And they have scrapped plans for a full walkout, where even emergency care would not be provided, next week.

But BMA junior doctors chair Johann Malawana said: “The government’s position — based on ideology rather than reason — risks souring relations with an entire generation of junior doctors, the very doctors who the Secretary of State has acknowledged as the backbone of the NHS.”

Currently doctors below consultant rank are paid extra from 7pm to 7am Monday to Friday and at weekends.

But Health Secretary Jeremy Hunt is trying to cut back on such expenses in his feted plans for a “seven-day NHS” — a slogan which has been ridiculed by doctors who argue they already work throughout the week.

Last month ministers said the higher rate would kick in from 5pm on instead of 7pm on Saturdays.

Mr Malawana said: “The government’s entrenched position in refusing to recognise Saturday working as unsocial hours, together with its continued threat to impose a contract so fiercely resisted by junior doctors across England, leaves us with no alternative but to continue with industrial action.

“The government misrepresents junior doctors as a block to a seven-day NHS, but they already work every day of the week. What we are asking is that this is reflected in fair and affordable recognition of unsocial hours.”

Labour shadow health secretary Heidi Alexander said Mr Hunt’s anti-union rhetoric had “left doctors feeling angry and demoralised.” And she called on the health secretary to apologise to patients for the disruption.

“His actions have led to this dispute and it’s about time he took some responsibility and brought an end to the deadlock,” she said.

London: ‘EALING Hospital is the beating heart of the whole community, leave our hospital alone!’ local resident Prempal Dhaliwal said on the mass picket of the hospital last Friday: here.

9 thoughts on “British junior doctors don’t give up”