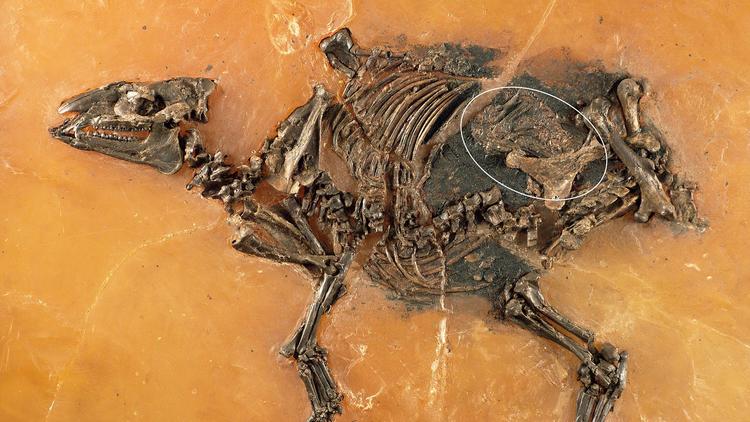 Talk about a mother of a discovery: Researchers in Germany have found the fossil of a 48-million-year-old pregnant horse relative, her fetus and bits of her preserved uterus as well.

It is the oldest and only the second fossil uterus ever described, according to Jens Franzen of the Senckenberg Research Institute in Frankfurt, Germany.

Franzen and his colleagues described the find in a paper published Wednesday in PLOS One.

Less than 2% of fossil mammal finds have yielded anything more than fragments of jaw material and other bones, which makes this discovery particularly unexpected.

The primitive horse relative is known as Eurohippus messelensis. It was much smaller than modern-day horses. Even fully grown, the ancient equine was about the size of a fox terrier — about 12 inches high at the shoulders. It was discovered in Grube Messel, near Darmstadt, Germany.

In the picture above, you are looking mostly at the fossilized remains of the mare. The fetus is located in the white oval.

Franzen and his colleagues report that the 48-million-year-old uterus looks nearly identical to those found in modern horses. This suggests that the uteral system was already well developed by the Eocene period (56 to 34 million years ago), and may date back to the Paleocene era (66 million to 56 million years ago) or even earlier.

Grube Messel is a former shale quarry that is famous for its complete vertebrate skeletons. Back in the time when Eurohippus messelensis roamed, it was a freshwater lake, surrounded by a tropical rainforest.

Animals that fell in the lake were preserved thanks to an interaction between bacteria in the lake and iron in the water.

After a dead animal was submerged in the lake, bacteria gathered on its soft tissue and started producing CO2. The CO2 reacted with the iron in the lake to form iron carbonate minerals. This material hardened on the bacteria, creating a fixed bacterial mat that exactly followed the lines of the decomposing soft tissue.

“The bacteria petrified themselves,” Franzen said.

The preserved bit of uterus was not immediately obvious, however. The researchers said they first noticed a “conspicuous gray shadow” between the fetus and the lumbar vertebrae of the mother, after taking a micro X-ray of the fossil.

They eliminated the possibility that the shadow was an artifact of preparation or an abdominal muscle. Eventually, they concluded that they were looking at the oldest bit of fossilized uterus ever seen.

The authors are still not sure what killed the mother Eurohippus messelensis, but it is unlikely that childbirth was to blame. Although the fetus was near term when its mother died, it was not yet positioned to enter the birth canal.