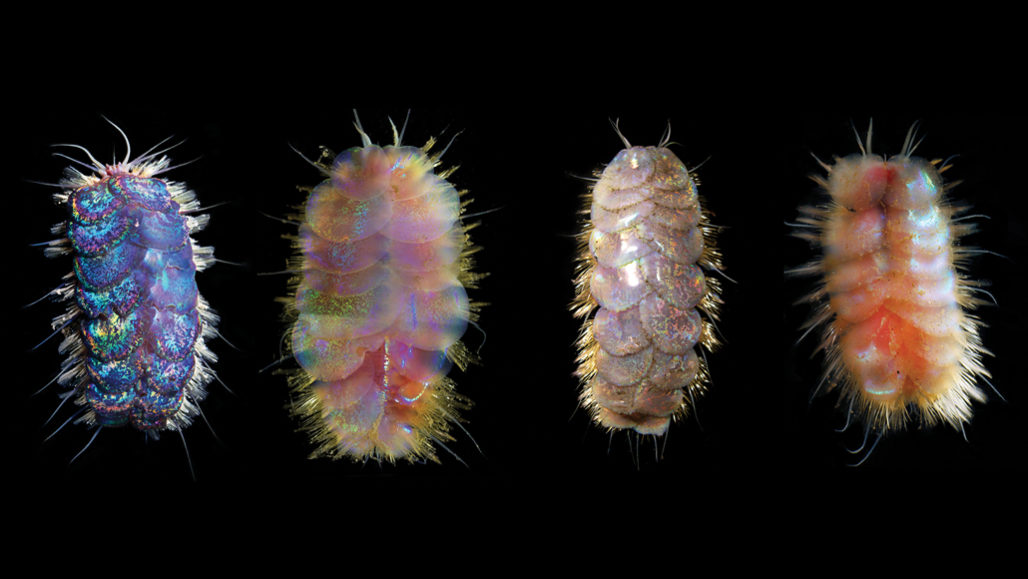 A new look at the critters known as “Elvis worms” has the scale worm family all shook up.

These deep-sea dwellers flaunt glittery, iridescent scales reminiscent of the sequins on Elvis’ iconic jumpsuits (SN: 1/23/20). “For a while, we thought there was just one kind of Elvis worm,” says Greg Rouse, a marine biologist at the Scripps Institution of Oceanography in La Jolla, Calif. But analysis of the creatures’ genetic makeup shows that Elvis worms comprise four species of scale worm, Rouse and colleagues report May 12 in ZooKeys.

Rouse’s team compared the genetic material of different Elvis worms with each other, and with DNA from other scale worm species. This analysis places Elvis worms in the Peinaleopolynoe genus of scale worms, which includes two other known species — one found off the coast of Spain, the other off California.

A new genetic analysis of the deep-sea creatures nicknamed “Elvis worms” reveals that these iridescent creatures include four separate species. The Elvis worms seen in this video belong to the species Peinaleopolynoe orphanae, which mostly sport glittery blue scales, but also come in other colors, like black and red. These worms may look dainty, but they fight dirty, chomping at each other’s scales when they get into skirmishes.

The four newly identified Elvis worm species are scattered across the Pacific, from P. elvisi and P. goffrediae in Monterey Canyon off California to P. orphanae in the Gulf of California by Mexico and P. mineoi near Costa Rica.

These deep-sea Elvis impersonators share some common traits, such as nine pairs of scales. But each species has its own distinct flare. P. elvisi’s gold and pink iridescent color scheme earned it the honor of keeping the worms’ namesake in its official title. P. orphanae, on the other hand, mostly sports rainbow-sparkled scales of a bluish hue.

The researchers don’t know why Elvis worms have evolved such eye-catching scales, since the animals live in the dark, deep sea. It could just be a side effect of developing thicker scales over time, which happen to refract more light, Rouse says. Thicker scales could come in handy in a fight, since Elvis worms are apparently biters, a behavior discovered while watching a worm skirmish. “Suddenly, they started doing this amazing jitterbugging — wiggling, and then fighting and biting each other” on their scales, Rouse says. “No one’s ever seen any behavior like this in scale worms.”