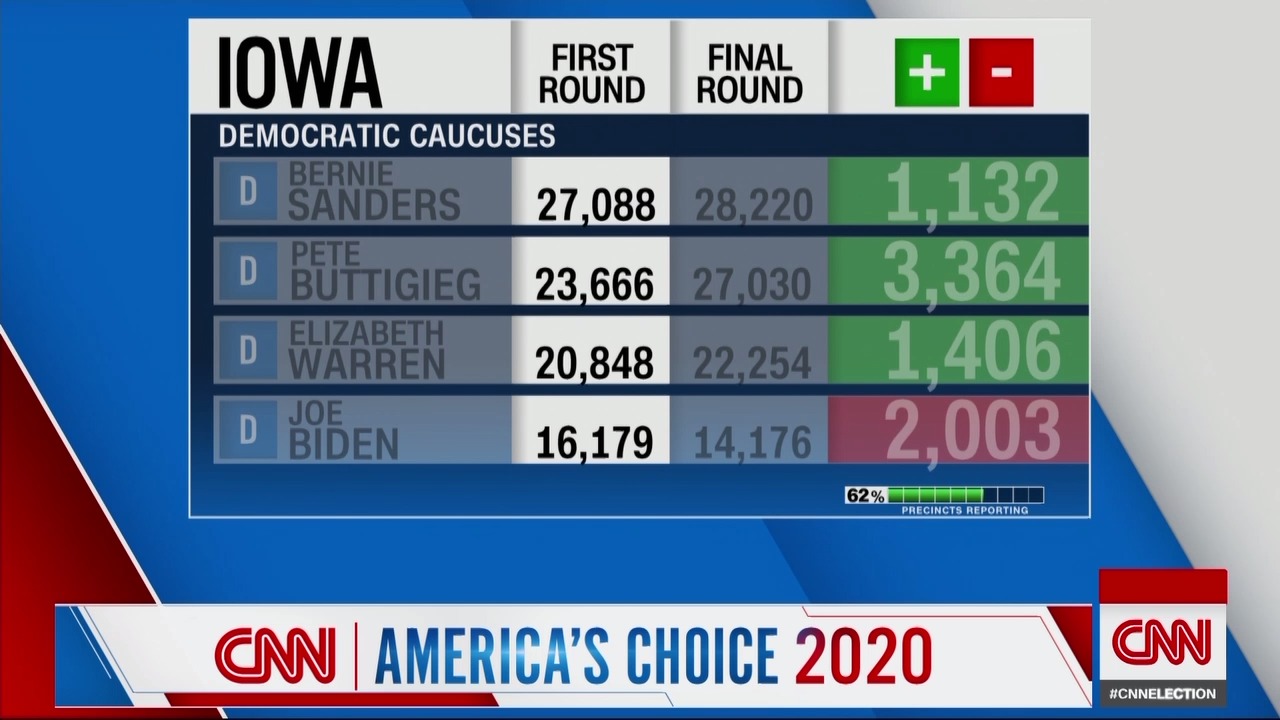 Now, in Iowa, USA, at last, the Democratic party presidential election caucus results, of 62% of precincts from all 99 counties, are in.

So, not 100% yet, so everything is still provisional.

If things stay this way, then Bernie Sanders is the victor.

And another candidate, Pete Buttigieg, who proclaimed himself to be the victor when not 62%, but 0% of the results were known, is not the victor.

This 4 February 2020 video from Canada is called Pete Buttigieg tried to steal narrative of Iowa Caucus victory from Bernie Sanders.

BUTTIGIEG’S ADVISER SENDS SKETCHY TWEET A Pete Buttigieg adviser tweeted the importance of publicizing the candidate’s military record to the people of Nevada, and the message looked an awful lot like he was trying to get around federal anti-coordination rules that prevent campaigns from sharing strategy and messaging with outside groups. [HuffPost]

And former Vice President Joe Biden, the ‘frontrunner’ according to corporate media, is not the real frontrunner, but #4.

Whatever the specific intentions of the Iowa state party leaders, every action they have taken in the caucus crisis has been to the detriment of Vermont Senator Bernie Sanders and to the benefit of former South Bend mayor Pete Buttigieg. The former naval intelligence officer has been declared the winner of the caucuses by the media because, in the results tabulated for 62 percent of precincts, he placed first in the obscure category of “state delegate equivalents”, the metric highlighted by the state party.

In the same tabulation, Sanders won the most votes, both in the initial count and in the second round after “unviable” candidates—those with less than 15 percent support—had been eliminated. Moreover, much of the unreported vote is from college and factory towns where the Vermont senator posted his best results. It is quite possible that Sanders will also lead in delegate equivalents once a final count is reported.

Faulty app at the centre of the Democrat’s Iowa controversy owned by billionaire backer of Buttigieg: here.