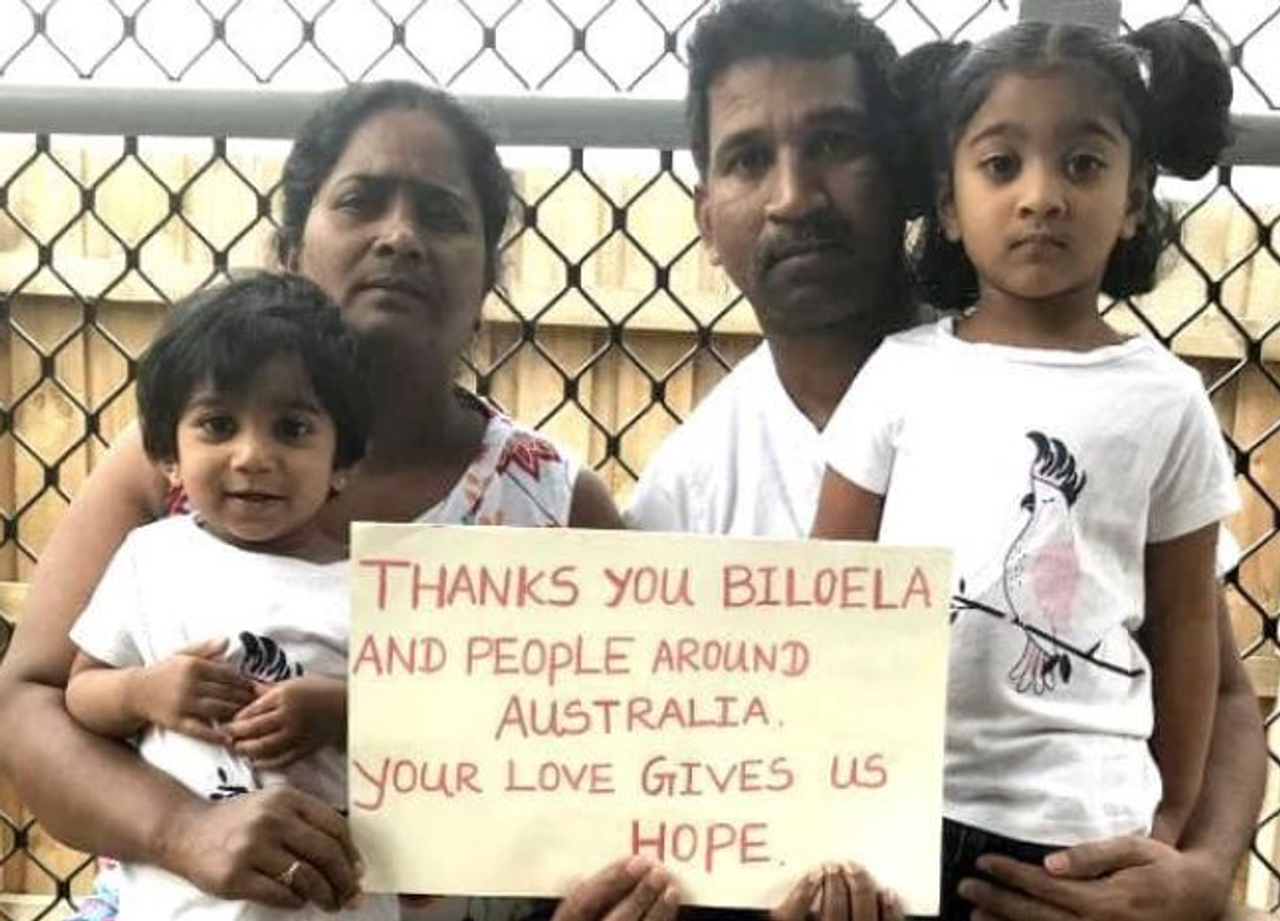 By Oscar Grenfell in Australia:

In a major attack on democratic rights, Border Force agents, acting under instruction from the federal Coalition government, bundled a family of Tamil refugees onto a plane late last night to dispatch them to Sri Lanka.

The police-state style operation was only halted in the early hours of the morning after lawyers for the family secured a last-minute federal court injunction, temporarily blocking their deportation. A hearing of the Federal Circuit Court in Melbourne today granted a further injunction until 4.00 p.m. next Wednesday. The order, however, reportedly only covers the youngest of the two children, meaning that the threat of the family’s imminent return to Sri Lanka, where they face state persecution, remains.

Lawyers for the family, and their supporters, outlined the brutal actions of immigration authorities in comments to the media.

On Thursday, the husband and wife, Nadesalingam and Priya, were reportedly given two “Notices of Intention to Remove from Australia” for themselves and their daughters, Kopika, who is just four-years-old, and Tharunicaa, who is only two.

In the evening, Border Force agents at the Melbourne detention centre where the family has been held since March 2018 forced them into a van that took them to Tullamarine Airport. The family was then bundled onto a non-commercial flight bound for Sri Lanka.

Priya’s arm was injured when she was forced onto the plane. She was then separated on the flight from her two infant children. They were only taken off the plane when it landed in Darwin to refuel after the injunction was secured last night.

The government’s attack on the family has provoked broad opposition. The attempted deportation was doubtless timed late at night, to prevent protests and other actions.

Despite this, some 50 supporters of the family gathered at the airport within hours of the news that they had been taken from the Melbourne detention centre. Australian Federal Police arrested two women, after they allegedly breached an airport perimeter fence in a desperate bid to block the flight.

This morning, four of the top five Australian hashtags on Twitter were in defence of the family. They included demands that they be allowed to remain in Australia and condemnations of the government.

The hashtag #hometobilo, calling for the family to be returned to the Queensland country town of Biloela, where they were snatched by immigration authorities last year, was the most popular in Australia throughout the morning.

Angela Fredericks, a Biloela resident and campaigner for the family’s freedom, told the Australian Broadcasting Corporation’s Radio National this morning: “People in Biloela are in absolute disbelief at the cruelty that occurred last night. The messages I’m getting is people’s disgust at what Australia as a country is doing.”

The government has responded to the outrage by doubling-down on its plans to force the family to Sri Lanka. Speaking on Channel Nine’s “Today” program this morning, Home Affairs Minister Peter Dutton callously declared: “I would like the family to accept that they are not refugees, they’re not owed protection by our country.”

The government line is a continuation of its 18-month persecution of the family. On March 5, 2018, at around 5.00 a.m., Border Force officers, police and private Serco guards raided the family’s Biloela home. They dragged the infant children out of bed and gave their parents just 10 minutes to pack before they were taken to an airport and flown to a detention centre in Melbourne, over 1,600 kilometres away.

Residents of the town immediately began a campaign in defence of the family, launching petitions, holding demonstrations and winning mass public support. They noted that Nadesalingam and Priya were highly-respected members of the community, where they had lived and worked for years. The petition they initiated has been signed by more than 200,000 people.

The response was a damning refutation of the claims, incessantly peddled by the political establishment and sections of media, that the bipartisan assault on refugees is supported by workers in rural Australia. The sentiments in Biloela are mirrored in numerous country towns and regional centres, where Australian citizens and immigrants work side by side and confront escalating assaults on their jobs and social conditions.

Despite the widespread support for the family, they have been denied the most basic rights to health care. Last month, four of Tharunicaa’s teeth were surgically removed, and another four were treated, because they had become rotten.

Her mother Priya had complained for months that the two-year-old child was in pain and had been unable to eat solid foods due to her untreated dental conditions. Because of the neglect by the authorities, the baby will spend the next five years without any front teeth, until her adult set begins to grow.

At the same time, a succession of courts refused to uphold the family’s refugee status, claiming that it would be safe for them to return to Sri Lanka.

These assertions are transparently false. Nadesalingam and Priya fled Sri Lanka and came separately to Australia by boat in 2012 and 2013. They sought refuge in the wake of the Sri Lankan government’s almost three-decade communal war against the separatist Liberation Tigers of Tamil Eelam (LTTE). The war concluded in 2009 with the mass murder of Tamil civilians and the imposition of military-rule in the country’s north. Tamil workers and youth continue to be threatened and imprisoned by the police and the security services.

Other Tamil asylum-seekers who have been returned by Australia to Sri Lanka have faced detention and state persecution, forcing many into hiding. Given the prominence of their case, moreover, Nadesalingam and Priya will inevitably be targeted if they are returned to Sri Lanka. There is every likelihood that the government will make an example of them to intimidate others who are considering applying for asylum. …

What is required is the development of a movement of the entire working class against the reactionary framework of “border protection”, which is used to divide workers along national lines and divert attention from the cause of the deepening social crisis: the capitalist system.

In a deliberately punitive move, immigration authorities transported the family from Darwin, where the flight bound for Sri Lanka had landed, to the offshore Christmas Island detention centre in the Indian Ocean, north of the Australian mainland. The facility was re-opened by the Coalition government earlier this year although there are no other refugees detained there: here.

Australia: Stop the deportation of the Biloela refugee family! Here.