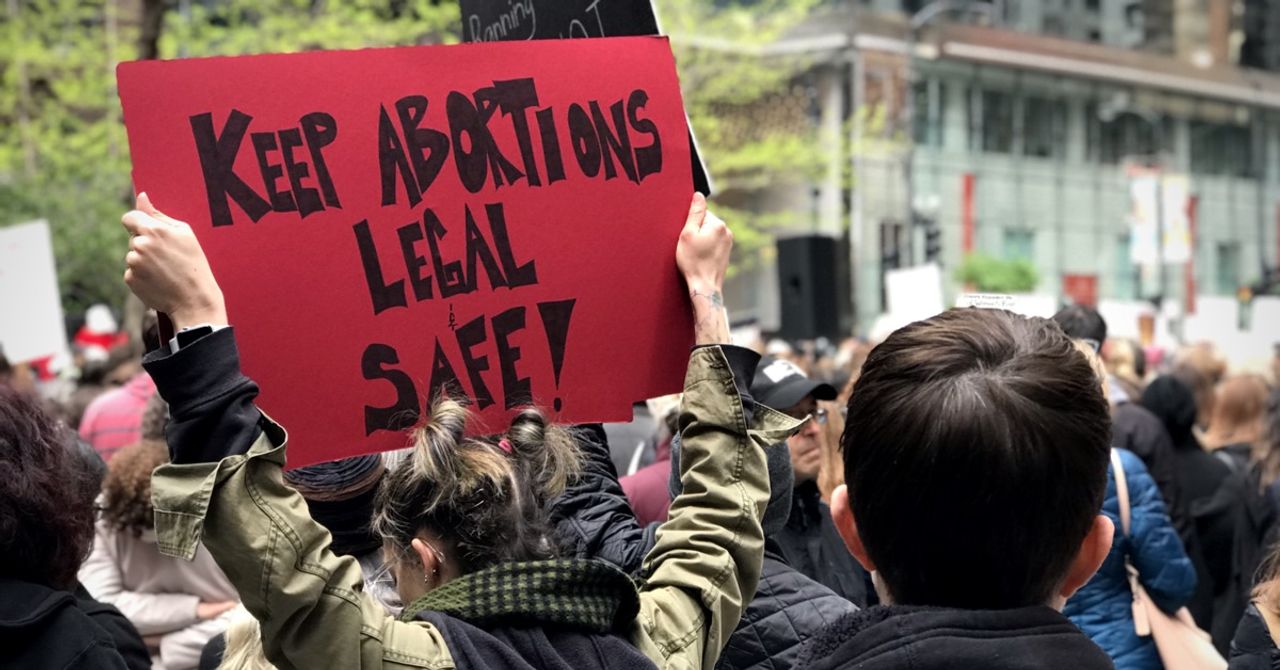 Thousands rally across the US to defend abortion rights

Thousands of people across the United States took to the streets on Tuesday to participate in protests and rallies in support of abortion rights. The nationwide protest was organized by #StoptheBans, a coalition of 50 groups including the American Civil Liberties Union (ACLU), Pro-Choice America, Planned Parenthood and the National Association for the Repeal of Abortion Laws (NARAL).

According to the organizers, there were more than 500 demonstrations, with events in all 50 US states plus Puerto Rico and Ottawa, Canada. The number of demonstrations, mobilizing students, workers and youth, reflected the broad popular support for the right of women to choose and in defense of democratic rights more generally. A CBS News poll published Tuesday showed more than two-thirds of Americans supporting Roe v. Wade, the 1973 Supreme Court decision barring states from outlawing abortion.

President Donald Trump is making opposition to abortion rights a major plank in his reelection campaign and has vowed to secure a reversal of Roe V. Wade. Tuesday’s protests were triggered by a series of newly enacted state laws, including in Georgia, Alabama and Missouri, directly challenging that seminal ruling by criminalizing abortion after six or eight weeks of pregnancy and imposing draconian prison sentences on health care professionals who perform the procedure outside of the arbitrary restrictions laid down in the legislation.

Most of these laws define a fertilized egg as a person, potentially making women who have abortions vulnerable to being criminally charged with child abuse, homicide or even murder. The explicit aim of the laws, which are all but certain to be blocked in the courts, is to force the US Supreme Court to reconsider Roe V. Wade. With the addition of two far-right anti-abortion justices appointed by Trump—Neil Gorsuch and Brett Kavanaugh—there is good reason to believe that the right-wing majority on the court may be prepared to overturn the 1973 decision. 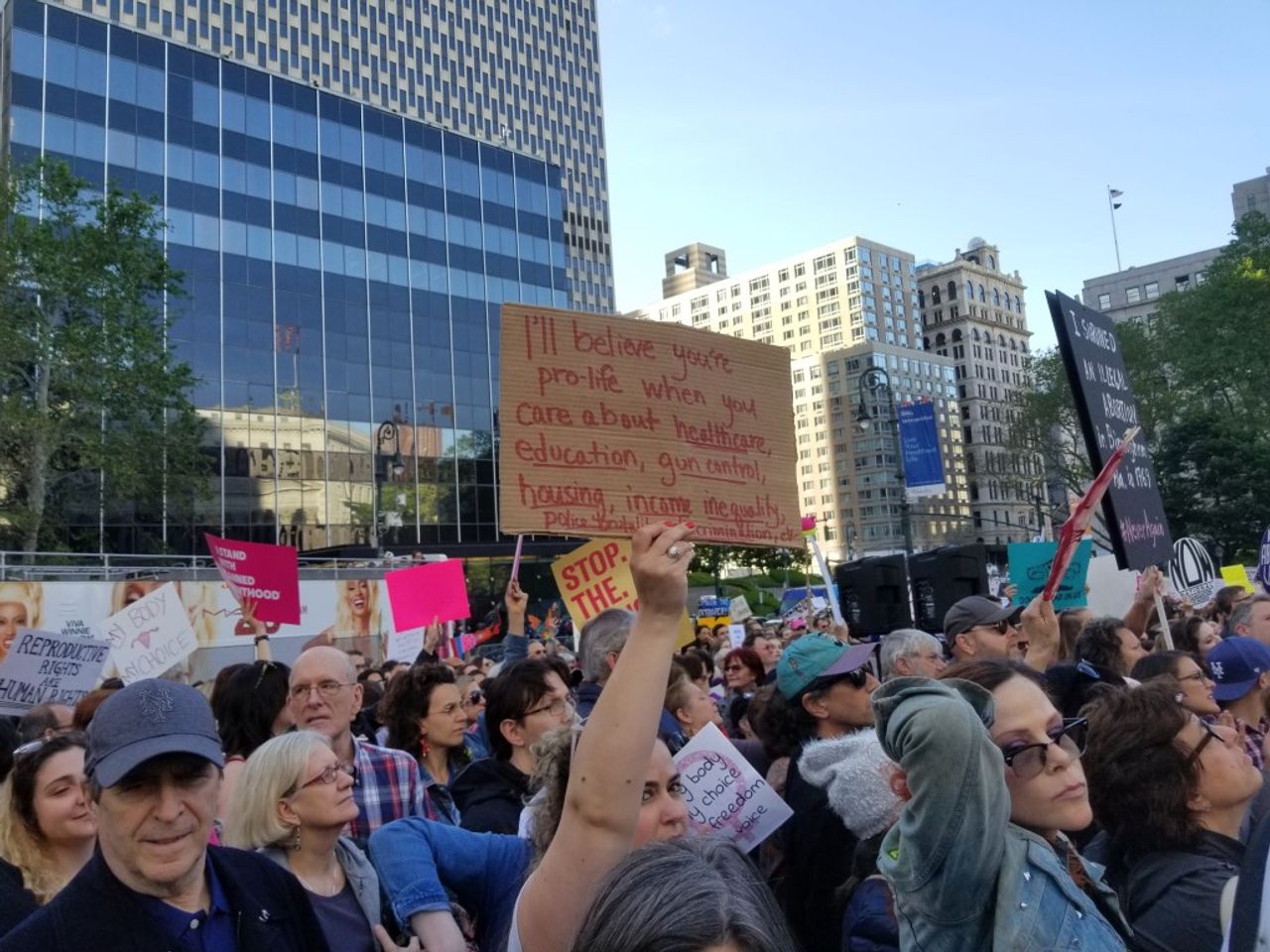 Members of the Socialist Equality Party (SEP) and the International Youth and Students for Social Equality (IYSSE) attended the rallies and distributed the statement “Mobilize the working class in defense of abortion rights.”

The organizations that sponsored the protests are linked to the Democratic Party, which politically dominated the events. …

But last year, the Democratic leader in the House of Representatives, Nancy Pelosi, declared that abortion rights would not be a “litmus test” for supporting Democrats running in the midterm elections. And the Democratic governor of Louisiana announced last Thursday that he would sign the anti-abortion bill working its way through the state legislature.

Some 1,000 protesters gathered in Foley Square in Lower Manhattan for a spirited and angry rally. Protesters chanted, “Pro-life is a lie, they don’t care if women die.”

The World Socialist Web Site spoke to Will from Queens, an office worker. “I am for a woman’s right to make the decision,” he said. “The government should not be involved, and I am sick of the hypocrisy of the right. They want to control a fetus, but as soon as it grows up to be 18, they ship it off to war.”

A WSWS reporter pointed out that the Democrats shipped young people off to war as well, and Will nodded vigorously. “That’s why I’m a registered independent. The Democratic Party has become corrupted.” 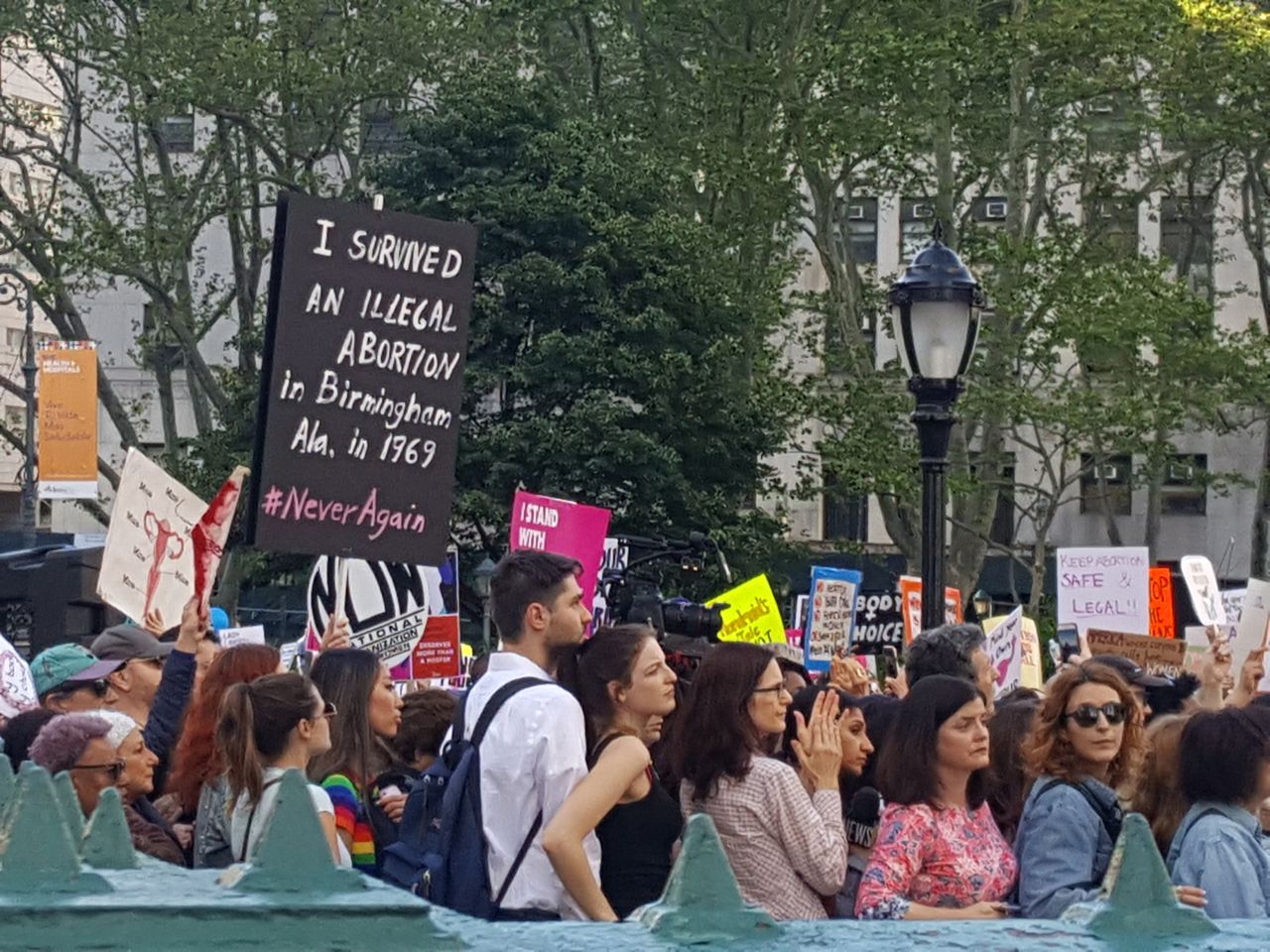 Amanda, a dog-walker who works in Manhattan, is originally from Louisiana. She said: “I’m disgusted by this attack on women and the fact that they want to ruin so many lives. I feel personally offended. I agree with mobilizing the working class. Most of the time it is working class women that suffer from restrictions on abortions.” 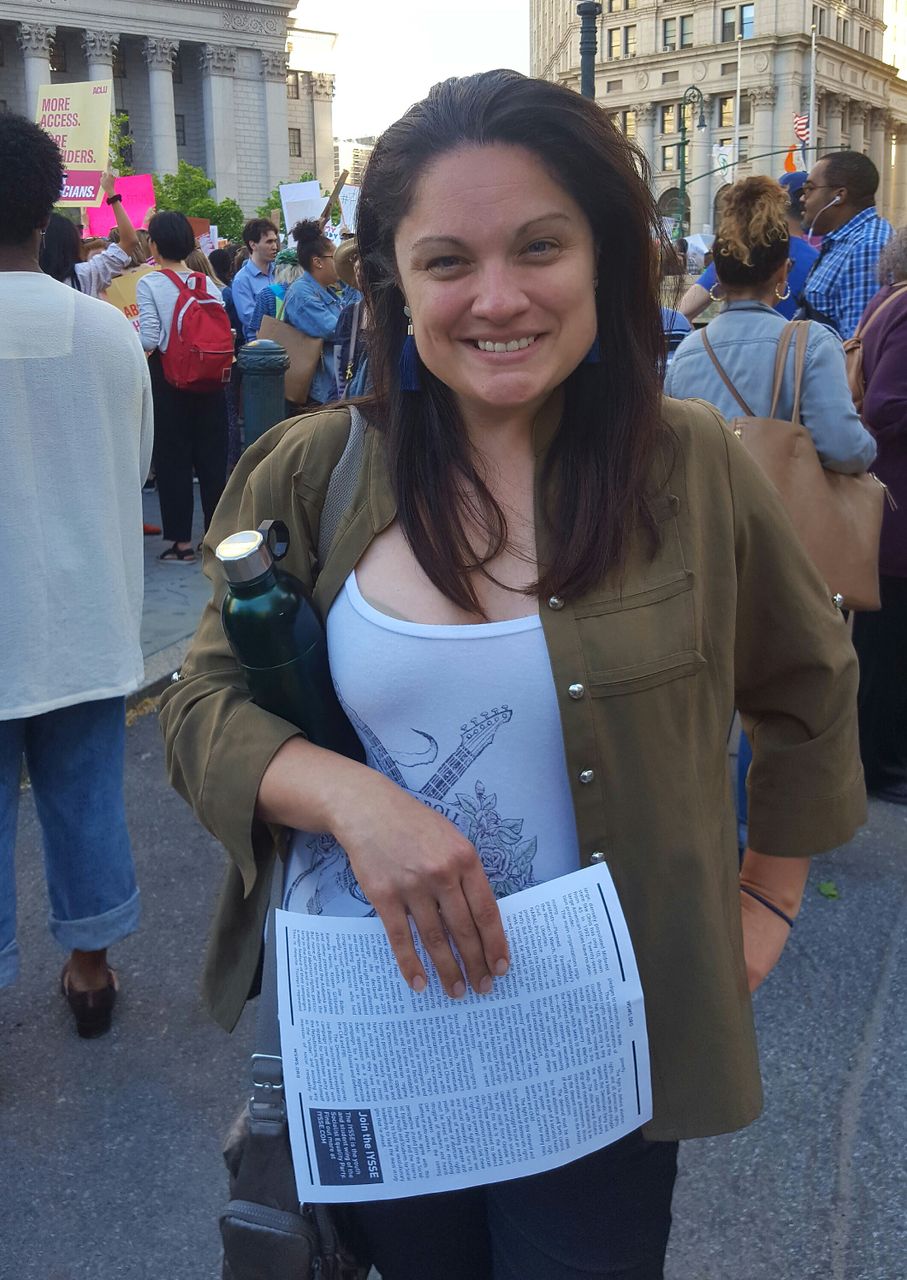 Ashley, a team leader at an NGO, said, “I am appalled by what is going on in Alabama, Missouri and Georgia. I am also disgusted with the idea that there is no exception for rape or incest. You need to trust women with their own health. We say it is New York, it can’t happen here. But I am not sure about that anymore.

“If it was actually about life it would look a lot different. In our country, we don’t do well for women’s health. I was just reading that Alabama has a high infant mortality rate, and there is a crisis in health care for women across the board.

“I was reading that roughly 70 percent of the population supports a woman’s right to choose. I personally am for Medicare for all. Even if they are not necessarily for that, across the country polls show that most people are concerned about health care. That should be the focus.”

A rally in Westwood, Los Angeles attracted a large contingent of High School students. One spoke anonymously, saying, “This is a completely unconstitutional ban on reproductive rights and will make abortion inaccessible for the community. It’s going to affect the poor and underprivileged like people of color the most.”

Anna Weiss, a high school student, told the WSWS, “When I saw what happened I got very scared. It was terrifying to me. I was angry, hopeless, and having this rally here really inspired me to go out and show my support.

“This definitely affects working class people the most. If working class women can’t get an abortion, then it’ll be harder for them to finish high school and college and be able to be successful in life.”

Some 200 people attended the noon rally at Legislative Plaza in Nashville. Representatives from Planned Parenthood and the ACLU spoke, along with women who shared their own stories. No elected officials participated. 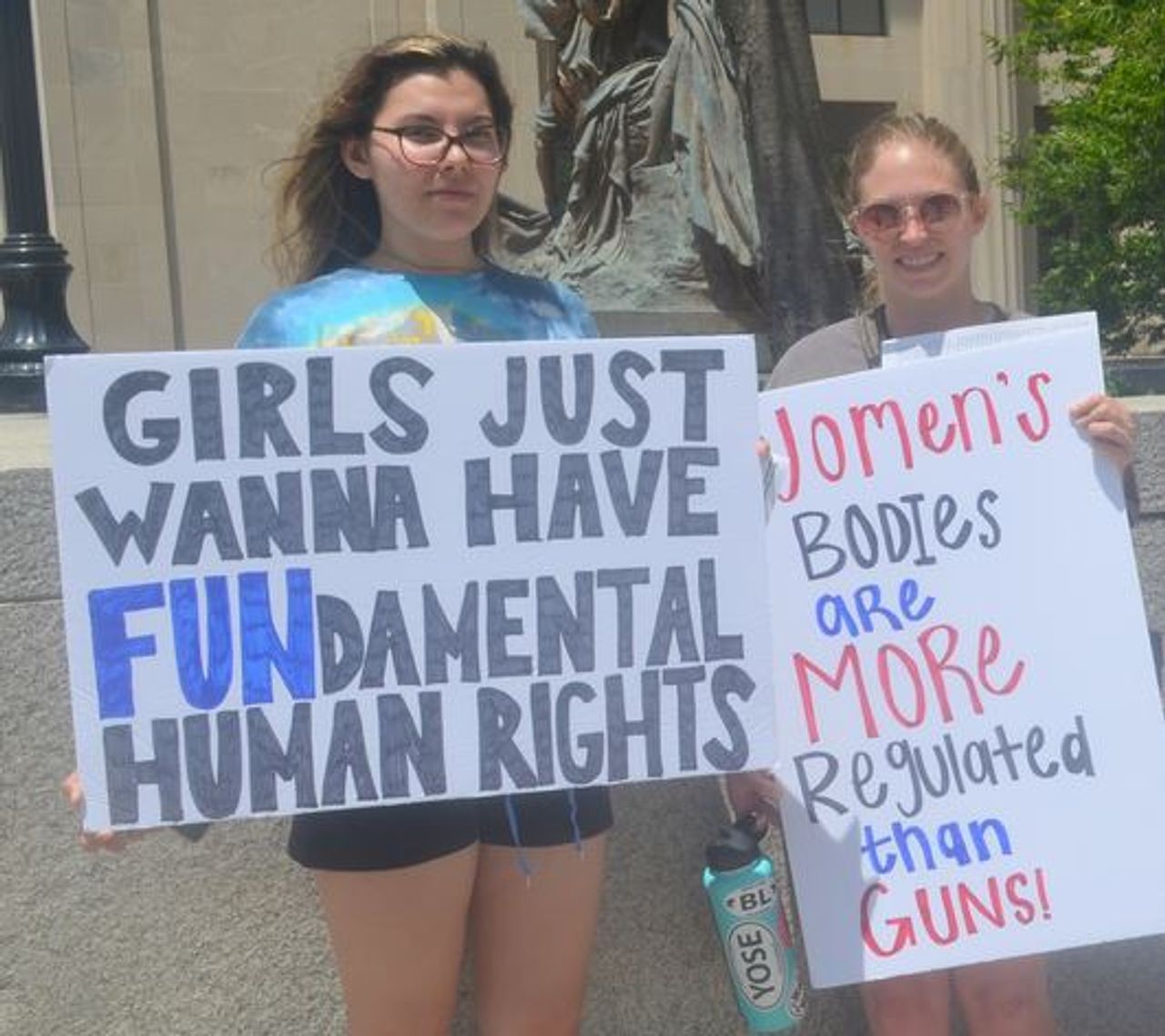 “Class is definitely an issue,” said Raeven Offutt, 25. “If abortion rights are taken away, people with money may find a way to have safe abortions, but for the lower class, they won’t have the means to have a safe abortion or to take care of themselves.”

“We have people challenging our safety, our right, what we have access to, and that’s scary. That makes me angry, and that’s what brought me here today,” said Kaycee Whiteside, 25.

Around 2,000 people attended a rally at the University of Michigan in Ann Arbor.

Mario and Erinna came to the rally with their young daughter. Erinna said, “I want there to be the right to an abortion. I think it’s crazy that it’s still something that should be debated.”

She responded strongly to the emphasis of our reporters on the question of class. “It’s expensive to get an abortion! It’s thousands of dollars. And what if people need it for medical reasons?”

Mario added, “It’s about the money. We are electing individuals that are funded by the corporations. The US is based on capitalism and money. I agree that we need our own party.” 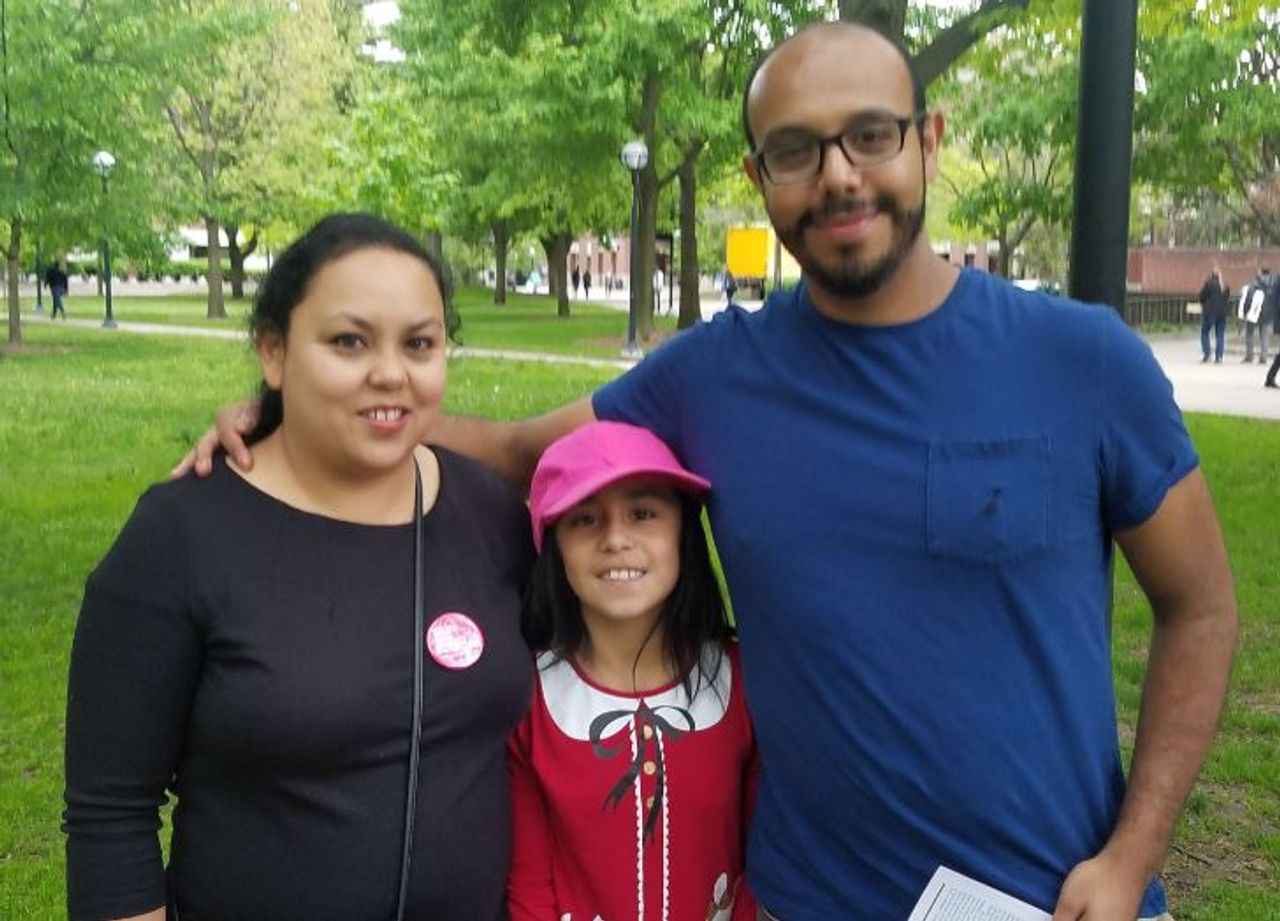 WSWS campaigners explained that the right to an abortion is fundamentally tied to the fight for socialism and the reorganization of society.

“The economy should be planned scientifically and rationally,” Mario said.

Gina and Andrea are graduates from Eastern Michigan University. “Keep abortion safe and legal,” said Gina. “Otherwise, women will die of unsafe abortions.” Andrea added, “Also, there will be silencing of women who are victims of incest.”

LAWSUIT: ‘CONSCIENCE’ RULE UNDERMINES HEALTH CARE Two dozen U.S. states and municipalities sued the Trump administration to stop it from enforcing a rule that would make it easier for doctors and nurses to avoid performing procedures like abortions, sterilizations and assisted suicide on religious or moral grounds. [Reuters]

ABORTION PROVIDERS FEAR FOR THEIR SAFETY As a re-emboldened anti-abortion movement has emerged, buoyed by recent legislative victories in Alabama, Georgia, Ohio, Kentucky, Mississippi, Missouri, Utah and Arkansas, those who work to protect abortion rights are on high alert for their safety.   [HuffPost]

Louisiana Governor John Bel Edwards, a Democrat, on Thursday signed an abortion ban that would prohibit women from terminating a pregnancy once a fetal heartbeat has been detected. The state House of Representatives passed the ban on Wednesday in a bipartisan vote after the state Senate had approved the bill earlier this month: here.

ADMINISTRATION MOVES TO HALT FETAL TISSUE RESEARCH The Trump administration announced new rules that will sharply reduce and possibly end government funding for studies that use tissue from aborted fetuses. Such research has been instrumental in developing treatments for polio, cystic fibrosis, hemophilia, and other conditions. [HuffPost]