This music video from the USA says about itself:

Barenboim conducting the Chicago Symphony Orchestra in a stellar performance of Tchaikovsky’s 4th Symphony in F minor for the opening concert of Carnegie Hall’s 1997 season. Yes, that is the legendary Bud Herseth marshalling the CSO’s incredible brass.

By Kristina Betinis in the USA:

“This is not just about Tchaikovsky, it’s about culture as a whole”

Chicago Symphony Orchestra (CSO) musicians went on strike Monday morning for the second time since 2012. The contract agreed between CSO and the Chicago Federation of Musicians Local 10-208 in 2015 expired on Sunday. Negotiations had been going for more than 11 months.

Historically, CSO labor agreements have established the wage and benefit standard for top-tier orchestras, so CSO negotiations are closely watched. 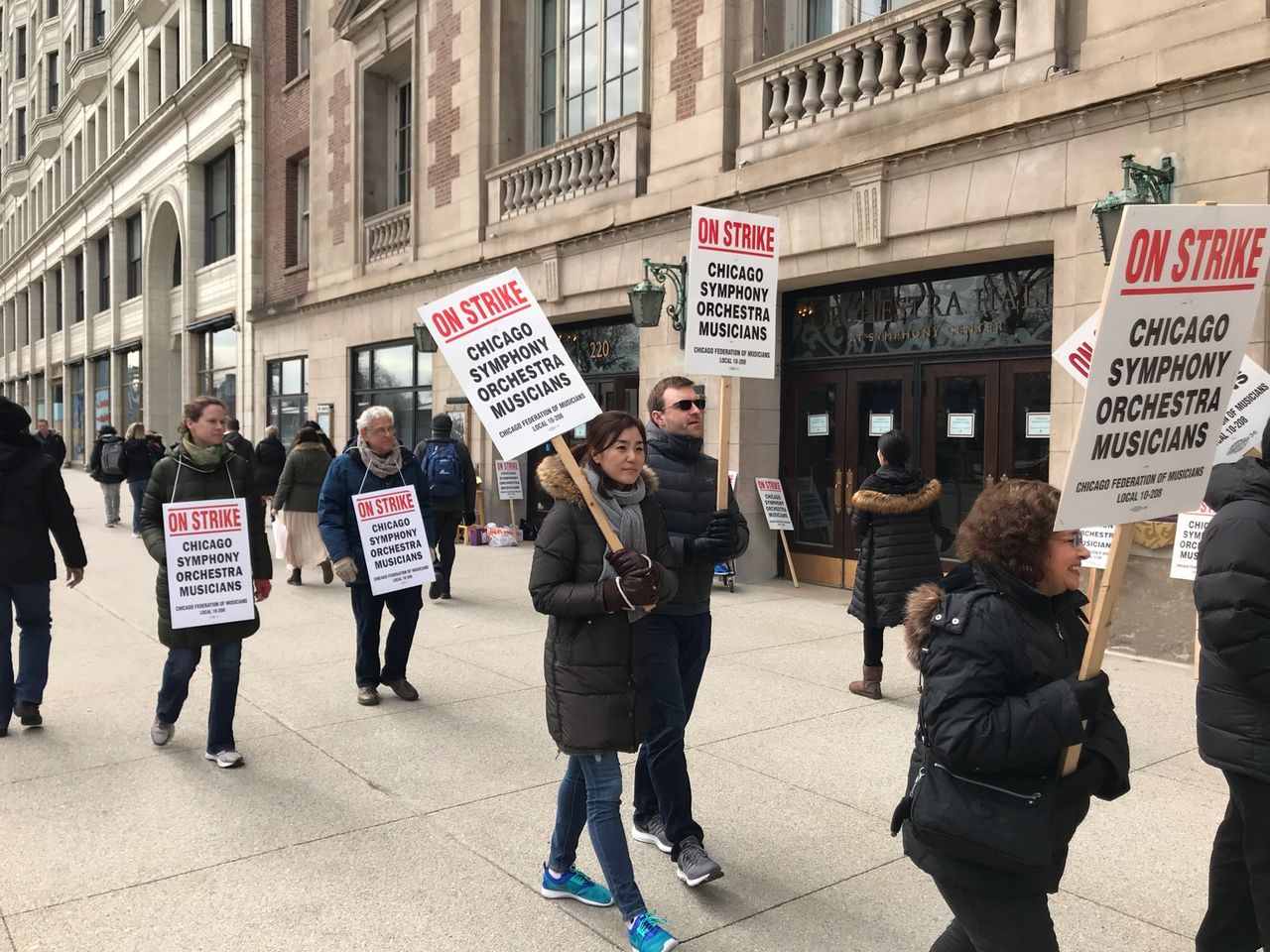 In 2018, CSO management reported their best year ever in ticket sales, but have complained that the orchestra’s budget is straining under pension costs. However, ticket sales only support a small portion of the orchestra’s costs. To a large extent, the symphony is beholden to the whims of wealthy corporate and private benefactors for its financing.

Among those declaring their support for the musicians has been CSO Director Riccardo Muti, who wrote, “As music director and a musician of this orchestra, I am with the musicians.”

Under the current offer, musician base pay will rise five percent over the three-year term of the contract, which breaks out as a one percent increase in the first year to be followed by two percent increases the following two years, well below the rate of inflation. 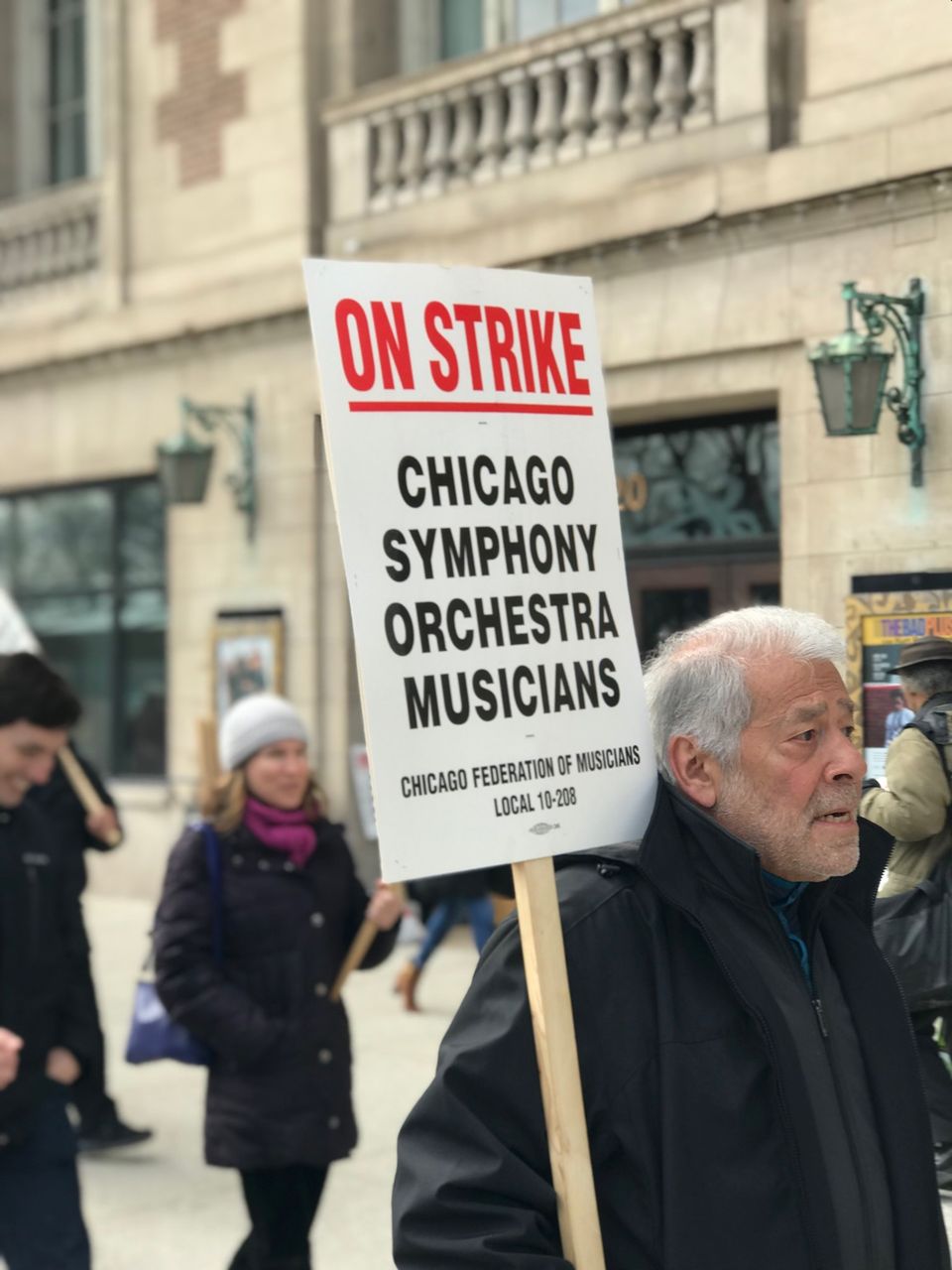 But the main issue in the strike is CSO management’s proposed move from a defined pension benefit plan—or traditional guaranteed pension—to a direct contribution plan, an investment fund that is up to each individual member to manage.

Helen Zell, wife of billionaire Chicago real estate mogul Sam Zell, was chosen to chair the CSO Board in 2015. Zell and CSO Board President Jeff Alexander are insisting on the pension cuts to maintain the organization’s solvency.

CSO management stated that the orchestra contributed $3.8 million into the musicians’ pension fund this year—up from $803,000 two years ago because of new federal requirements—and that those annual contributions were projected to continue to rise.

The New York Times reported that the American Federation of Musicians and Employers’ Pension Fund, a large, multi-employer plan covering thousands of musicians, including the Chicago Federation of Musicians Local 10-208, is itself currently “in critical status.” According to that report, if the pension fund’s condition worsens, it could trigger pension benefit payment cuts for retirees.

In 2016, the $2 billion pension fund declared a $122 million shortfall, and was hit the following year with a class-action lawsuit claiming fund trustees made risky investments, placing the pensions of thousands of musicians in jeopardy.

Some Lyric Opera musicians were picketing with the Chicago Symphony members on Monday.

Michal, who has been a violinist 22 years, joined the Chicago Symphony Orchestra three years ago. He told the WSWS, “We’re striking because management is cutting our pension and has also been stalling wages since the 2012 strike. Management wants to cut the pension because they claim the pension has been underfunded—but it has been done by them. They claim that for people like me, who’ve been here three years, it will be a way better benefit—which I can’t dispute, I mean who knows? But it will mean everything is on me to manage that and everything depends on how I do it.

“The bigger problem is the people who have been here for somewhere between 15 and 25 years. For them it just doesn’t make any sense because the benefit they would get, what they have worked for, would be small because they would basically have no time to build up their 401Ks.

“The pension is one of the things that makes the Chicago Symphony Orchestra a place musicians want to work. I auditioned here against 300 other people. I didn’t spend 20 years practicing five hours a day to get here and then have to go get a desk job.

“I’ve had to do this for 20 years to get here. I could go get a different job at any time, but this is what I should be doing.”

Gina, a filmmaker, was on Michigan Avenue supporting the striking orchestra members. She told the WSWS, “I think fully funding the arts is incredibly important. I just graduated from Columbia College right down the street here. It’s an issue in the film industry too, because lots of times people are on contract work.

“You’ll be working months and months on a project, and you might not necessarily, depending on what the budget is, have benefits. Certainly not pensions. It’s incredibly important because people are putting their life and their soul into these works, for the entertainment and appreciation of people.

Michal broke in to say, “This is not just about Tchaikovsky, it’s about culture as a whole. This country spends trillions of dollars on the weapons industry, wars that we have been losing. And how much money goes to culture? Think of what the word itself means, to cultivate.”

Gina said, “This reminds of the quote from the film Dead Poets Society: “We don’t read and write poetry because it’s cute. We read and write poetry because we are members of the human race. And the human race is filled with passion. And medicine, law, business, engineering, these are noble pursuits and necessary to sustain life. But poetry, beauty, romance, love, these are what we stay alive for.

“The irony is that people agree but these things are not supported in the society.”

Chicago Symphony Orchestra (CSO) musicians are continuing their strike, which began Monday morning. The contract agreed between CSO and the Chicago Federation of Musicians Local 10-208 in 2015 expired on Sunday. Negotiations had been going for more than 11 months and no new negotiations have been scheduled. CSO Director Riccardo Muti spoke at a lunch hour press conference on Tuesday, surrounded by the horn section of the CSO. “I am here with my musicians,” Muti said, who is known worldwide for his public defenses of funding for the arts and opposition against budget cuts in his home country of Italy: here.

The strike by Chicago Symphony Orchestra (CSO) musicians is now in its second week with management cancelling performances through March 25. Little progress in negotiations has been reported and musicians conjecture online that the strike may go on for weeks or months. In 1982 the Chicago musicians conducted a 21-day strike and a 15-day strike in 1991: here.