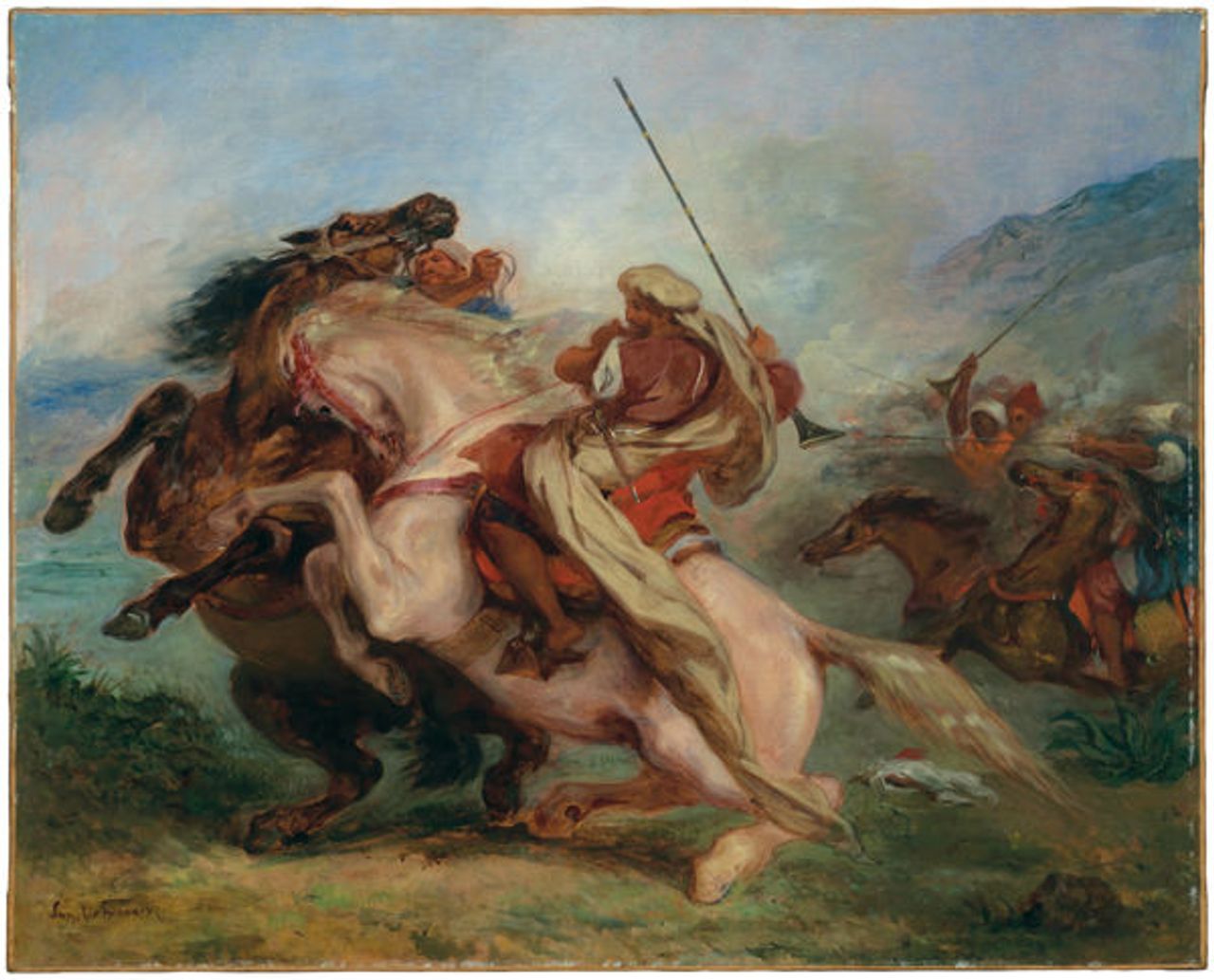 By Clare Hurley in the USA:

Delacroix —an exhibition at the Metropolitan Museum of Art, New York City

Organized by the Louvre Museum in Paris, where it attracted a record-breaking number of visitors earlier this year, and currently at the Metropolitan Museum in New York City, this powerful exhibition of French Romantic painter Eugène Delacroix (1798–1863) is the first major survey of the artist’s work in half a century. It brings together 150 paintings, drawings, prints and manuscripts that have rarely been shown together, many of them never before displayed in the US at all.

Unfortunately, due to the work’s size, Delacroix’s iconic image of triumphant revolution, Liberty Leading the People (1830), could not be transported to the Met. Its absence is sorely felt, in part because the exhibition, encompassing the scope and variety of Delacroix’s prodigious artwork, underscores the atypical character of Liberty. Never again would the painter address the events of his time so directly. 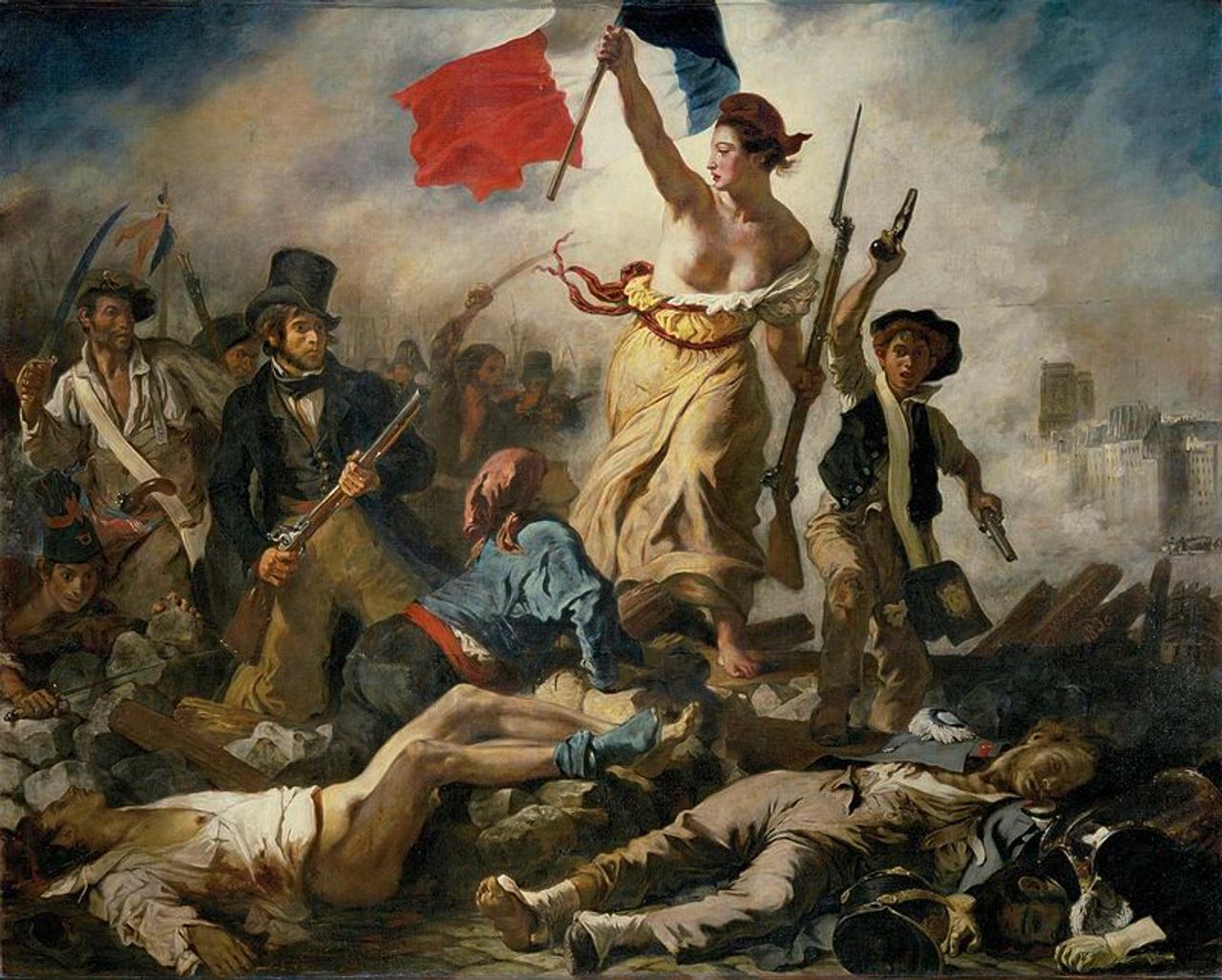 The figure of Liberty rallying the Parisian masses behind the tricolor of “liberté, égalité, fraternité” calls to mind the ideals and events of the French Revolution of 1789. A generation later, Delacroix’s painting tackled the subject in a manner that embodied the transition from the Neoclassicism of the Revolutionary period to a Romantic sensibility, reflecting the impact of subsequent developments on artistic moods and consciousness. 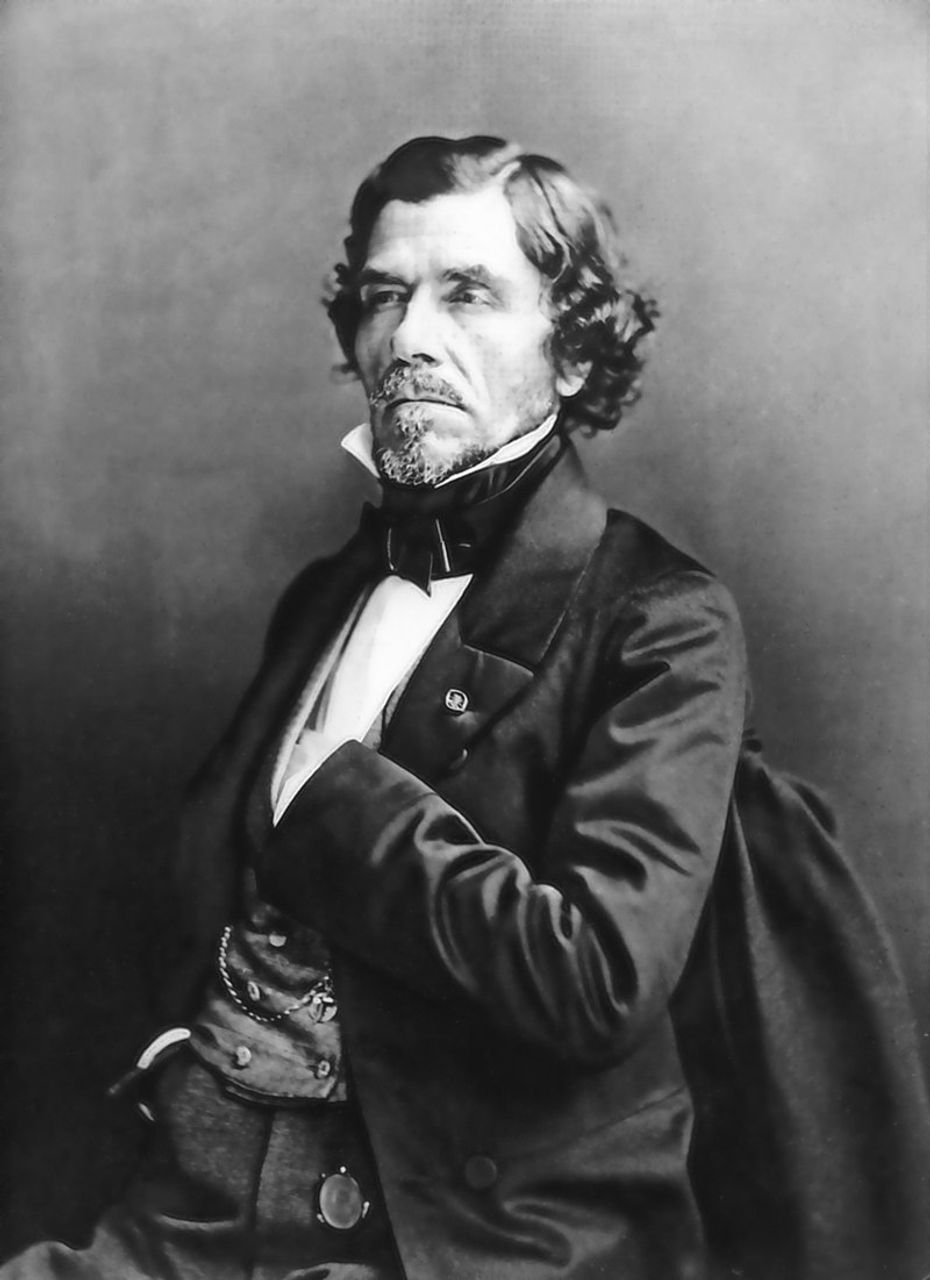 Romanticism was a diffuse movement particularly significant in European art between the end of the 18th century and 1840 or so. In part, it was a critical reaction to the Industrial Revolution and the apparent mechanization and urbanization of life. The Romantics often valued nature and emotional expressiveness in art, including extreme emotions. Great emphasis was placed on authenticity and sincerity, and on the “inner vision” of the solitary artistic genius, if necessary at the expense of rationalism and empirically accurate representation.

Originating in English poetry with the work of Lord Byron, William Wordsworth (who suggested that poetry should begin as “the spontaneous overflow of powerful feelings”), Samuel Coleridge, John Keats and Percy Bysshe Shelley, Romanticism encompassed the other arts as well: the music of Franz Schubert and Frédéric Chopin, for example. Delacroix was “the great Romantic painter” as his younger contemporary, the poet and critic Charles Baudelaire (1821-1867) termed him.

However, Delacroix rejected this title in his lifetime, considering that his work carried on the ideals of the Enlightenment, even as he often created turbulent, expressive images more characteristic of Romanticism. He shared the Romantics’ dedication to art’s higher purpose to evoke the sublime and awe-inspiring and championed the power of the unfettered artistic imagination to create a “pure” art drawn from classical, literary or historical sources. In a 1822 letter, Delacroix insisted, “Painting is life itself. It is nature transmitted to the soul without an intermediary, without a veil, without rules or conventions. Music is vague. Poetry is vague. Sculpture requires a convention. But painting, particularly landscape painting, is the thing itself.”

Delacroix’s life and work contain various strands and impulses. He was connected to leaders of the French Revolution on his father’s side, and to artistic circles on his mother’s, as well as having a powerful patron in the consummate cynical politician Charles-Maurice de Talleyrand, rumored to be his biological father. Orphaned at the age of sixteen, he demonstrated exceptional talent and trained in the Neoclassical tradition of Jacques-Louis David (1748–1825), the preeminent painter of the French Revolution. He was also influenced by early Romantic Théodore Géricault (1791–1824) with whom he studied, even posing as one of the doomed castaways in his mentor’s masterwork, The Raft of the Medusa (1818-9). He was in his early twenties when his painting The Barque of Dante was accepted into the Salon of 1822, inaugurating a long career of purchases and commissions by the French state, though one not without controversy and occasional rejections when his work diverged too far from the standard “recipes” of the Academy and middle class public opinion. 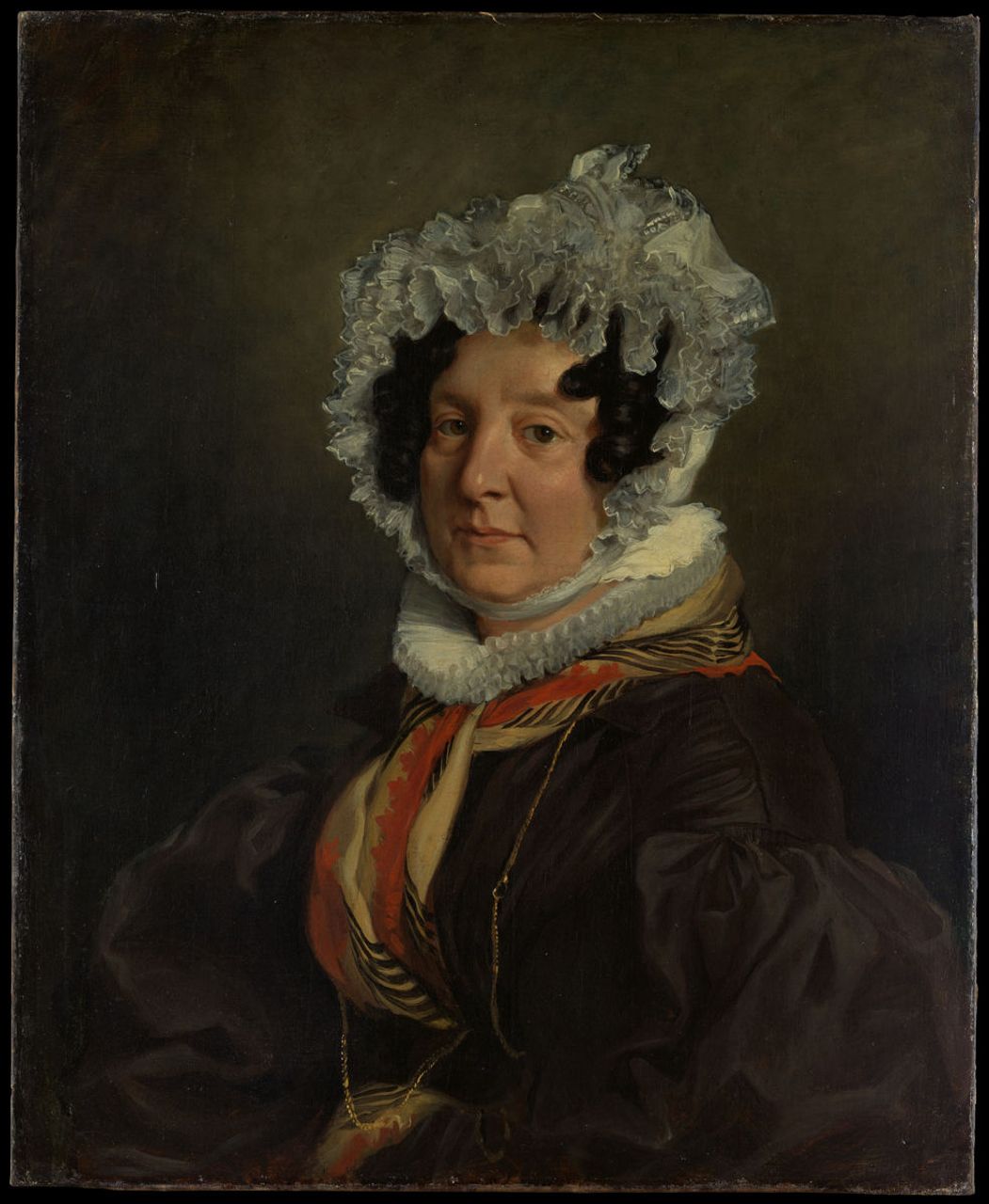 His mastery of academic skills is evidenced in the Met exhibition in the selection of his vivid portraits, such as the ones of his aunt and cousin Madame Henri François Riesener and Léon Riesener (both painted 1835), and his many sketches and oil studies of models. Some of these, Head of an Old Greek Woman (1824) for instance, are striking in their own right, though for Delacroix these always served primarily as means to an end. In this case, the woman’s anguished face appears in his Massacre at Chios (1824), also too large to be moved from the Louvre. However, Greece on the Ruins of Missolonghi (1824) is in the exhibition. 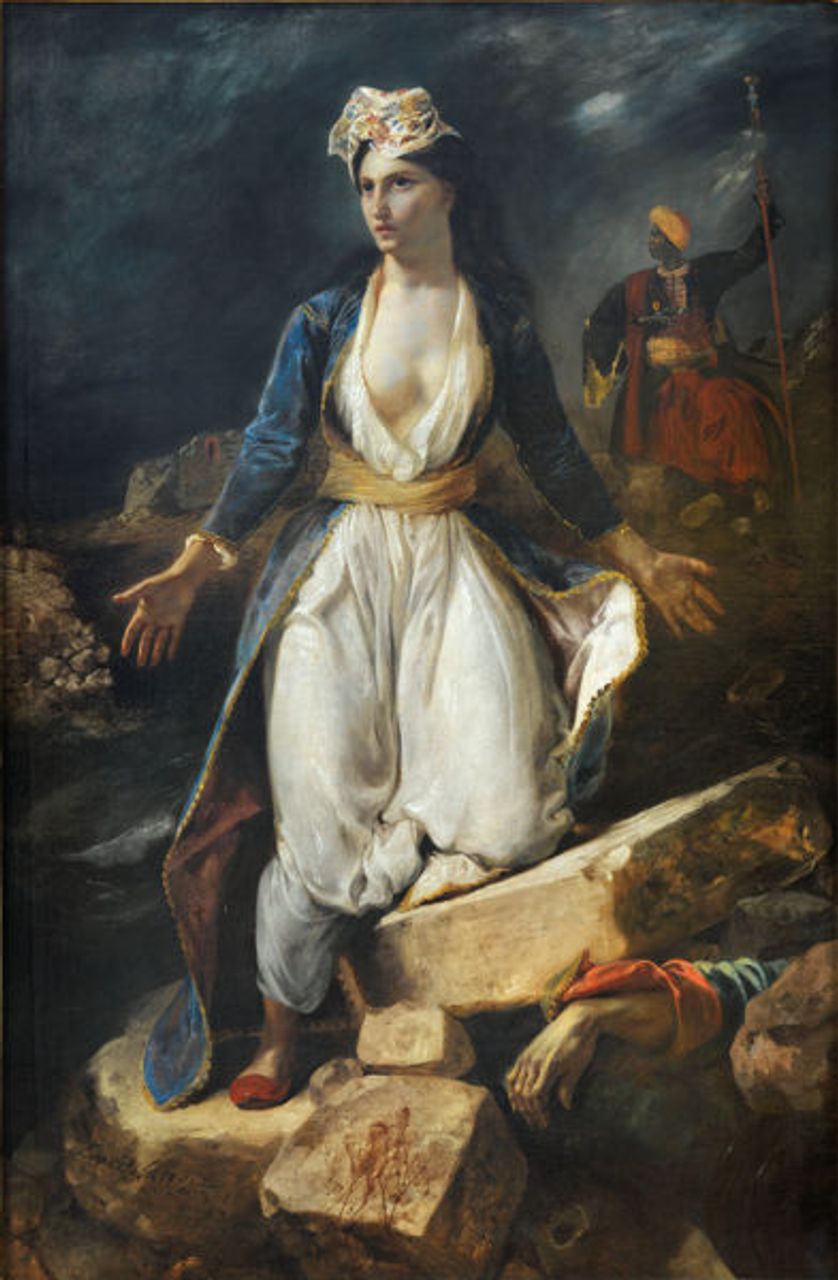 Even though Delacroix’s paintings in support of the Greek struggle for independence from the Ottoman Empire (1821-29) were purchased by the French government, which—along with Britain and Russia—was asserting economic interests in the Middle East through its intervention, they nevertheless came in for criticism for their emphasis on the conflict’s toll in human suffering instead of the supposedly heroic aspects of the cause.

Delacroix often turned to literary sources for subjects, particularly to works by Lord Byron and Sir Walter Scott, as well as Shakespeare. Most striking in the exhibition is the series of 18 lithographs that Delacroix created in 1826-27 to illustrate the German poet and dramatist Goethe’s Faust. The set of prints not only superbly illustrate the wild, supernatural tale of the doctor who sells his soul to the Devil in exchange for unlimited knowledge and worldly pleasure; they demonstrate Delacroix’s mastery of a relatively new technique in printmaking. They also include charming sketches of animals and other notations in the margins which would not have appeared in the large folio edition printed in 1828, a copy of which was also on display. 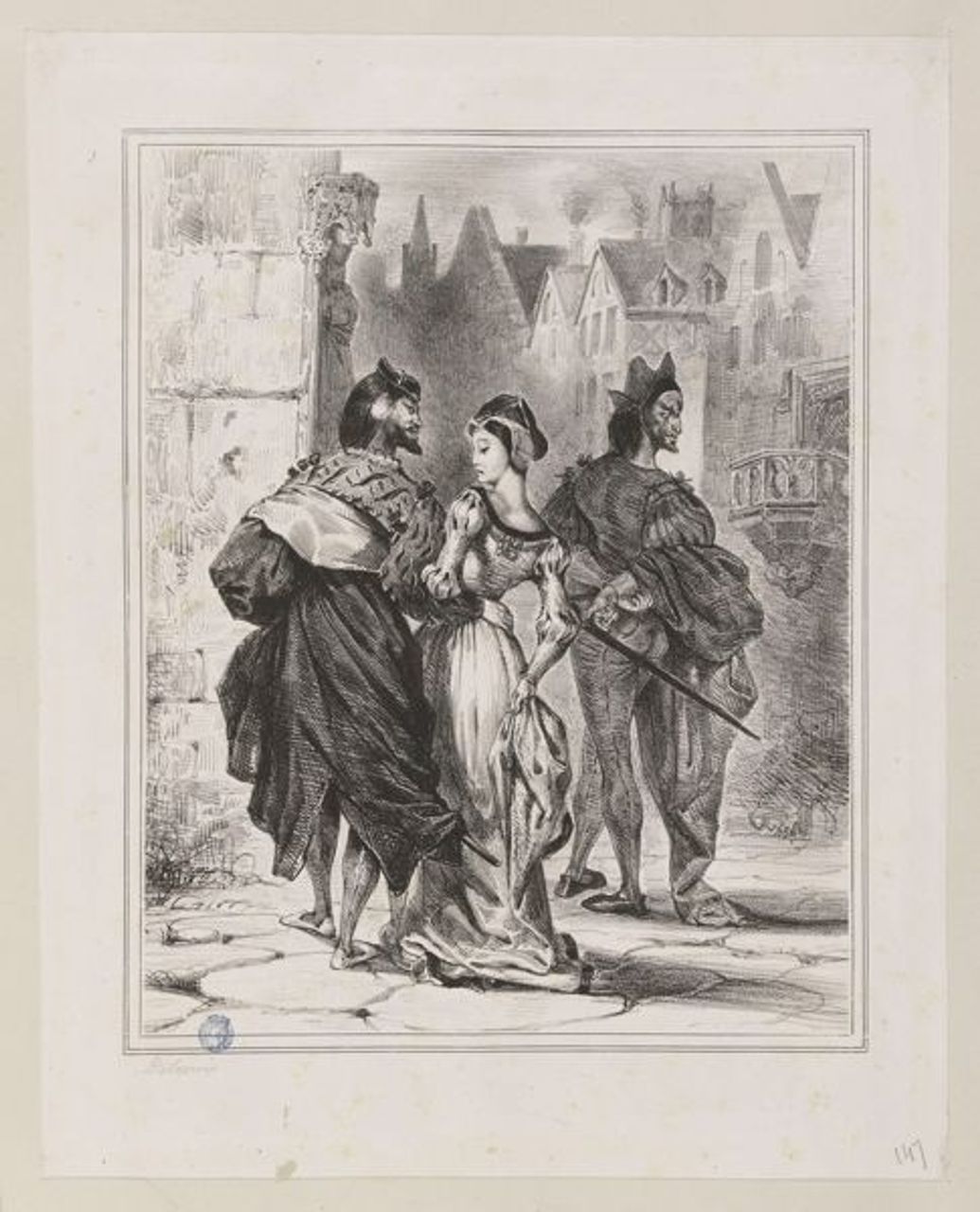 Much of Delacroix’s work was on a grand scale commissioned for public buildings and churches, and as such could not be moved. But the exhibition does include The Battle of Nancy and the Death of Charles the Bold, Duke of Burgundy, January 5, 1477 (1831) and The Battle of Poitiers (1830), both of which celebrate the Bourbon monarchy. However much the painter sought to distance his art from the immediate political fray by choosing subjects from the distant past, he inevitably had to navigate the shifting political fortunes of his patrons. In the case of the latter painting, it had been commissioned by the Duchesse du Berry, daughter-in-law of the last Bourbon monarch, Charles X. Delacroix had to repossess the work, unpaid for, after Louis Philippe ousted the Bourbons in the 1830 July Revolution and the Duchesse fled. 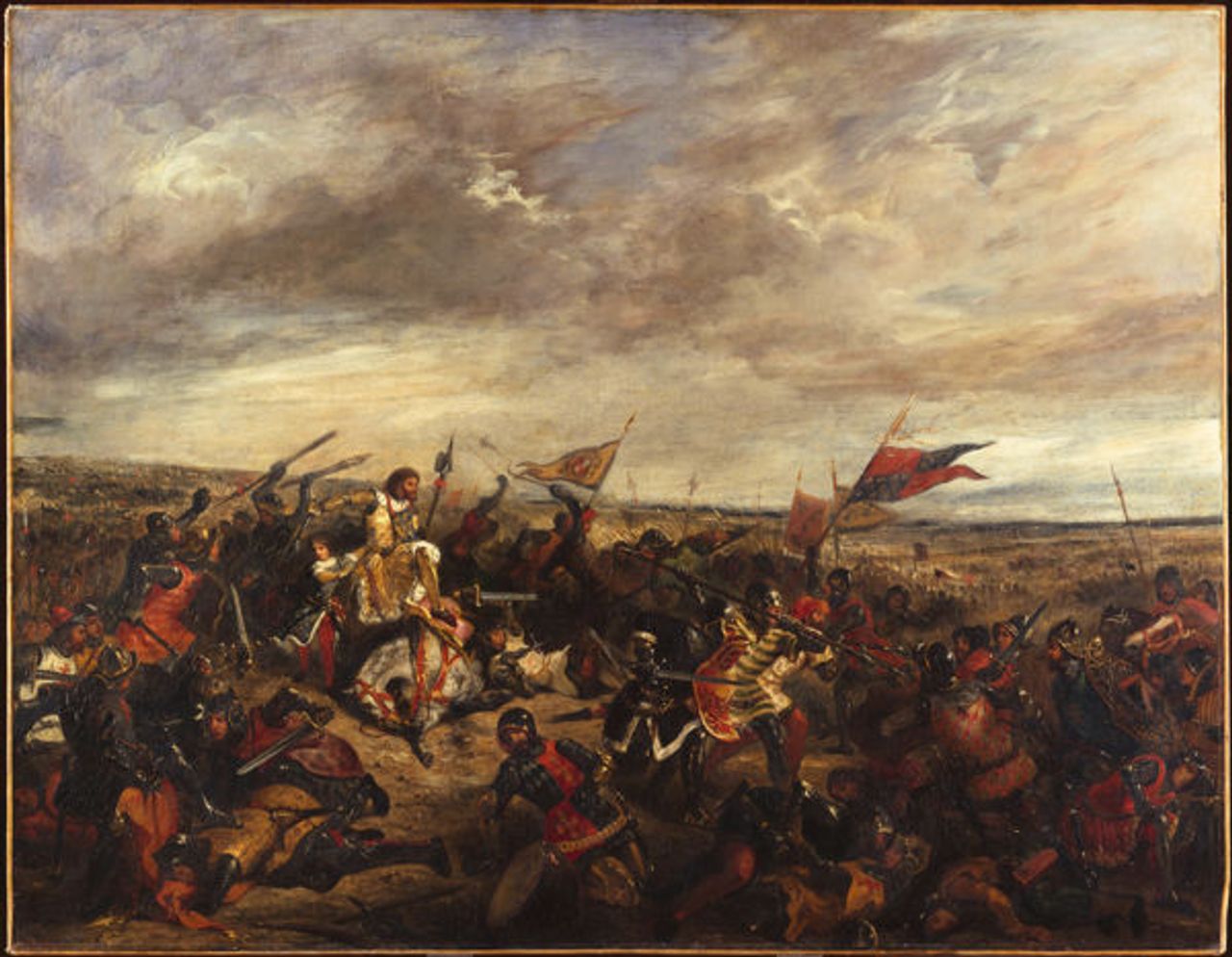 Whether it was to escape the social and political turmoil of Paris after the July Revolution or the desire for a change of scene, in 1832 Delacroix traveled to North Africa as part of a diplomatic mission to Morocco shortly after the French conquered Algeria. There he was entranced by the beauty of the landscape and the people in traditional dress, a scene so “exotic” that he had no need to resort to imagination.

A selection of his marvelous sketches of people in the streets of Tangiers are displayed at the Met exhibit. Although his observations were colored by his Romantic propensity to view the Arab shopkeepers in their white robes as modern-day incarnations of classical Greek or Roman figures, these sketches capture daily life with an immediacy not found in any of his other work. 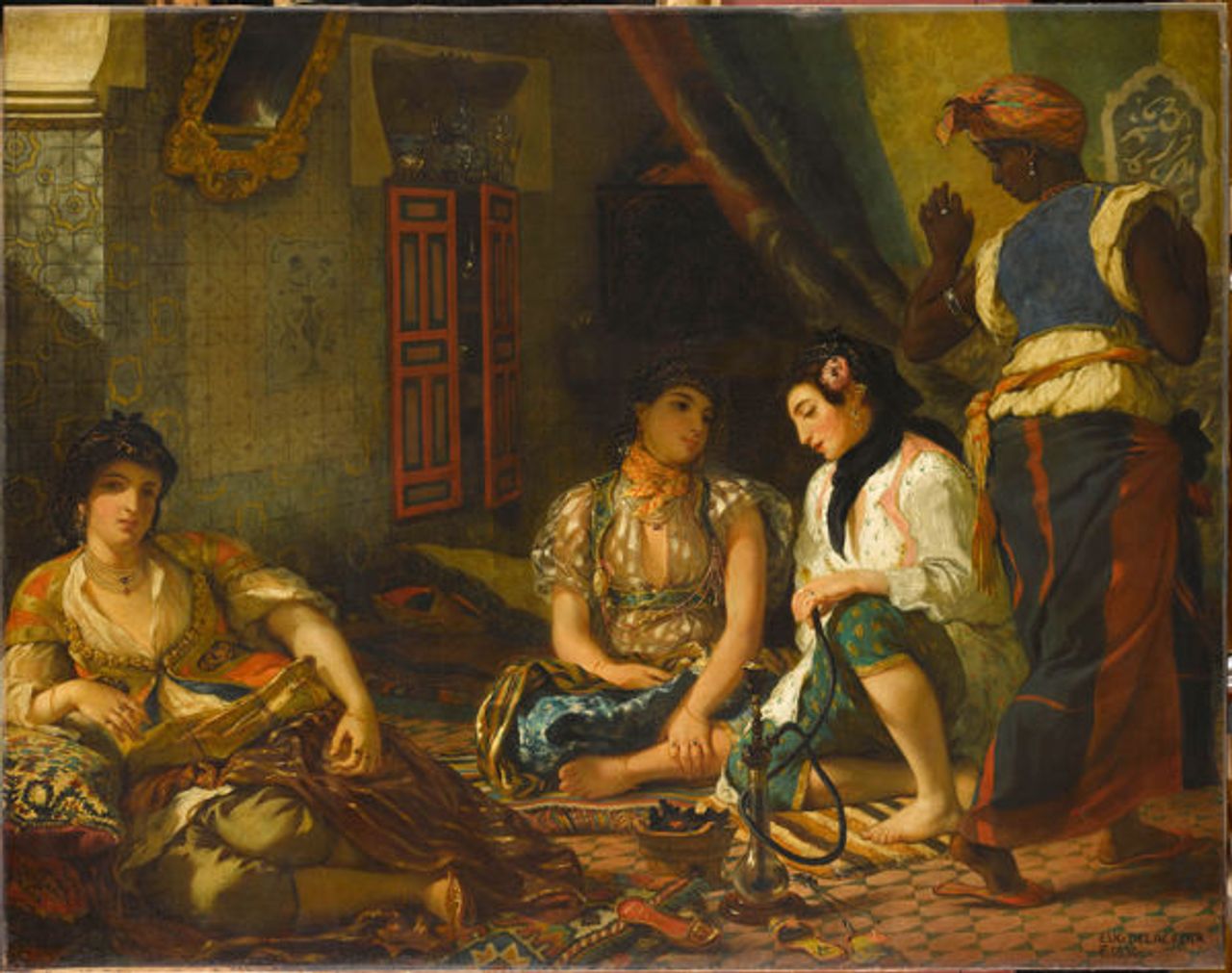 Painted upon his return to Paris, Women of Algiers in their Apartment (1834) is certainly a work of imagination since Muslim law would have made it unlikely for him to have observed women in the intimacy of such a setting. Art historian Linda Nochlin in her essay “The Imaginary Orient” (1983) argues that such images of the Arab world served as the pretext for Western European men to indulge their erotic, and in the case of Delacroix’s earlier Death of Sardanapalus (1828), sadistic fantasies of power over their colonial conquests. Be that as it may, the sumptuous color—achieved by Delacroix’s juxtaposition of complementary tones—contributes to the seductive quality of the three women attended by a black servant in the cloistered atmosphere of the room. 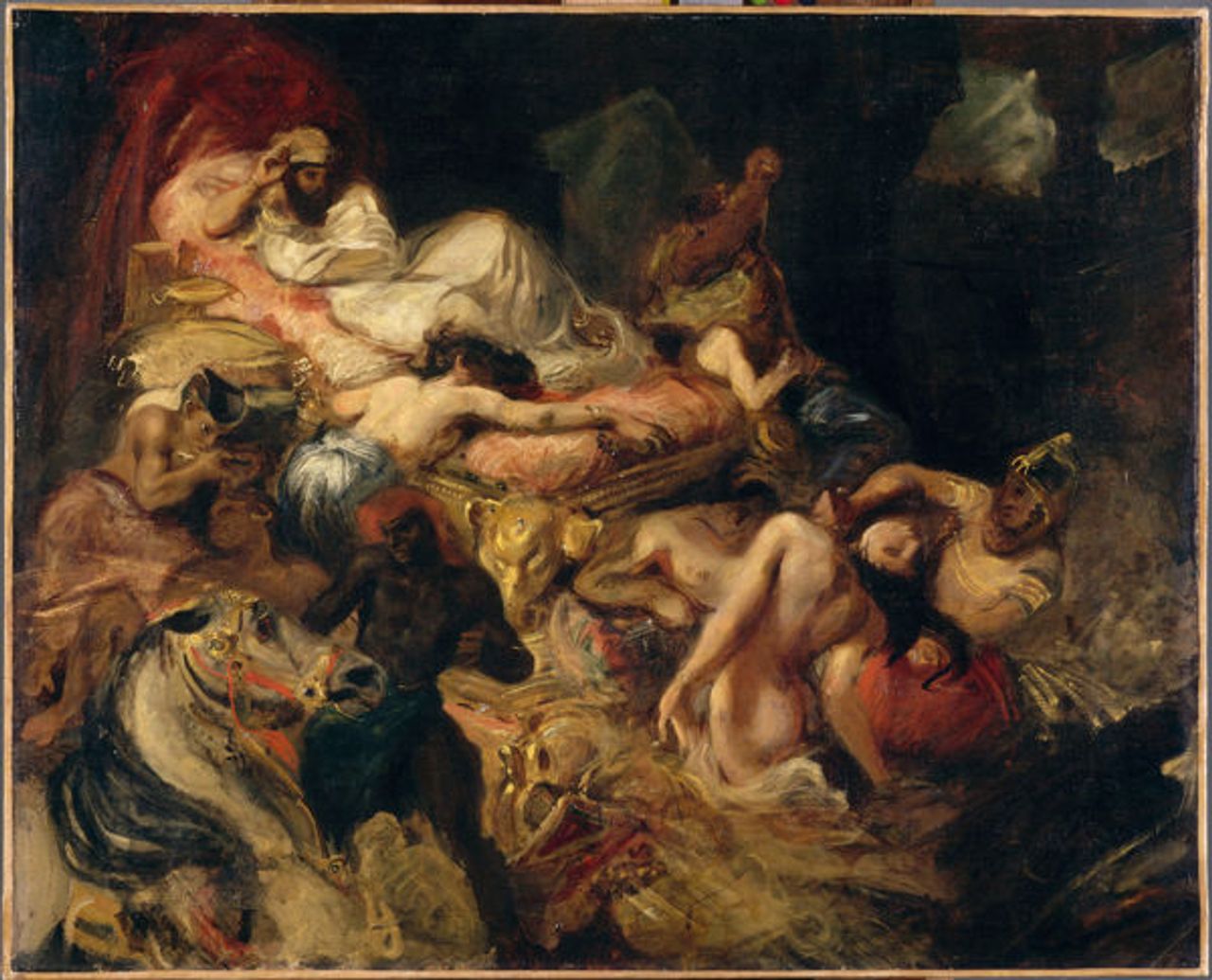 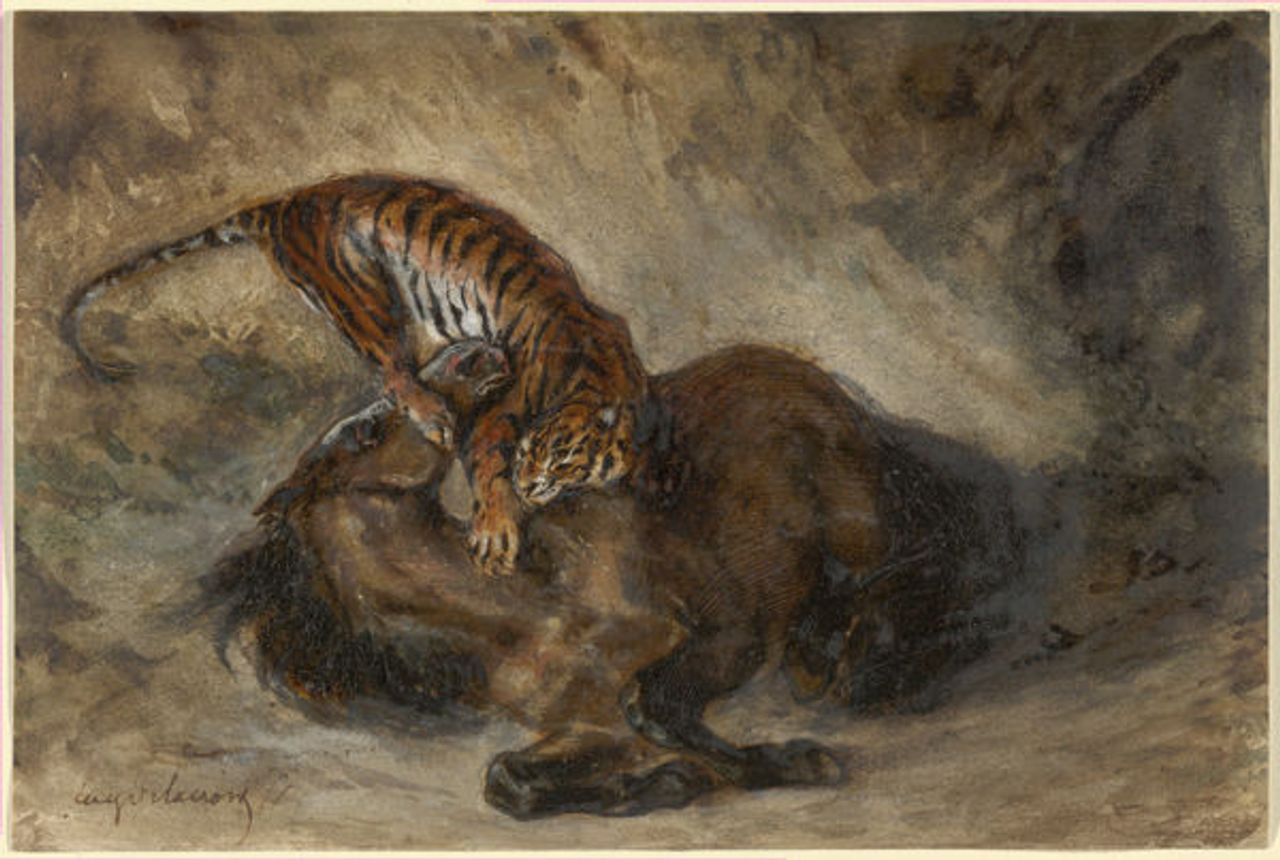 Delacroix’s studies and paintings of animals, particularly tigers which he observed at the Paris zoo, likewise served to explore the Romantic fascination with the exotic and awe-inspiring. More specifically, these images convey the intrinsic power of these wild beasts, dormant in their tamed or caged existence, but which might erupt into ferocious action at any time.

So too, the pitched battles of mounted horsemen—many of which were drawn from observing Moroccan military exercises like those pictured in Collision of Arab Horsemen (1833-34)—bore an obvious parallel, whether intentional or not, to the volatile class relations in the 1830s and 40s, which culminated in the Revolution of 1848.

The brilliant, dramatic dynamism of these works is further heightened by a fluid handling of form and atmospheric color that shows Delacroix’s affinity to the works of the English painters John Constable (1776–1837) and J. M. W. Turner (1775–1851), both of whom he had visited in 1825. The similarity, particularly to the latter, would become more pronounced in Delacroix’s later work and would be admired by the Impressionists and subsequent modern artists.

Finally, our understanding of Delacroix would not be complete without his journal, a selection from which was also included in the exhibit. As well-known in its own right as his paintings, the journal was written in 20 notebooks over two periods (1822–24 and 1849–63); unfortunately the notebook from 1848 seems to have been left in a cab.

The journal gives a vivid picture of the artist: as a young man he records his high artistic aspirations as well as notes on his friendships, trysts with models and scant financial resources. In his maturity, he emerges as a cultured man with a busy professional and social life in Parisian society and artistic circles that included Chopin and George Sand. In later years, as his strength and health declined, he was tender in his concern for his housekeeper and life-companion Jenny Le Guillou and sought to leave his work to posterity. His letters also make fascinating reading.

At all ages, he was uncompromising in his criticism of pomposity, superficiality and pretensions whether in politics or cultural life, and indefatigable in his dedication to art. For all that he was a Romantic, he maintained a concept of artistic truth, rooted in the Enlightenment, that resembled a philosophically materialist one:

“The fact of the matter is,… art is not what the vulgar believe it to be, a vague inspiration coming from nowhere, moving at random, and portraying merely the picturesque, external side of things. [Art] is pure reason, embellished by genius, but following a set course and bound by higher laws.” (Journal, 7 April 1849)