This 27 September 2018 video from the USA says about itself:

Anti-Trump activist Therese Patricia Okoumou chats with Jezebel about her protests against the Trump Administration.

A woman has been found guilty of several federal offenses after climbing onto the base of the Statue of Liberty on the Fourth of July this year to protest the Trump administration’s immigration policy, including the separation of families at the border and the jailing of migrant children.

Magistrate judge Gabriel Gorenstein convicted Therese Patricia Okoumou on Monday afternoon after a one-day bench trial, insisting that Okoumou’s political and moral motivations were not justifiable before the law.

Okoumou was found guilty of trumped-up

charges, including trespassing, interfering with government agency functions, and disorderly conduct, carrying a sentence of up to 18 months in prison.

At the beginning of her trial, Okoumou said the treatment of children at the US-Mexico border prompted her to make an aggressive statement by climbing the Statue of Liberty.

“I wanted to send a strong statement that children do not belong in cages”, she said.

After convicting Okoumou, however, Judge Gorenstein claimed that he would be undermining the rule of law if he did not find Okoumou guilty, despite her political reasoning. According to Gorenstein, it would violate his oath as a judge if he considered Okoumou’s motivations for her alleged crime.

During the trial, the prosecution focused entirely on the supposed illegality of Okoumou’s actions.

“She knew that what she was doing was wrong and illegal”, the prosecution said in its opening statement. “Whether one sympathizes with the defendant politically and morally is not at issue in this case.”

The prosecution applauded the judge’s verdict, claiming Okoumou’s protest to be a “dangerous stunt … that endangered herself and the NYPD and US Park Police officers who rescued and apprehended her.”

In a press conference, US Attorney General Geoffrey S. Berman said, “The act of climbing the base of the Statue of Liberty went well beyond peaceable protest, a right we certainly respect. It was a crime that put people at grave risk. We commend Judge Gorenstein’s decision to hold Therese Okoumou accountable for her dangerous and reckless conduct.”

Dear Mr Berman, Dr Mr Gorenstein: what about what Donald Trump did to Lady Liberty and to the values she stands for; as depicted in this New York Daily News cartoon? Do you hold him accountable? 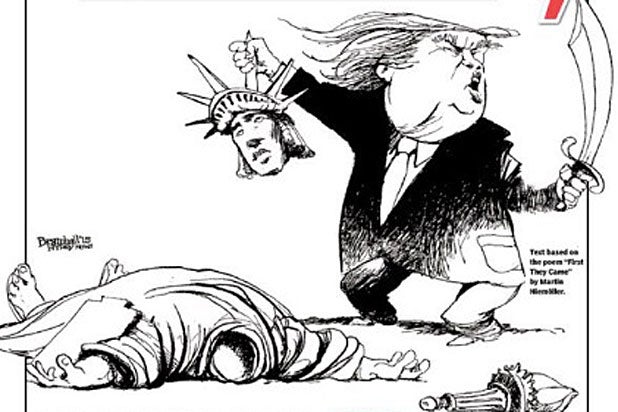 Judge Gorenstein’s assertion that the law must be upheld is ludicrous. The laws set and made within the United States are interpreted for the benefit of the capitalist order and the ruling class. Okoumou was indeed exercising her First Amendment right to protest the inhumane treatment of migrants, but this was seen as inexcusable by the US government.

It is no accident that Okoumou was found guilty shortly after the death of 7-year-old Jackeline Caal in the custody of US Border Patrol. Okoumou’s conviction is a message meant to intimidate anyone who opposes the terror practices meted out by the government against migrant workers and their families at the border and across the country.

Although the Trump administration reversed its policy of separating children from their parents upon crossing the border, it reportedly continues to do so by various means, and is also detaining children who have crossed the border unaccompanied. Nearly 15,000 migrant children are currently being held in detention camps across the US.

Okoumou told reporters she was not discouraged by the verdict and would continue to fight for the rights of immigrants.

“Migrant children who simply came to this country, like our ancestors did, to seek happiness, freedom and liberation, instead of welcoming them like Lady Liberty symbolizes, instead of treating them with kindness, what we showed them is cages. So, if I go in a cage with them, I am on the right side of history.”

Breaking: Patricia Okoumou was convicted today of all charges in federal court for climbing the Statue of Liberty on July 4 to protest the detention of immigrant children. Here she speaks to supporters outside the courthouse. She will be sentenced on March 5. @prisonculture pic.twitter.com/jaogAZJ0QI

4 thoughts on “Human rights activism on Statue of Liberty, criminal?”