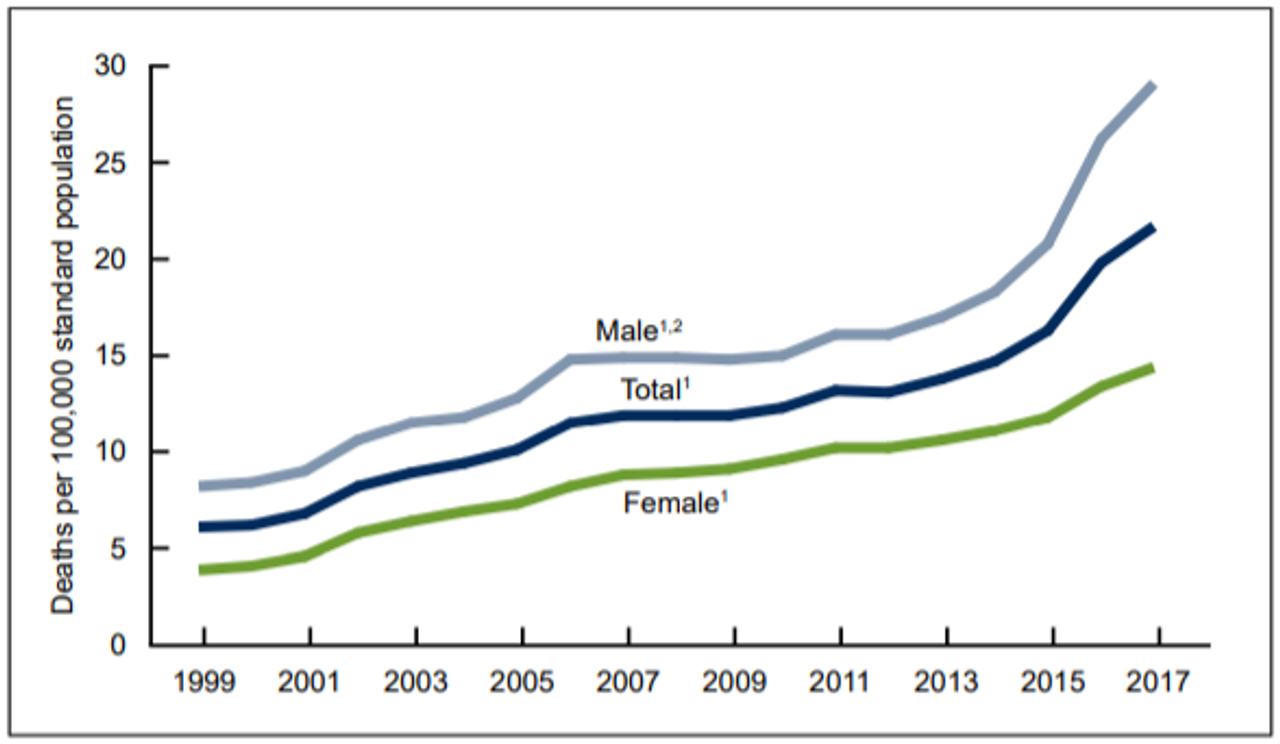 Life expectancy in the United States continued its extraordinary decline in 2017 after stagnating in 2016 and falling in 2015. Not since the combined impact of World War I and the Spanish Flu in 1918 has the country experienced such a prolonged period of decline in life expectancy.

The annual mortality report from the Centers for Disease Control (CDC) highlights the disastrous impact of the social crisis on the American working class. Suicides and drug overdoses, what have been termed deaths of despair, have been identified as the driving forces behind the continuing decline in how long Americans are expected to live.

In 2017, over 2.8 million Americans died, an increase by approximately 70,000 from the previous year and the most deaths in a single year since the US government began keeping records. From 2016 to 2017, the age-adjusted death rate for the entire population increased by 0.4 percent.

Age-specific death rates between 2016 and 2017 increased for age groups 25–34, 35–44, and 85 and over. These statistics indicate a healthcare system failing the elderly and a societal crisis ravaging younger workers. Deaths of despair, including alcoholism, are a leading cause of deaths in younger ages groups. 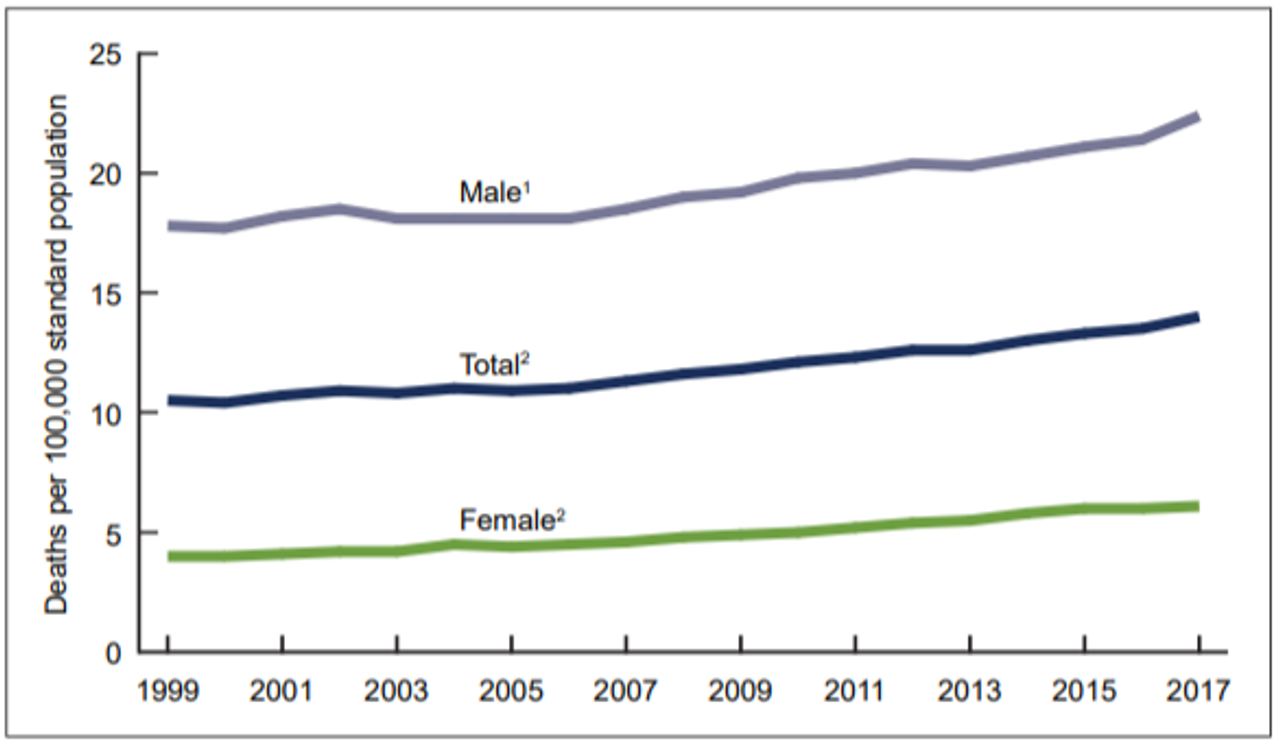 The figures contained in the latest CDC report are a reflection of the diseased nature of American society and the failure of the capitalist system. The last decade has seen a historic rise in social inequality in the aftermath of the economic crash of 2008 and the bailout of Wall Street, overseen by Obama and the Democrats, which saw the greatest transfer of wealth in history from the working class to the rich.

Low-wage, tenuous employment, where it is available, has replaced the jobs that were destroyed in the process. … 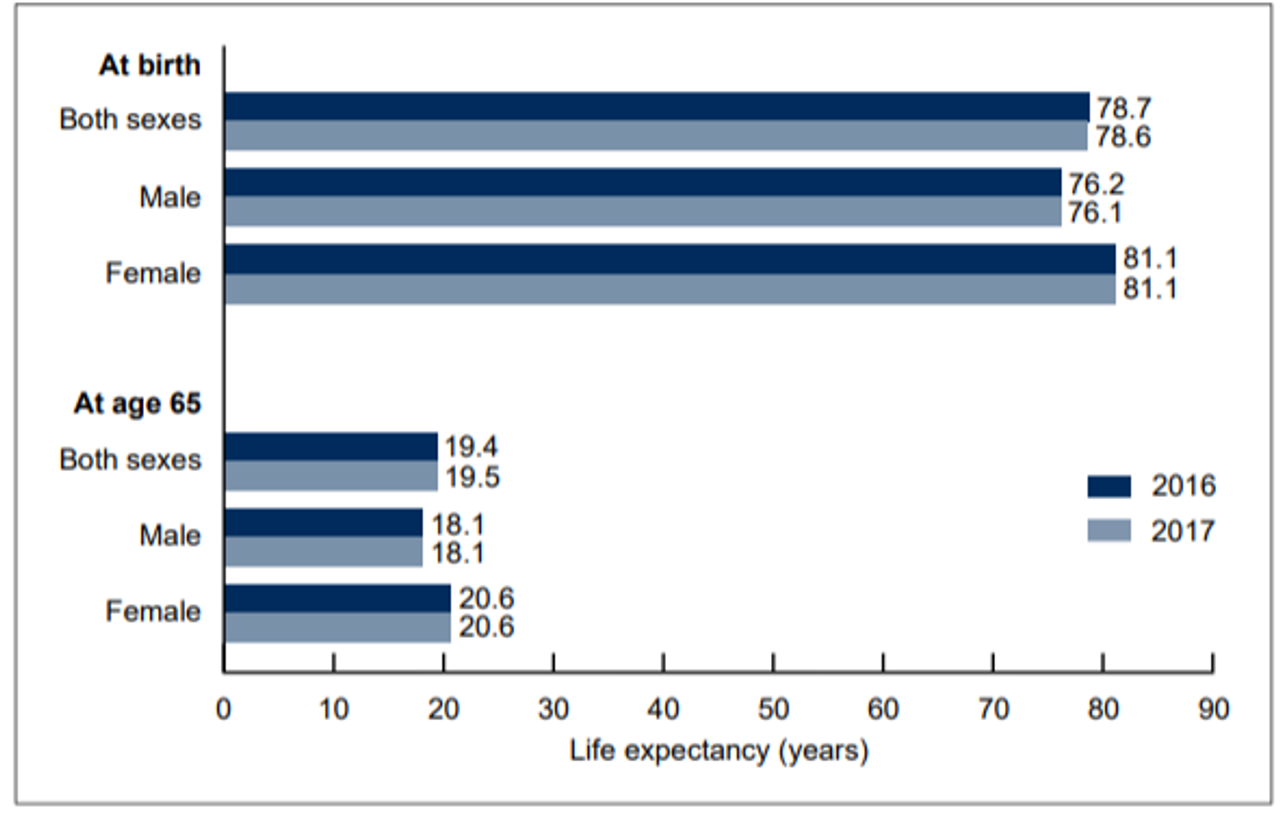 CDC director Robert R. Redfield lamented over the implications of his organization’s report: “The latest CDC data show that the US life expectancy has declined over the past few years. Tragically, this troubling trend is largely driven by deaths from drug overdose and suicide,” he said in a press release.

“Life expectancy gives us a snapshot of the Nation’s overall health and these sobering statistics are a wakeup call that we are losing too many Americans, too early and too often, to conditions that are preventable.”

As indicated by the prevalence of suicide in rural regions, joblessness and social isolation reap a terrible toll. Workers are driven to the very brink of despair under the ruling class assault against the living standards won by the working class in the 20th century.

There is no solution to the continued decline in life expectancy forthcoming from the ruling class. In reality, the increased death rates are seen as the cost of doing business, necessary to funnel ever greater sums of money into the pockets of robber barons like Jeff Bezos and fuel unprecedented spending on the US military.

A socialist response is required to meet the needs of the working class. A direct assault must be launched on the wealth of the corporate and financial elite. The wealth of the one percent must be expropriated to fund universal healthcare and turn the giant pharmaceutical companies into publicly-owned utilities.

The decades-long campaign to strip workers of their social gains must be reversed. Society must be transformed to ensure every person has access to high quality healthcare, education and housing, and ensure the right to a high-paying job and leisure.

One million dead from suicide, drug overdoses since 2007. Casualties of the social counterrevolution in America: here.

A study published this week in the Journal of the American Medical Association (JAMA) details the fall in life expectancy in the United States from 2015 to 2017, a streak unprecedented in modern times. Virginia Commonwealth University professor Dr. Steven H. Woolf and Eastern Virginia Medical School student Heidi Schoomaker analyzed life expectancy data for the years 1959-2016 and cause-specific mortality rates for 1999-2017. The data shows that the decline in life expectancy is not a statistical anomaly, but the outcome of a decades-long assault on the working class: here.

AS TRUMP PUSHES CUTS, NEW PAPER SHOWS BENEFIT OF FOOD ASSISTANCE People are a little less likely to die prematurely if they receive federal food assistance, according to a new study. The findings come amid rising numbers of “deaths of despair,” such as those from drug overdoses and suicide, and an overall decline in U.S. life expectancy. [HuffPost]

TUCKER BLAMES WOMEN FOR MALE ALCOHOL ABUSE Fox News host Tucker Carlson claimed in a segment about “men in decline” that there was “more drug and alcohol abuse” and “higher incarceration rates” in areas where women earn more money than their male counterparts. [HuffPost]

14 thoughts on “Life expectancy in the USA going down”