This BBC telecast represents the world premiere of the 1988 Scottish Opera version of Leonard Bernstein’s Candide, directed by Jonathan Miller and John Wells. Bernstein attends and John Mauceri conducts this most complete version of the score ever seen on the stage. Directed for the cameras by Humphrey Burton.

By Joanne Laurier in the USA:

Leonard Bernstein’s operetta Candide at the University of Michigan

Bernstein based his operetta on the famed 1759 novella by Voltaire, the French writer, historian and philosopher. The original Candide was an enormously influential Enlightenment work that satirized established religion, government and philosophy. It follows a naïve youth through a series of calamities, natural and man-made, that shakes the complacent, fatalistic optimism in which he has been instructed and, by implication, casts doubt on any divine plan for humanity. The satire, which was an immediate best-seller, was put on the list of prohibited books by the Catholic Church in 1762 and banned in various locales. 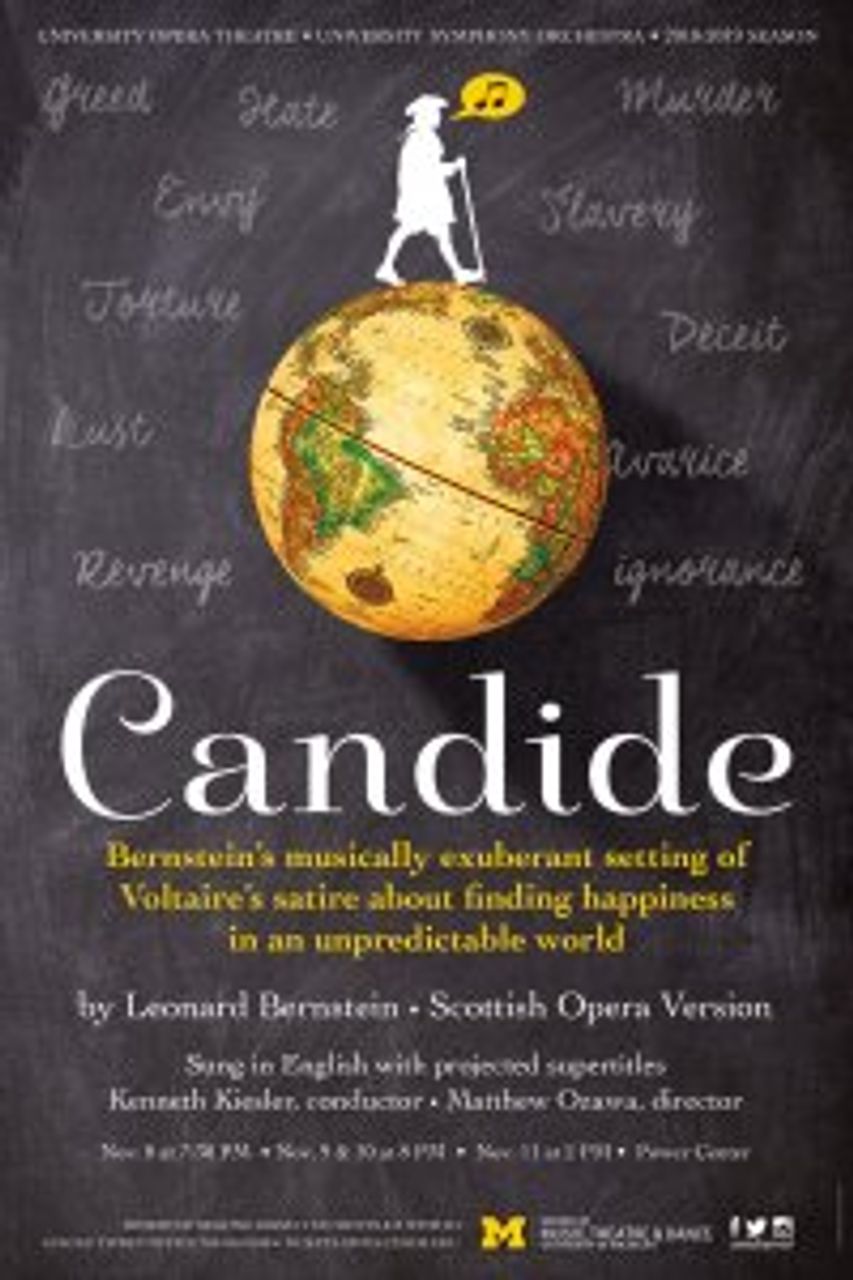 Bernstein hardly made a secret of the fact that one of the impulses for his operetta was provided by the McCarthyite witch hunts in the 1950s. The work was created in 1953 as a result of discussions between the composer and playwright Lillian Hellman. Both had been affected by the Red Scare. Bernstein was forced to sign a humiliating affidavit attesting to his anti-communism. Hellman, a onetime member and continuing supporter of the Communist Party, was blacklisted in the film industry, and her partner, author Dashiell Hammett, another party supporter, went to jail for refusing to provide the names of those who had contributed to a bail fund for Communist Party leaders prosecuted under the reactionary Smith Act.

Hellman adapted Voltaire’s work with lyricist John La Touche and Bernstein. LaTouche was later replaced by poet Richard Wilbur. In 1956, the year that Bernstein was simultaneously composing West Side Story, Candide was ready for performances in Boston, where Dorothy Parker contributed lyrics to “The Venice Gavotte” in Act 2. …

Candide’s complicated performance history involves numerous revisions in the 30 years since its premiere in 1956. Versions appeared in 1973, 1982 and 1989, and further posthumous revisions in 1993 and 1999—Bernstein died in 1990. UM presented the 1989 Scottish Opera Edition of the Opera-House Version.

Voltaire (Gillian Eaton) narrates the story set in idyllic Westphalia (a region in northwestern Germany), where the scholar Dr. Pangloss (Benton DeGroot) tutors his four students—Candide (Daniel McGrew), Cunegonde (Lucia Helgren), Maximilian (Fernando Grimaldo) and Paquette (Eileen Vanessa Rodriquez)—in “optimism”, where “all is for the best in the best of all possible worlds.”

Cunegonde, the beautiful daughter of a Baron, and Candide, a bastard cousin, fall in love. The Baron is not pleased and expels Candide, who eventually joins the Bulgar Army, currently engaged in “liberating” Westphalia. The Bulgars supposedly kill Cunegonde, after ravishing her, along with the rest of her family. Candide is left to wander through Europe. More disasters befall him. 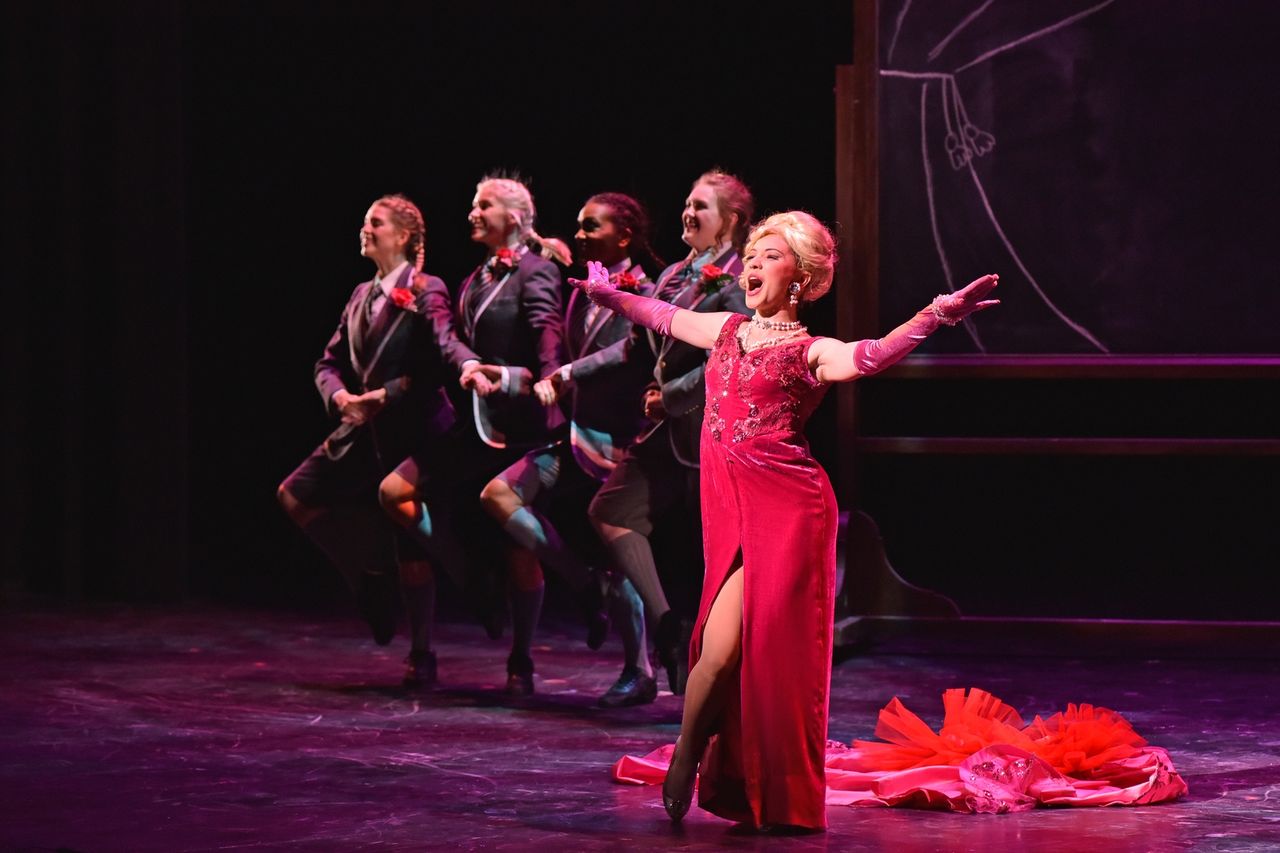 Candide at the University of Michigan

He happens to be in Lisbon when the famous … earthquake kills 30,000 people. Candide and Pangloss are blamed for the disaster and the latter is publicly hanged as a heretic in the Inquisition. Candide later finds himself in Paris and discovers that Cunegonde is not dead after all, simply earning her living as a courtesan. They eventually set off for the New World, South America, and further unhappy adventures.

Over the course of their wanderings throughout Europe and South America, Candide and Cunegonde are subjected to every sort of painful adversity: wars, shipwrecks, earthquakes, rapes, beatings and swindles. Their life lessons knock the stuffing out of Pangloss’s “optimism”.

Many of the lyrics are striking, such as when Pangloss sings: “Though war may seem a bloody curse, it is a blessing in reverse. When cannon roar, both rich and poor by danger are united.”

Narrator Voltaire derides the Catholic Church for torturing and killing its victims in an “Auto-da-Fé” (act of faith, or the burning of heretics and apostates), while a chorus sings:

What a day, what a day,
For an Auto da Fé!…
It’s a lovely day for drinking
And for watching people die!
What a perfect day to be a money lender!
Or a tradesman, or a merchant or a vendor!
At a good exciting lynching…
It’s a bonnie day for business,
Better raise the prices high!
For an Inquisition day this is a wonder!

“One final word in praise of the universal laws of Science,” says Pangloss. “God in his wisdom made it possible to invent the rope and what is the rope for but to create a noose?”

The University of Michigan production was a serious effort, remarkably well organized and executed. Conductor Kenneth Kiesler and director Matthew Ozawa are prominent artists. Kiesler has conducted orchestras and opera companies on five continents, while Ozawa has directed opera throughout the US and elsewhere.

The student singers and musicians delivered taut, elegant and committed performances. The entire ensemble was top-notch, with the four leads—Helgren as Cunegonde, McGrew as Candide, Grimaldo as Maximilian and Rodriquez as Paquette—vivacious and entertaining. The energetic Samantha Rose Williams as the Old Lady also deserves special mention.

The sets were imaginatively minimalistic and inventive, as cast and crew used numerous blackboards, ranging from the gigantic to the hand-held, to create backdrops and props.

As noted above, Bernstein always pointed to the anti-communist purges of the 1940s and 1950s as one of the impulses for his operetta. According to the official Leonard Bernstein website, the operetta’s creators saw a “parallel between the Inquisition’s church-sponsored purges and the ‘Washington Witch Trials’, fueled by anti-Communist hysteria and waged by the House Un-American Activities Committee.”

In 1989, between the acts of a concert performance of the work in London, Bernstein remarked: “Why Candide? Whither and whence Candide?… The particular evil which impelled Lillian Hellman to choose Candide and present it to me as the basis for a musical stage work was what we now quaintly and, alas, faintly recall as McCarthyism—an ‘ism’ so akin to that Spanish inquisition we just revisited in the first act as to curdle the blood. This was a period in the early ‘50s of our own century, exactly 200 years after the Lisbon affair [massive earthquake], when everything that America stood for seemed to be on the verge of being ground under the heel of that Junior Senator from Wisconsin, Joseph McCarthy, and his inquisitorial henchmen. That was the time of the Hollywood Blacklist—television censorship, lost jobs, suicides, expatriation and the denial of passports to anyone even suspected of having once known a suspected Communist.

With Candide, Bernstein was attempting to create a popular American musical satire. Undoubtedly, one of his inspirations or models, in the general sense, was The Threepenny Opera (1928) by Bertolt Brecht-Kurt Weill. Bernstein had conducted a concert performance of the “play with music”—also a bitter satire and based on an 18th century work—in 1952 at a music festival before an audience of nearly 5,000 people. That performance, featuring Lotte Lenya (Weill’s wife), is considered the “warm-up” for The Threepenny Opera’s enormously successful run off-Broadway in 1954 and then from 1955-1961. Lenya once asserted, “I think surely Leonard Bernstein knows every note of Kurt Weill … and he is the one who took up after Weill’s death … I think [he] is the closest to Kurt Weill.”

However, Candide does not succeed in eviscerating the American social order as the earlier work had done to its German equivalent. The issue here is not the presence or absence of artistic genius, with which Bernstein was blessed in full measure, but primarily the different times and the consequences of the political defeats suffered by socialism and the working class in the middle of the century.

The lesson Bernstein seems to have drawn from the McCarthy period was a slightly cynical and discouraged one—to roll with the punches, so to speak. He didn’t submit the anti-communist affidavit out of pure careerism, as others did in relation to HUAC, but he certainly didn’t see or understand that it was necessary to resist. Or, more precisely, his outlook was one of encouraging a militant liberalism as the answer to reaction. And this is what led more or less directly to Candide’s “softness” or obliqueness.

Despite Bernstein’s intriguing and entertaining comments, it could hardly be said that the operetta, for example, fully takes on McCarthyism and political reaction in America. The less historically informed spectator today might be forgiven if he or she even failed to make that connection. Blind optimism in the face of the tragedies that actually occur to people—including the traumas of the 20th century—seems more its message. Candide is simply not that cutting, and its conclusion, as the UM production—in its weakest aspect—demonstrates, can be interpreted in a relatively conformist and complacent fashion.

In the program, director Ozawa states: “Making my UM directorial debut with Bernstein’s wildly exuberant operetta has been a treat … What better way to bring our communities together than on a show that celebrates diversity, humanity, and our ability to cultivate a collective ‘garden.’”

This is not an appropriate reading of the situation of Voltaire’s characters, or Bernstein’s to a large extent, who are beaten down and more resigned, in the end, than “exuberant” about their prospects for the future.

In the novella, in its concluding passage, Pangloss, addressing Candide, continues his dreadful sophistic apologetics for things as they are: “There is a concatenation of events in this best of all possible worlds: for if you had not been kicked out of a magnificent castle for love of Miss Cunegonde: if you had not been put into the Inquisition: if you had not walked over America: if you had not stabbed the Baron: if you had not lost all your sheep from the fine country of El Dorado: you would not be here eating preserved citrons and pistachio-nuts.”

“All that is very well,” answered Candide, “but let us cultivate our garden.”

According to the Bernstein website, “Candide is perhaps destined never to find its perfect form and function; in the final analysis, however, that may prove philosophically appropriate.” The “highly checkered career of this work”, in Bernstein’s words, and its never really having found its “perfect form and function,” had a great deal to do with the political difficulties of the period and the composer’s own response to them.

Despite these weaknesses, the idea of adapting Voltaire was a good one, and UM’s production is a valuable effort marking the centenary of Bernstein’s birth.