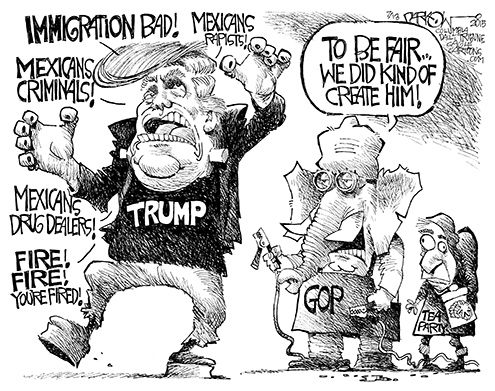 Donald Trump has taken a more direct approach when dealing with protesters during rally speeches in the past, on one occasion branding a man overweight and on another calling for a man to have his coat confiscated in freezing weather.

But the outspoken billionaire ramped up his rhetoric on Monday when he calmly told a Las Vagas rally he would like to punch a “disruptive” man in the face as he was escorted out by security.

Speaking ahead of the Nevada caucus, he told the crowd: “You know what I hate? There’s a guy totally disruptive, throwing punches, we’re not allowed to punch back anymore. I love the old days. You know what they used to do with guys like that when they were in a place like this? They’d be carried out on a stretcher, folks.”

“I’d like to punch him in the face, I tell you that,” he added, prompting cheers from the audience.

Reporters didn’t see why the man was taken out by security, and it was unclear whether he had actually thrown any punches.