This is a blue banded bee photo. Ivan Cheah of Kuala Lumpur in Malaysia made these bee photos. He was so kind to send them to Lizia in The Hague, the Netherlands, accompanied by notes:

Ivan Cheah wrote: “This bee is visiting this Lantana almost everyday. Guess this bee starting to recognise me… not so elusive anymore… allowing me to take a few shots of it. Not easy to take picture of this bee. Only those who tried or captured the picture of this bee will understand this.”

Lizia wrote: “It is the ‘Amegilla cingulata.’

Ivan Cheah wrote: “ Yes… precisely this is the same bee. This one from Wikipedia the blue color is not so significant, as bright and luminous as in my picture. 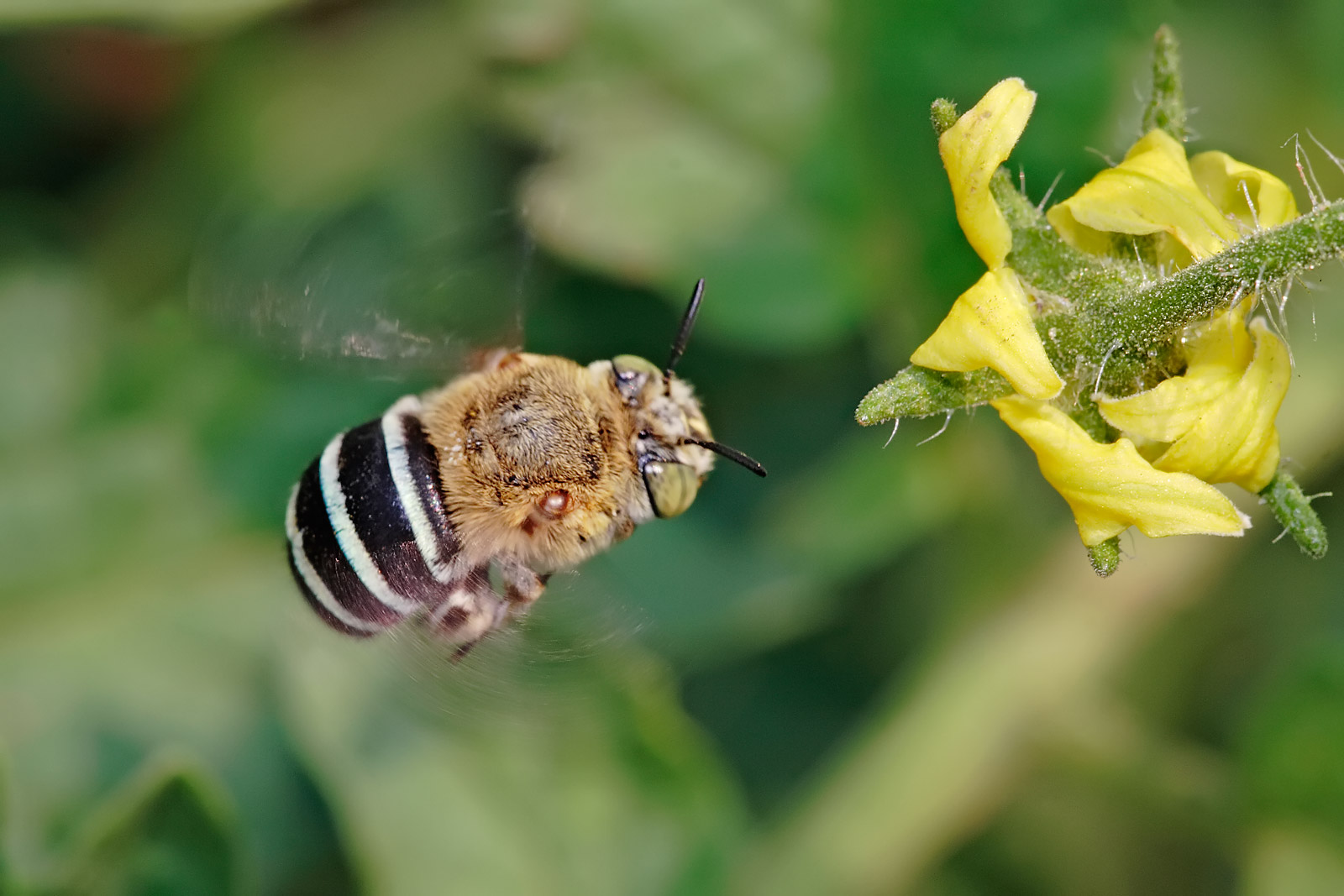 I think that one must be a female.

Yup… this species is common in Australia… I think cross continental took place that’s why this species is also available in Malaysia. One thing I don’t understand is why this bee is always lone ranger… the most I saw before is only two of it at the same place.

Lizia: “It is a wild and solitary bee. You’ll find the nest of this lady if you have time to follow her.”

Lizia: “She must work hard, she can’t rely on others as she is solitary.” [ . . ]. “ Your ‘blue banded bee’ is very important for the cultivation of tomato-like plants (Solanaceae). Our domestic honey bee doesn’t like tomato or lantana flowers. The wild bees are important for the pollination of such flowers.”

Project Noah says: “The bees use a process that involves clinging onto flowers and vibrating powerfully, which causes the food source to shoot out.”

Project Noah says: ”Amegilla cingulata builds a solitary nest, but often close to one another.”

Dave’s Garden: “During fall, blue banded bee adults all die as temperatures cool within their nests. Before they die however, the female bees lay eggs within the nests which become immature bees called prepupae. They remain dormant, burrowed in the nest inside cell sacs throughout the winter months and do not emerge until spring brings warmer weather. Then they finish their development into adults and emerge into the warmth of spring and begin a new season of life [5].’” Read more here.

Lazy Lizard Tales: “Blue-banded bee (Amegilla sp.), Chestnut Avenue: “These bees pose virtually no threat to people. A sting from these bees feels like a mere pinprick and is extremely unlikely anyway. A neatly kept garden and well-maintained walls and brickwork will discourage them from nesting where people may contact them. It should be noted, however, that they should indeed be encouraged in gardens.” It’s important to recognise that among the many species of bees and wasps present in Singapore, only a select few pose any potential serious danger to people, and usually only in situations when a nest has been disturbed. Even when hornet or honeybee nests have been detected, simply avoiding the immediate vicinity is typically enough to avoid provoking a defensive response.“ http://lazy-lizard-tales.blogspot.nl/2013/12/beehive-hangs-from-woodlands-bus-stop.html (another Ivan)

Research has for the first time revealed the heavy metal secret behind an Australian bee’s unique approach to pollination: high-speed headbanging. In an effort that would put metal fans to shame, the native blue-banded bee has been filmed head banging flowers up to 350 times a second. The technique causes vibrations that release pollen into the air similar to the motion of a salt and pepper shaker, helping pollinate the flower: here.