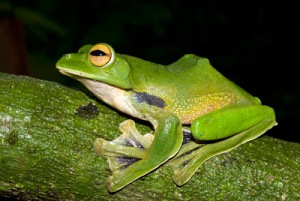 January 2013. A new species of flying frog has been discovered in Vietnam by Australian Museum amphibian biologist, Dr Jodi Rowley and her Vietnamese colleagues. Dr Rowley was stunned to discover the large, 10cm long species surprisingly close to Ho Chi Minh City, an urban centre with over 9 million people.

The new species – known as Helen’s Tree Frog (Rhacophorus helenae) – is bright green with a white belly and has webbed hands and feet like parachutes to glide from tree to tree. Dr Rowley said it was incredibly rare and very exciting to find a new species of frog less than 100km from one of the largest cities in South East Asia.

“To discover a previously unknown species of frog, I typically have to climb rugged mountains, scale waterfalls and push my way through dense and prickly rainforest vegetation,” she said.

“I certainly didn’t expect to find a new species of frog sitting on a fallen tree in lowland forest criss-crossed by a network of paths made by people and water buffalo, and completely surrounded by a sea of rice-paddies.”

Dr Rowley said the large frog has likely evaded biologists until now by spending most of its time out of sight, in the canopy of large trees.

Dr Rowley said she chose to name the frog species in honour of her mother, Helen Rowley, who has steadfastly supported her only child trekking through the forests of Southeast Asia in search of frogs.

“My mother was recently diagnosed with ovarian cancer and I thought it was about time that I showed her how much I appreciate everything she’s done for me and everything that she’s put up with over the years,” she said.

Only known from 2 small patches of lowland forest

To date, Helen’s Tree Frog is only known from two patches of lowland forest in the middle of agricultural land not far from Ho Chi Minh City.

Dr Rowley said lowland forests are among the most threatened habitats in the world.

“Another, more well-known species reliant on lowland forests, the Javan Rhino, was confirmed extinct in Vietnam in October 2011,” she said.

“The new species is at great risk due to ongoing habitat loss and degradation – the greatest threat to amphibians throughout Southeast Asia – but hopefully it has been discovered just in time to help protect it.”