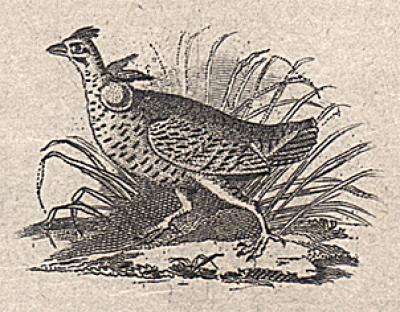 (July 29, 2010) — In 1824, three years before he began to publish his famous “double elephant folio” The Birds of America, John James Audubon (1785-1851), the eminent artist of American birds and animals, created a drawing of a running grouse for use in the design for a New Jersey bank note. Although the artist mentions the drawing and the resulting engraved paper money in two separate diary entries, no one has ever been able to locate or identify such an illustration.

Now, after a decade-long search by an Audubon scholar from Philadelphia’s Academy of Natural Sciences and a numismatic historian from St. Louis, Audubon’s first published illustration of a bird has been discovered.

In a forthcoming article in the Journal of the Early Republic, Robert M. Peck, curator of art and artifacts and senior fellow at the Academy of Natural Sciences, and the article’s lead author, and Eric Newman, an authority on American money, reveal their discovery and explain how Audubon’s fledgling entry into the visual world of commerce took place. The find is important not only for solving the puzzle of the missing engraving, but also because it illustrates Audubon’s development as an artist of American subjects. It also provides a rare, contemporary view of the Heath Hen, a subspecies of running grouse that has become extinct since Audubon portrayed the bird in the early 19th century.

The search for the missing engraving

In 1955, Audubon biographer Alice Ford began a decade-long search for the lost engraving in both the U.S. and Great Britain, but without success. In 1960, William H. Dillistin, president of the Federal Reserve Bank of New York and a noted numismatic scholar, made his own systematic search for the Audubon bank note. Dillistin was no more successful than Ford.

Several of Audubon’s more recent biographers also have searched in vain for the bank note Audubon mentioned. Unable to find the evidence of Audubon’s claim, some scholars have dismissed it as a red herring, invented by Audubon (a frequent embellisher of his own achievements) to burnish his reputation in the lean years before publishing his landmark book, The Birds of America (1827-1838).

Now, research by Peck and Newman on the 19th-century American banking and engraving companies that furnished paper money at the time confirm the reliability of the artist’s assertion and explain how forces beyond his control denied Audubon the numismatic immortality he craved.

By tracing the graphic offerings of the bank note engraver Gideon Fairman (1774-1827), to whom Audubon gave his drawing of a Heath Hen (a subspecies of the Pinnated Grouse or Greater Prairie Chicken), the authors successfully identified the lost Audubon image and provided two possible explanations for the elusiveness of Audubon’s first published bird illustration. The ill-fated Audubon grouse image, which the authors found on engraved bank note sample sheets in a private collection, did eventually make its way onto proof bank notes made for at least two independent banks. But because these banks were in Connecticut and Ohio and were made years after the artist’s initial contact with Fairman, they were not detected as being by Audubon, until now.

The full account of the engraving and its place in Audubon’s celebrated works will appear in the fall issue of the Journal of the Early Republic, the journal of the Society for Historians of the Early American Republic, published by Penn Press. The society is housed at the Library Company of Philadelphia.

Audubon’s Birds of America book up for sale – most valuable book in history? Here.

A copy of John James Audubon’s Birds of America has became the most expensive book ever sold when it went under the hammer at Sotheby’s for a staggering US$11,542,683 (£7,321,250). The auction was a rare chance to own one of the best preserved editions of the 19th century masterpiece, with its 435 hand-coloured illustrations, seen as a key volume on US natural history: here.