This 2017 Dutch Dordrechts Museum video is about an exhibition of Aert Schouman’s (1710-1792) bird paintings.

On 24 June 2017, I went to that exhibition in Dordrecht of work by Aert Schouman. Schouman was born in, and worked in Dordrecht for much of his life. Seventeenth century Dutch D’Hondecoeter was an inspiration for Schouman’s art on birds.

Among his works are big oil paintings for the walls of Prince William V‘s palace in The Hague. Schouman did that work in 1788, when he was already 78 years old. Four years later, he died. Three more years later, in 1795, Prince William V fled from invading French revolutionary soldiers to England.

Now, these Schouman paintings are usually in Huis ten Bosch royal palace in The Hague. However, that palace is being reconstructed (which costs lots of taxpayers’ money). So, from now till September 2017, there is an opportunity to see them at an exhibition of Schouman’s work in the Dordrechts Museum in Dordrecht.

Biologists have helped with this exhibition as the birds depicted are from many countries and Schouman often did not know exactly which species he painted. He depicted the birds as he saw them in the aviaries of Prince William V and other rich people. Not in their natural environment, as later painters like John James Audubon would do. Schouman often depicted birds from different continents, which would never meet in the wild, together in the same tree in the same painting. Also, eg, Asian golden pheasants meeting European black grouse.

Schouman depicted not just birds. He was an all-round artist, also painting portraits, landscapes, mammals and more. He decorated fans and drinking glasses.

This is a 2015 Dordrechts Museum video about various sides of Schouman’s art.

In 1734, Schouman made his first depiction of birds, in a watercolour. He lived at a time when science about birds and other animals was progressing, with Linnaeus’ classification of the natural world, and Buffon‘s first steps toward an evolution theory. However, Schouman still depicted flying birds of paradise without feet, because of the misunderstanding then caused by exporting them feetless to Europe from distant hardly known New Guinea. In New Guinea, birds of paradise were used in headdresses, for which the feet were useless. For export, the feet were cut off as well. Though a century before Schouman, Jan Brueghel in a painting made jointly with Rubens, had already depicted a bird of paradise with feet; contrary to most seventeenth century artists and scientists. Later, Schouman’s contemporary Linnaeus still called a bird of paradise species Paradisea apoda, “footless paradise bird.” Nevertheless, in 1758 Schouman depicted a sitting bird of that species with feet.

Schouman was not consistent on birds of paradise. In the top left painting in this picture, a feetless bird of paradise flies over an Asian silver pheasant and a South American cock-of-the-rock.

Only in the 19th century a European would see a, non-feetless, bird of paradise in the wild for the first time.

As we traveled to Dordrecht, we saw white storks from the train in meadows near Voorschoten.

Along the garden path to the museum entrance, cardboard cutouts of birds: a blue tit, a house sparrow, a toucan, a pelican. On the lawn, a living blackbird. 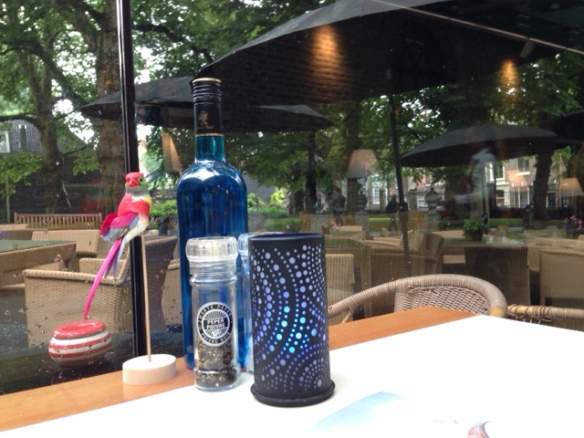 Bird figurines on the museum restaurant tables. Like all photos in this blog post, this is a cellphone photo. 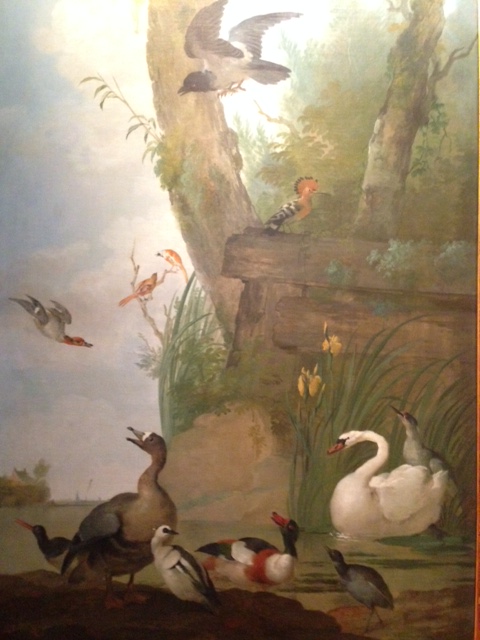 One of the first paintings near the entrance of the exhibition shows birds native to the Netherlands, at least in the eighteenth century. At the top of this work, a hooded crow (by now rare in the Netherlands; only in winter) flies. Below it, a hoopoe (no longer a breeding bird in the Netherlands).

Still further down, a male teal flying; and a bearded reedling couple sitting. Below, from left to right: an oystercatcher, a white-fronted goose, a smew, a shelduck, a moorhen and a mute swan. 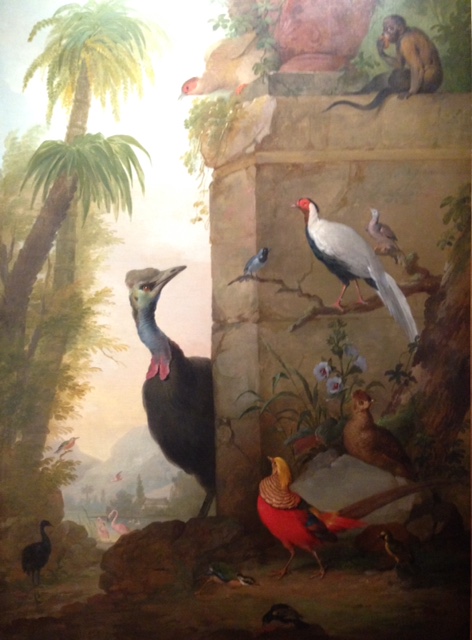 Next to it hung a painting of exotic birds, including southern cassowary, golden pheasant and silver pheasant. Also, a brown capuchin monkey. 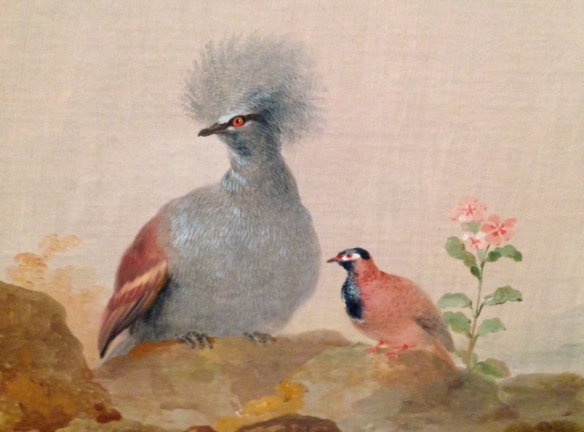 A bit further, this crowned pigeon, one of the world’s biggest pigeons, next to a smaller relative.

Here, another picture of the same southern crowned pigeon species. 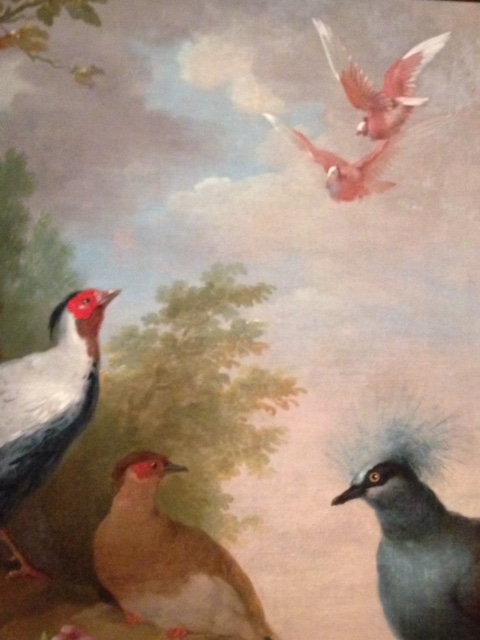 And here, that same crowned pigeon with its context of a silver pheasant couple and flying parrots. 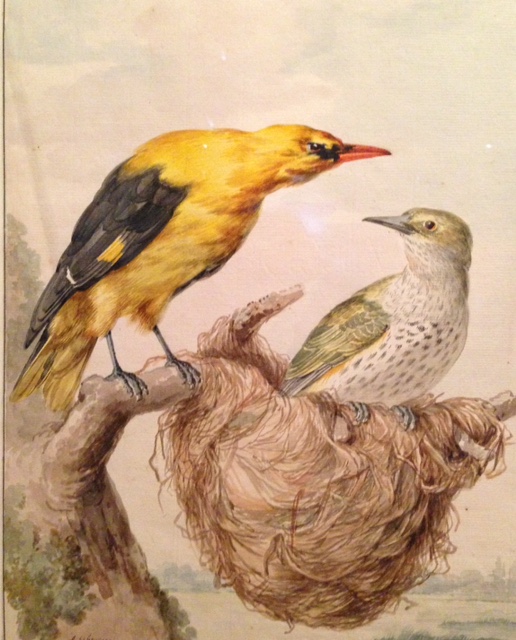 Next, an adult male golden oriole with its youngster in the nest.

There will be more on this blog about the Schouman exhibition. So, stay tuned!

UPDATE: over 60,000 people visited this exhibition.