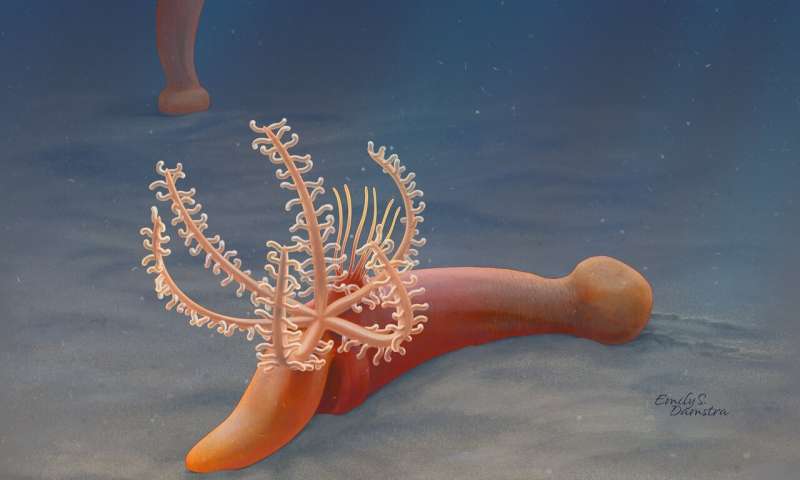 From the Royal Ontario Museum in Canada:

New research undertaken by scientists at the Smithsonian National Museum of Natural History, Royal Ontario Museum (ROM) and University of Montreal, has uncovered fossils of a new species of marine animal, Gyaltsenglossus senis, (pronounced Gen-zay-gloss-us senis) that provides new evidence in the historical debate among zoologists: how the anatomies of the two main types of an animal group called the hemichordates are related. The fossils are over half-a-billion years old and were discovered at a Burgess Shale site in the Canadian Rockies. This discovery was published August 27, 2020, in the science journal Current Biology.

With the early evolution of hemichordates being contentious among researchers the discovery of Gyaltsenglossus senis is significant. It provides direct fossil evidence connecting the two major groups of hemichordates: the enteropneusta and pterobranchia.

Although enteropneusts and pterobranchs appear to be quite different types of animals they are closely related. This close relationship is supported by DNA analysis of present-day species. More broadly, the role of Gyaltsenglossus in understanding hemichordate evolution helps us understand the origins of a larger group of animals called deuterostomes (which includes humans) by clarifying what characteristics they may have shared with hemichordates early in their history.

The enteropneusta are a group of animals known commonly as acorn worms, which are long, mostly mud-burrowing animals, that can be found today in oceans around the world from the tropics to Antarctic. The other main group of animals within hemichordates are pterobranchs, which are microscopic animals that live in colonies, each protected by tubes they construct and which feed on plankton using a crown of tentacled arms.

“Acorn worms and pterobranchs look so different from each other that understanding the origins of their evolutionary relationship has been a major historical question in zoology,” said Dr. Karma Nanglu, Peter Buck Deep Time post-doctoral fellow at the Smithsonian National Museum of Natural History and lead author on this paper. “Answering this question has been made much harder by the extreme lack of fossils of these soft-bodied hemichordates. Throughout the half-billion-year-long history of hemichordates you can count on one hand the number of exceptional preserved fossil species.”

Despite being just two centimeters in length, the remarkably preserved soft tissues of the Gyaltsenglossus fossils reveal incredibly detailed anatomical structures. These details include the oval-shaped proboscis of acorn worms and a basket of feeding tentacles similar to those of pterobranchs. The age of these fossils, combined with the unique morphological combination of the two major hemichordate groups, makes this discovery a critical find for understanding early hemichordate evolution.

“An ancient animal with an intermediary anatomy between acorn worms and pterobranchs had been hypothesized before but this new animal is the clearest view of what the ancestral hemichordate may have looked like,” says Dr. Christopher Cameron, Associate Professor at the University of Montreal and a co-author on this study. “It’s exciting to have so many new anatomical details to help drive new hypotheses about hemichordate evolution.”

In the case of Gyaltsenglossus, the exceptional preservation of these fine details can be attributed to the unique environmental conditions of the Burgess Shale, which rapidly entombed ancient animals in underwater mudslides. Through a combination of factors, including slowing the rate of bacteria decaying the entombed animals’ bodies, the fossils of the Burgess Shale are preserved with far greater fidelity than typical fossil sites.

“The Burgess Shale has been pivotal in understanding early animal evolution since its discovery over 100 years ago,” says co-author Dr. Jean-Bernard Caron, Richard M. Ivey Curator of Invertebrate Palaeontology at the ROM and Associate Professor at the University of Toronto. Dr. Caron led the field expedition in 2010 which collected the 33 fossils of Gyaltsenglossus.

“In most localities, you would be lucky to have the hardest parts of animals, like bones and teeth, preserved, but at the Burgess Shale even the softest body parts can be fossilized in exquisite detail,” says Dr. Caron. “This new species underscores the importance of making new fossil discoveries to shine light on the most stubborn evolutionary mysteries.”

In this particular case, Gyaltsenglossus suggests that the ancestral hemichordate may have been able to use the feeding strategies of both of the modern groups. Like acorn worms, the long proboscis may have been used to feed on nutrient-filled marine mud, while at the same time, and like the pterobranchs, the array of six feeding arms was probably used to grab suspended food particles directly from the water above where it was crawling.

Hemichordates belong to a major division of animal life called Deuterostomia, which includes chordates like fish and mammals, and not the division of animal life called Protostomia, that includes arthropods such as insects and annelids such as earthworms. Dr. Nanglu explains, when looking at Gyaltsenglossus, we’re actually looking at a very, very distant relative of our own branch of vertebrate and human evolution.

“The close relationship between hemichordates and our own evolutionary group, the chordates, is one of the first things that made me excited to research them,” Nanglu explains. “Understanding the ancient connections that join animals like fish and even humans to their distant cousins like sea urchins and acorn worms is such an interesting area on the evolutionary tree and Gyaltsenglossus helps bring that link into focus a little bit more clearly.”

The original 1909 discovery and research about the Burgess Shale was made by Charles Walcott, who was Secretary of the Smithsonian Institution at the time. The Burgess Shale fossil sites are located within Yoho and Kootenay National Parks and are managed by Parks Canada.