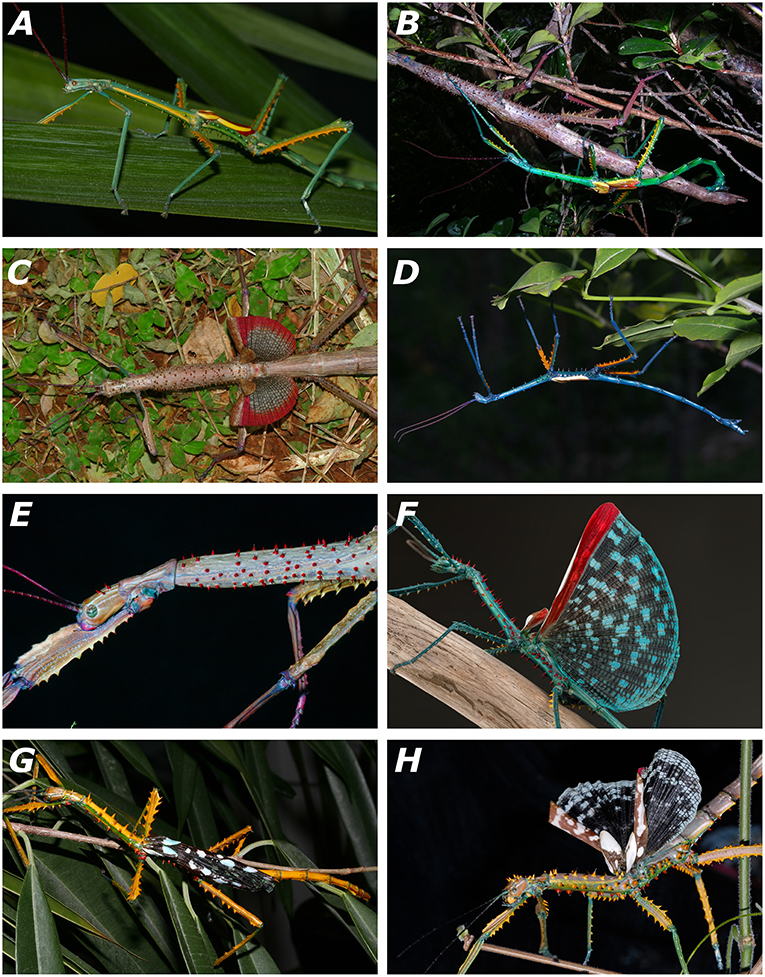 From Frontiers in Ecology and Evolution:

Love Island: Flamboyant males get the girls on Madagascar

In two new species of rare giant stick insects, males turn livid blue or multicolored at sexual maturity — but why?

Summary: Scientists have discovered two new species of giant stick insect on Madagascar, whose males become dazzling blue or multicolored at sexual maturity. The researchers describe their rare and exciting findings, and wonder at the reproductive success of the least stick-like stick insects on the planet.

Biodiversity hotspot Madagascar is one of the world’s biggest islands, and home to some of its biggest insects. Now German scientists have discovered two new species of giant stick insect, living only in the dry forests of Madagascar’s northernmost tip.

One giant female measures a whopping 24cm — but it is the smaller males that are most striking. At sexual maturity these daredevils abandon their stick-like camouflage for dazzling blue or many-colored shining armor.

Writing in Frontiers in Ecology and Evolution, the researchers describe their rare and exciting findings, and wonder at the reproductive success of the least stick-like stick insects on the planet.

“Nearly all of the 3000+ known species of stick insects try to be inconspicuous and just look like twigs,” says senior author Dr. Sven Bradler of the University of Göttingen, Germany. “There are a very few, very large exceptions — and we have just discovered a couple more of them.”

“These were similar in size — 15 to 24cm — but generally less spiny and a bit differently colored than typical examples of their kind,” explains Bradler. “Now genetic tests confirm that the quirky individuals are in fact two new species, distinct from the original two but part of the same group.” explains Bradler.

Bradler’s reclassification places members of this group of species as close evolutionary relatives to other Madagascan stick insects, rather than cousins from overseas as previously thought. This is a potentially major finding, as it challenges the prevailing view that sticks insects colonized Madagascar multiple times.

He who dares, wins

The discovery also prompted the researchers to wonder: what reproductive advantage do these males gain from their bright colors, that is worth exposing themselves to predators?

The first author Dr. Frank Glaw of the Bavarian State Collection of Zoology in Munich, and colleagues bred the new giant stick insect species in captivity to observe their behavior.

“Males of one species started mating attempts only when they achieved their bright blue color.”

“Males searching for a mate have to move about more, so pretending to be a stick becomes tricky. Better perhaps to plump for the opposite: a brightly colored warning.”

“In support of this, all stick insects have neck glands that [produce] repellant substances, and these are typically well-developed in brightly colored species. Alternatively, like the Madagascan frogs some giant stick insects may have developed the ability to accumulate toxins from their food.”

But testing these hypotheses will be tough, admits Glaw.

Bradler adds “More than one factor may have played a role in the evolution of this remarkably conspicuous coloration. So even with more data on mate selection, habits, predators, natural food plants, toxins produced by defense glands and possible accumulation of toxins among giant stick insects, finding evidence for these ideas may prove difficult.”

Whatever its function, the splendid coloring of the male giant stick insects could make them a strong flagship species to promote the unique biodiversity of Madagascar, and the need for its protection.

“Already the once-uncertain future of these two new species seems secured, with their forest habitat in northern Madagascar a hotspot for conservation priorities”, says Glaw. “It is vital to maintain awareness and motivation to keep logging at bay. This precious area also harbors the highest density of critically endangered reptiles in Madagascar and is home of one of the most threatened primate species in the world, the lemur Lepilemur septentrionalis.”