By Brian Dixon in the USA:

A number of previous studies have established a link between drug company payments (even as small as purchasing a lunch) and doctor prescribing behavior. Some prior research has examined the marketing of opioid products and mortality rates.

The JAMA Network Open study, however, is the first to link mortality rates with the total marketing of opioid products based on US county-level data, although the researchers are careful to note that they have only established an association, not causation.

The study notes that while it is possible that drug companies simply targeted areas for marketing that already had high rates of overdose mortality, the tens of millions of dollars invested by drug companies in direct-to-physician marketing makes it “improbable that companies would provide payments to physicians if such marketing did not either increase prescribing rates or maintain high levels of opioid prescribing.”

Moreover, the study notes that recent attempts to address this issue by placing a dollar cap on the amount that doctors can receive is unlikely to make a difference because even small payments can impact prescribing behavior.

“What seems to matter most wasn’t the amount of money doctors were paid, it was the number of times they were paid,” Magdelena Cerdá, the director of the Center for Opioid Epidemiology and Policy at the New York University School of Medicine, told the Washington Post.

The publication of the study comes amid recent reports highlighting the devastating impact of the opioid epidemic in the United States.

Last week the nonprofit National Safety Council issued a study that found for the first time that individuals are now more likely to die from an accidental opioid overdose than in a motor vehicle crash. The odds of accidentally dying from an opioid overdose are 1 in 96, exceeding the odds for dying in a car accident (1 in 103), dying from an accidental fall (1 in 114), gun assaults (1 in 285) or drowning (1 in 1,117). 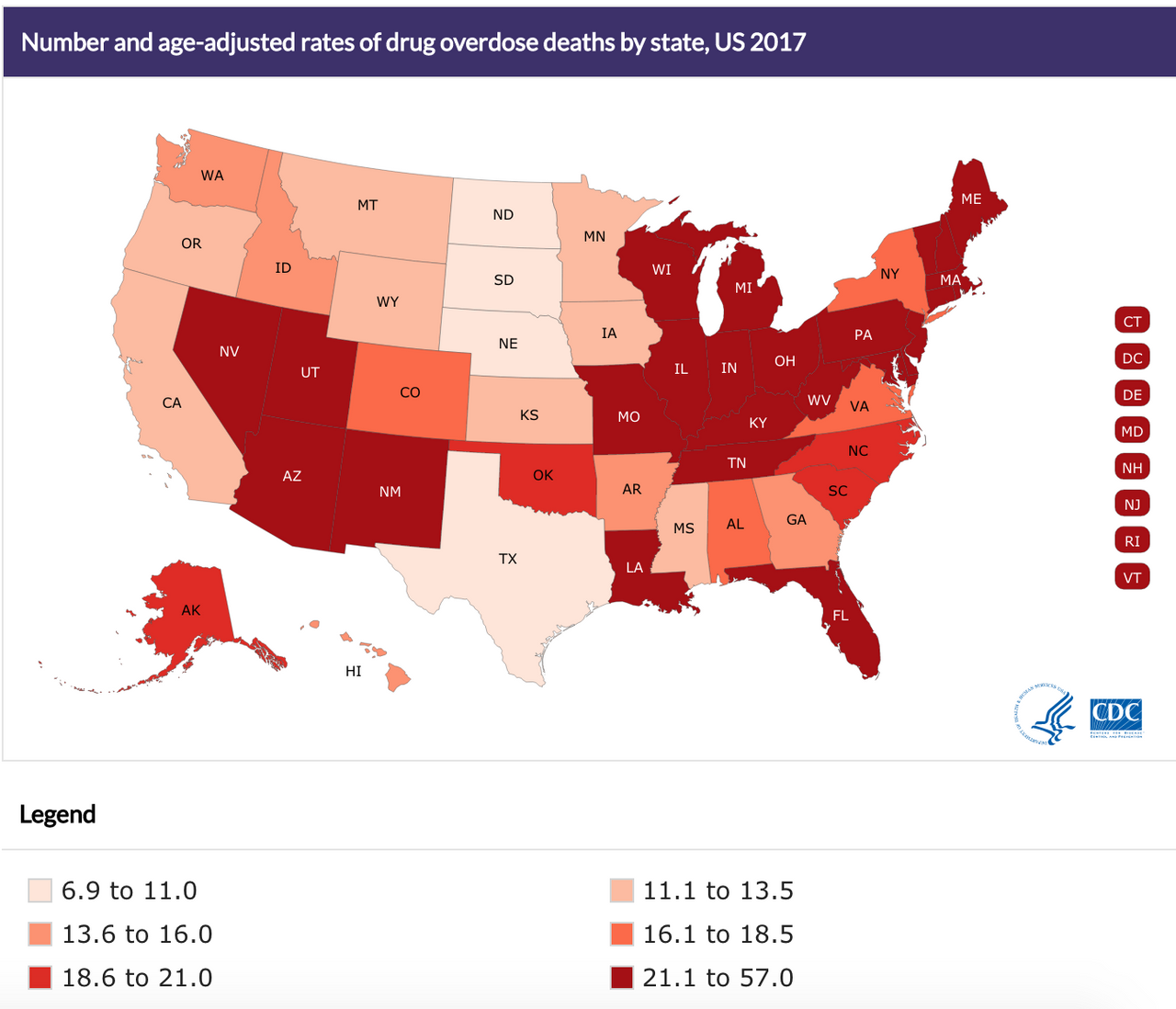 According to the Centers for Disease Control and Prevention (CDC), an average of 103 Americans die each day from opioid overdoses. In 2017, 70,237 people died from drug overdoses, with 68 percent of deaths (47,600) associated with opioids.

Moreover, a recent study by the CDC found that drug overdose deaths among middle-aged American women have increased by 260 percent since 1999. The increase was particularly stark among women between the ages of 55 and 64, who saw an astounding 500 percent increase in overdose deaths.

The opioid epidemic is largely the result of the unscrupulous marketing practices of drug manufacturers like Purdue Pharma and Insys Therapeutics, along with the major drug distributors —such as McKesson, Cardinal Health and Amerisource Bergen—who flooded communities with opioids and ignored the diversion of prescription painkillers to the black market though numerous “pill mills.”

A recent court filing has shed further light on the role played by Purdue Pharma, which is owned by the Sackler family.

Filed by the attorney general of Massachusetts last week, the court filing cites internal company documents from Purdue Pharma that implicate the Sackler family in the dishonest and aggressive marketing of Oyxcontin. Prior to this filing, the Sacklers, who maintain a veneer of respectability through their philanthropic activities, had succeeded in distancing themselves from the actions of their company.

According to the filing, members of the Sackler family, who in 2016 had an estimated wealth of $13 billion, were more intimately involved than previously acknowledged.

The company’s aggressive marketing tactics were presaged in a statement made by Richard Sackler, the company’s president from 1999 to 2003, at a company gathering shortly after OxyContin’s approval in 1995, claiming that “the launch of OxyContin tablets will be followed by a blizzard of prescriptions that will bury the competition. The prescription blizzard will be so deep, dense, and white.”

Sackler sought to shift the blame of addiction from their aggressive and misleading marketing of the highlyaddictive drug to those who use and abuse their drug.

“We have to hammer on abusers in every way possible,” Sackler wrote in a 2001 e-mail. “They are the culprits and the problem. They are reckless criminals.”

When a federal prosecutor raised concerns over 59 deaths in his state from Oxycontin, Sackler wrote to company executives in 2001, dismissing the figures as “not too bad. It could have been far worse.”

Sackler family members were also aware of Purdue’s failure to alert criminal authorities to abuses of its drug.

And while the Sackler family members had resigned their operating posts by 2007, Richard Sackler continued to be involved in the company’s operations, with a company sales official complaining in a 2012 email of his overbearing involvement in Purdue’s sales and marketing activities.

Although the company has faced numerous lawsuits for its role in creating the opioid epidemic—including a 2007 settlement in which the company paid fines of $643.5 million and top executives pleaded guilty to federal criminal charges—the Sackler family has so far avoided any accountability for their role.

In a recent interview with the Guardian, the chair of the US Food and Drug Administration’s (FDA’s) opioid advisory committee, Dr. Raeford Brown, claimed the agency is manipulating data in favor of the pharmaceutical companies seeking approval for new opioid painkillers: here.

STATES SUE OXYCONTIN MAKER Attorneys general in California, Maine, Hawaii and the District of Columbia filed lawsuits against Purdue Pharma, the manufacturer of OxyContin, alleging it misled the public by downplaying the opioid’s addictive nature. [HuffPost]

Merchants of death. How the pharmaceutical companies, Congress and the DEA made the opioid epidemic a billion-dollar industry: here.