This 26 February 2019 video from the USA says about itself:

Gillibrand is slated to attend a March 31 fundraiser at the New York home of Sally Susman, Pfizer’s executive vice president and chief corporate affairs officer, according to people with direct knowledge of the matter.

US studies: More misery brought to you by Big Pharma

A week rarely passes without the publication of a major study documenting the misery unleashed on Americans by the US pharmaceutical industry and its rapacious drive for profits.

Earlier this month a study analyzing Centers for Disease Control and Prevention (CDC) data found that more than 150,000 Americans died from alcohol and drug-induced fatalities and suicide in 2017, the highest number ever recorded.

The biggest factor in this shocking number of “deaths of despair” were drug overdoses, in particular from synthetic opioids like fentanyl. While illicitly manufactured fentanyl and related drugs are now responsible for increasing numbers of deadly overdoses, blame for the rising rates of opioid addiction lies with Big Pharma, which has flooded neighborhoods across the country with prescription opioids, fully aware of their addictive and potentially deadly properties.

Also in January, portions made public of a lawsuit filed by the state of Massachusetts allege that one of the founders of Purdue Pharma, who developed OxyContin, said in 1996 on the debut of the opioid painkiller that it would “be followed by a blizzard of prescriptions that will bury the competition.” Dr. Richard Sackler, whose family developed OxyContin, wrote at the time that they would push the drug by vilifying its addicted victims. “They are the culprits and the problem,” the email read. “They are reckless criminals.” 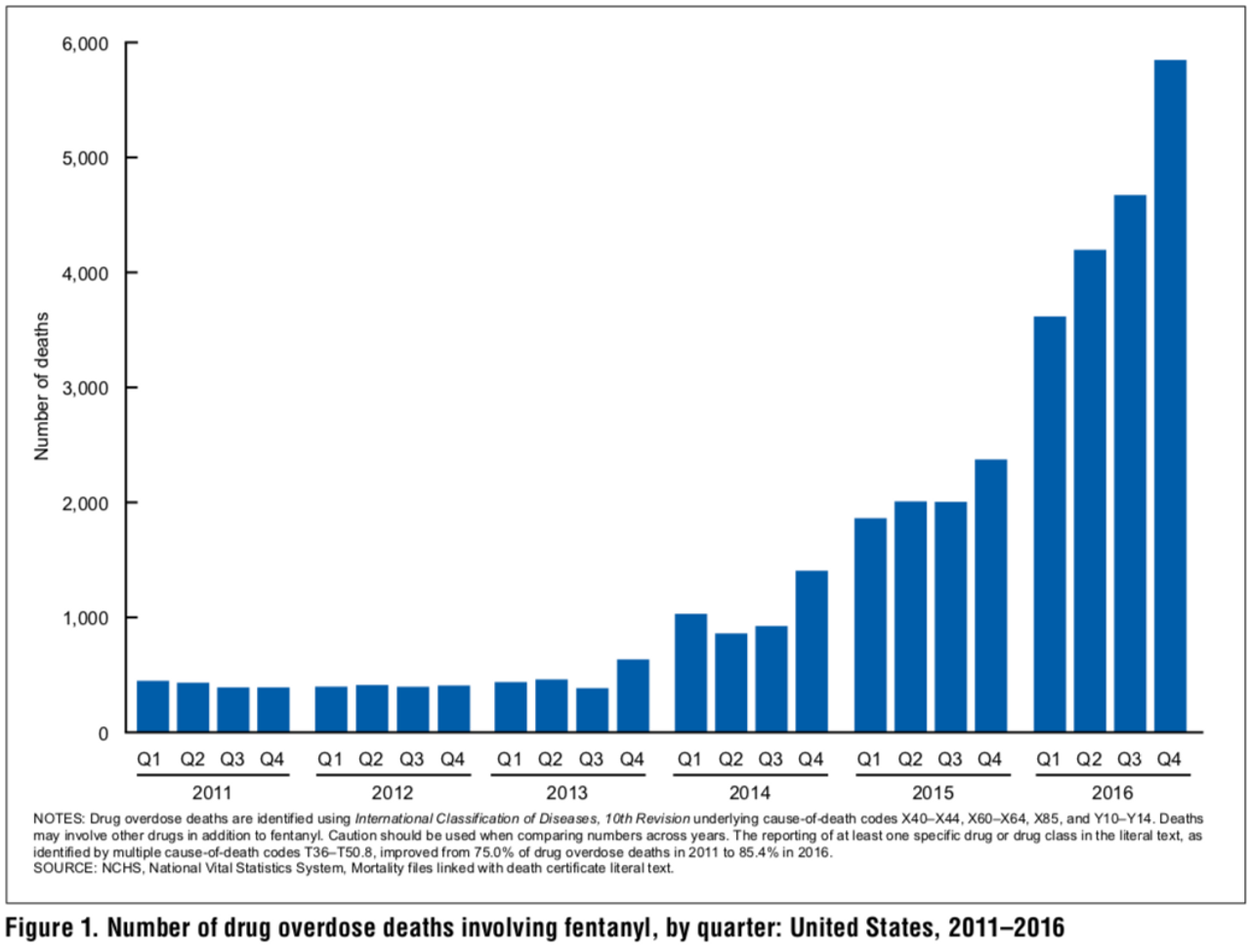 A study released Thursday by the CDC’s National Center for Health Statistics (NCHS) provided more grim detail on overdose deaths from fentanyl. In 2011–2012, fentanyl was involved in roughly 1,600 overdose deaths in the US in both years. From 2012 through 2014, fentanyl-related deaths more than doubled each year. By 2016, deaths attributed to fentanyl had skyrocketed to more than 18,335, a tenfold increase over 2011–2012 .

While researchers found exponential increases in fatal fentanyl overdoses among all age groups, the largest average annual percent change occurred among young adults aged 25–34 and 15–24. Men are dying from opioid overdoses at nearly three times the rate of women. Overdose deaths are also increasing faster among blacks and Latinos.

Fentanyl can be 50 times more powerful than heroin. It can shut down breathing in less than a minute. It is more likely to cause an overdose than heroin due to its potency and also because the high fades more quickly than with heroin, which means drug users may inject it more frequently, increasing the risk of overdose.

The New England states—Connecticut, Maine, New Hampshire, Rhode Island and Vermont—saw the largest increase in fentanyl overdose deaths, with a 102.2 percent increase per year from 2011 to 2016. This compares to the region comprising Arizona, California, Hawaii and Nevada, which saw a very small annual increase. Although researchers had no firm explanation for these geographical disparities, one theory is that it is easier to mix a few white fentanyl crystals into the powdered form of heroin that is more popular in the eastern part of the country.

Published Wednesday in the New England Journal of Medicine was a study that found that certain medications used to treat Attention Deficit Hyperactivity Disorder (ADHD) in teens and young adults may be more likely to cause psychosis, including symptoms such as paranoia, hallucinations, delusions and hearing voices.

Researchers found that patients ages 13 to 25 who had been newly prescribed amphetamines, such as Adderall and Vyvanse were more likely to develop psychosis than those prescribed methylphenidates, such as Ritalin and Concerta.

The rate of psychosis with either class of medications is relatively rare, occurring in one in 660, according to researchers. However, the CDC estimates that 11 percent of US children ages 4 to 17 are diagnosed with ADHD, making the potential pool of patients very large. While the study’s findings only showed the relationship between newly prescribed medications and psychosis, with over 3.5 million children currently taking an ADHD drug, this still amounts to tens of thousands of patients at risk each year.

According to data from IMS Health, US prescriptions to treat ADHD rose from 67.4 million in 2010 to 87.5 million in 2015. Sales of ADHD medications rose from $7.9 billion to $11.2 billion during this same period, a more than 40 percent increase.

Doctors are also prescribing these medications off-label for those who don’t have an ADHD diagnosis. Nonmedical use of ADHD medications on college campuses is exploding, with students obtaining the drugs from friends or family with a prescription, by obtaining a prescription by claiming to have ADHD, or from classmates selling their own prescriptions.

In these cases, the companies selling the drugs—including Shire and Teva—are profiting off of the use of “study drugs” on campuses across the country. Students dealing with the scramble for grades under the pressure of student debt, working in addition to studying, and competing for dwindling job opportunities upon graduation, are using the drugs to help them pull all-nighters to ace exams.

The drug companies are always striving to increase the appeal of their products, through consumer targeted advertising and other means. In 2016, the FDA approved Adzenys, a fruity-flavored film from Neos Therapeutics that dissolves in the mouth. The portability, convenience and tasty delivery increase the risk of abuse of the potentially addictive drug, not to mention the danger of psychosis documented in the study published in NEJM. 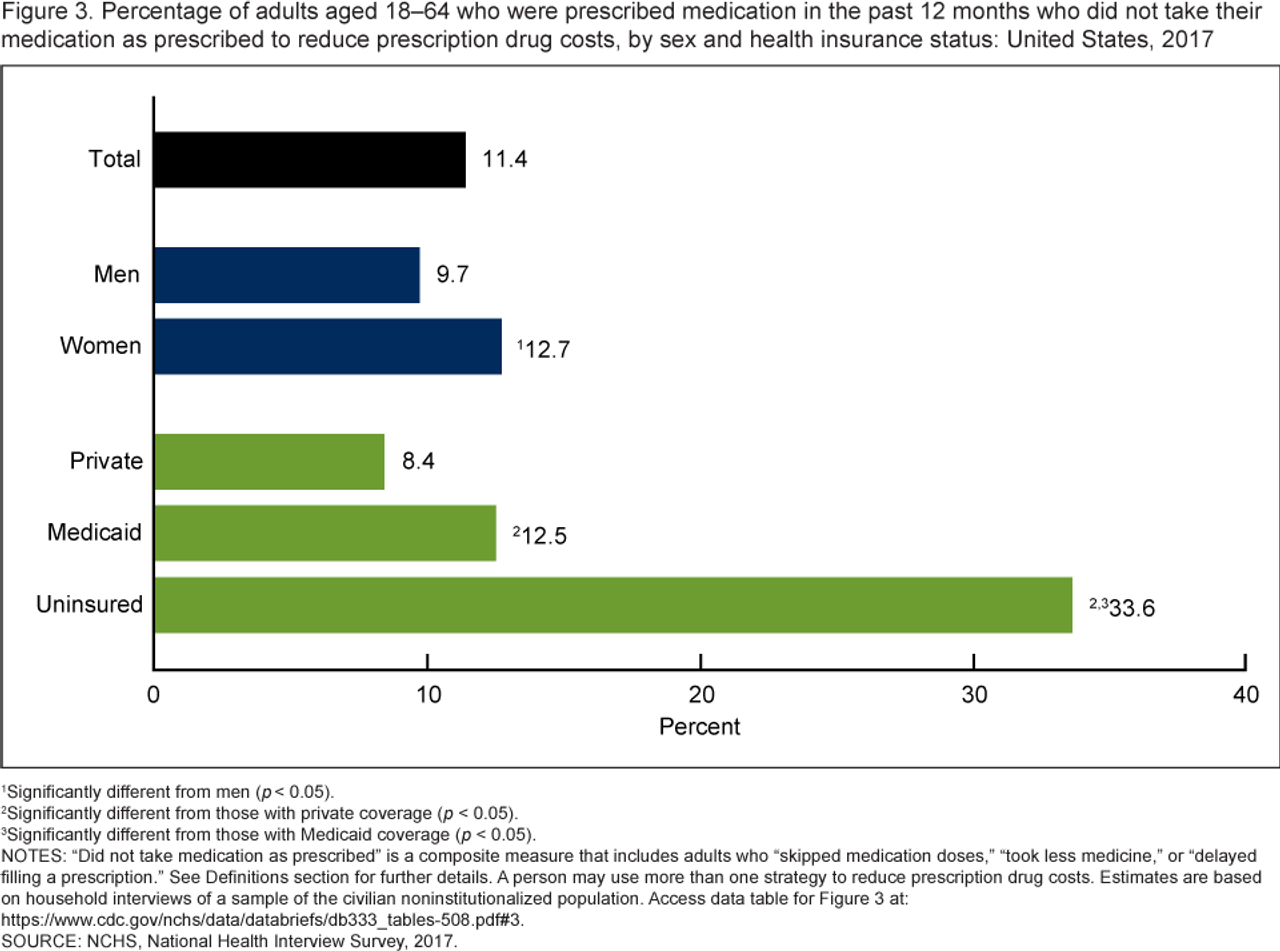 An NCHC Data Brief published in the center’s March 2019 edition examined the strategies used by adults aged 18-64 to reduce the costs of prescription medications. In 2017, those who were uninsured were far more likely to take measures to cut costs than those with either private insurance or Medicaid.

Those living under 400 percent of the poverty line—about $65,000 for a two-person household—are much more likely to be uninsured. With 12 percent of adults aged 18-64 uninsured, millions of Americans are forgoing prescription drugs due to cost, endangering their health and, potentially, their lives. This is but another demonstration of the incompatibility of the for-profit health system in the US, which places the cash hoards of Big Pharma executives over the well-being of the population, particularly its most vulnerable.

6 thoughts on “Big Pharma problems in the USA”