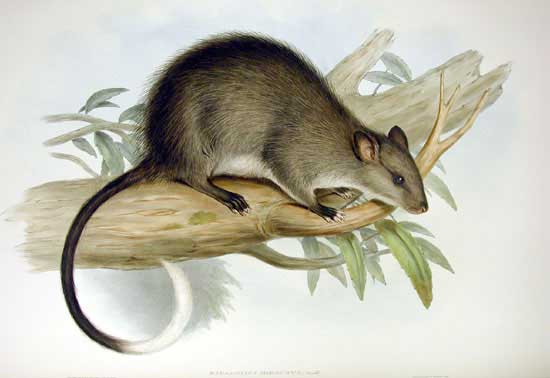 From the Australian Broadcasting Corporation today:

The black-footed tree rat has been rediscovered in Western Australia‘s north 30 years after it was last seen.

Parks and Wildlife staff on a monitoring expedition to the Bachsten Creek in the remote north-west Kimberley caught a glimpse of what appeared to be one of the native rats last year.

To confirm its existence, they installed a dozen remote cameras in the bushland over the wet season.

Parks and Wildlife Service ecologist Ben Corey said the cameras were collected after eight months in the field.

“Many species, such as the endangered northern quoll and golden-backed tree rat, as well as sugar gliders and scaly-tailed possums were recorded,” he said.

“However, the biggest surprise was photographic evidence of the black-footed tree rat.

“It had not been seen in the Kimberley since 1987, despite considerable survey efforts during this period.”

The black-footed tree rat is a large tree-dwelling rodent with distinctive black feet and a long black and white tail.

It was thought to have died out in the region due to large bushfires and human activity.

Mr Corey said another unexpected record of the species came from the identification of hair in python scat [faeces] which was found in a nest box at one of the monitoring sites.

The department said the north Kimberley was recognised as a stronghold for species that were now extinct across the northern regions of Australia.

It said each year, researchers from the department survey mammals in more than 100 locations across the north Kimberley.