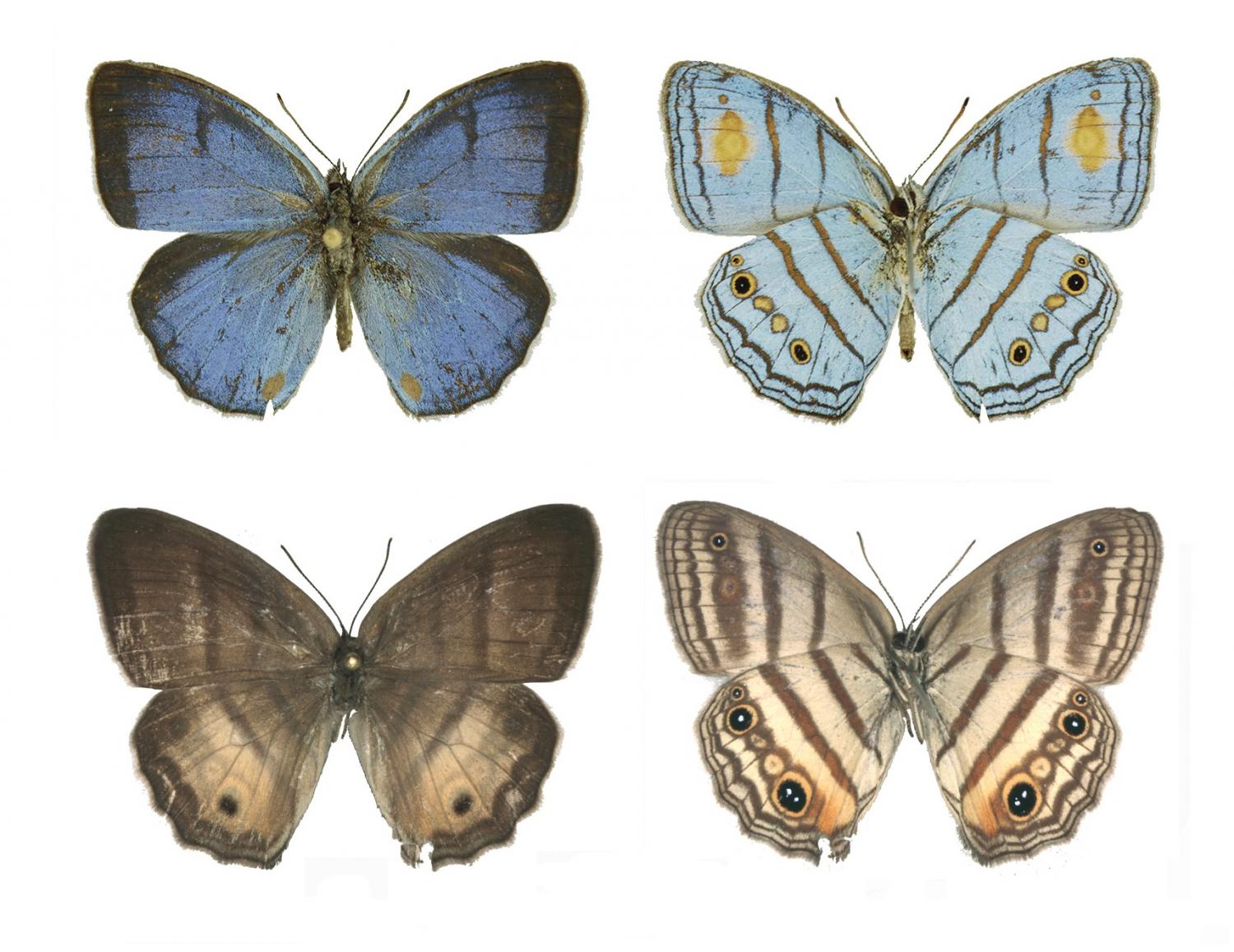 From the Florida Museum of Natural History in the USA:

Researchers recently discovered what was thought to be a distinct species of butterfly is actually the female of a species known to science for more than a century.

An international team of nine butterfly researchers from the U.S., Brazil, the U.K., Peru and Germany used DNA sequence data to associate the female sunburst cerulean-satyr, or Caeruleuptychia helios, an Amazonian brush-footed butterfly, with its male counterpart.

Males and females of this group look dramatically different from each other, a phenomenon known as sexual dimorphism, and the species was named and described in 1911 based on the brilliantly iridescent blue males. Rarer than the male, the brown female was considered another species and was recently named and placed in a different genus, Magneuptychia keltoumae.

A study correcting the classification error was published in Insect Systematics and Evolution.

“Our study will serve as the basis for developing a firm understanding of true species diversity of this group and of Neotropical butterflies in general,” said Shinichi Nakahara, the study’s lead author and a research associate at the Florida Museum of Natural History’s McGuire Center for Lepidoptera and Biodiversity at the University of Florida. “These findings are extremely valuable at a time when the biodiversity of the Neotropics is threatened since it will be impossible to recognize and document the region’s unique elements of biodiversity after they are gone.”

As part of the project, DNA bar codes — short, diagnostic gene sequences — were collected and analyzed for more than 300 species across the euptychiines group of butterflies.

“None of us thought about this possibility before, and we were all surprised by this outcome of our DNA analysis,” Nakahara said. “Given that males and females of most euptychiine butterflies look more or less the same, I guess no one thought that the female would be so different compared to the male.”

The discovery of the female contributed to the recognition of the male and female of two other species in this group, including a new species from cloud forests in eastern Ecuador, Trembath’s cerulean-satyr, or Caeruleuptychia trembathi. The different-looking males and females of the two species make this group one of the most sexually dimorphic among butterflies.

“This research increases the number of cases of euptychiine butterflies known where the males display bright colors, but the females have the dull, brown wings typical of most species in the group,” said Keith Willmott, a study co-author and associate curator of Lepidoptera at the Florida Museum.

A better understanding of the species diversity and relationships among euptychiines will make it possible to think about broader questions, such as how they have diversified and the role wing patterns play in signaling between the sexes, Nakahara said.

“Fortunately, the butterflies are much better at distinguishing one another among the hundreds of other similar species than butterfly experts are,” he said.

Butterflies fly during the day while moths travel at night – or so you might think. In reality, their behavior is much more complicated. A new study offers the first comprehensive overview of the surprisingly complex question of when butterflies and moths are active: here.