Scholars have long discussed the introduction and spread of iron metallurgy in different civilizations. The sporadic use of iron has been reported in the Eastern Mediterranean area from the late Neolithic period to the Bronze Age. Despite the rare existence of smelted iron, it is generally assumed that early iron objects were produced from meteoritic iron. Nevertheless, the methods of working the metal, its use, and diffusion are contentious issues compromised by lack of detailed analysis.

Since its discovery in 1925, the meteoritic origin of the iron dagger blade from the sarcophagus of the ancient Egyptian King Tutankhamun (14th C. BCE) has been the subject of debate and previous analyses yielded controversial results. We show that the composition of the blade (Fe plus 10.8 wt% Ni and 0.58 wt% Co), accurately determined through portable x-ray fluorescence spectrometry, strongly supports its meteoritic origin.

In agreement with recent results of metallographic analysis of ancient iron artifacts from Gerzeh, our study confirms that ancient Egyptians attributed great value to meteoritic iron for the production of precious objects. Moreover, the high manufacturing quality of Tutankhamun‘s dagger blade, in comparison with other simple-shaped meteoritic iron artifacts, suggests a significant mastery of ironworking in Tutankhamun‘s time. 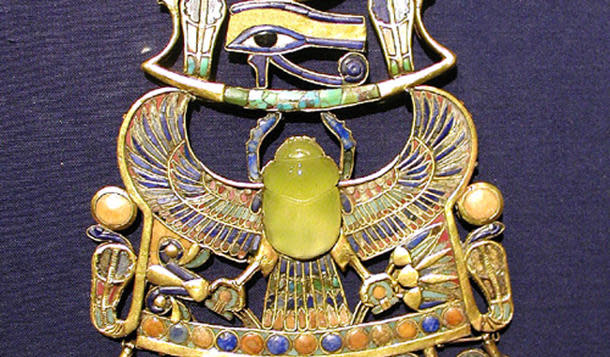 The dagger was not the only relic in King Tut’s possession that was rare and unusual; he also possessed a scarab necklace made of silica glass that might have been created by the heat of a meteorite impacting the desert sand and melting it down.