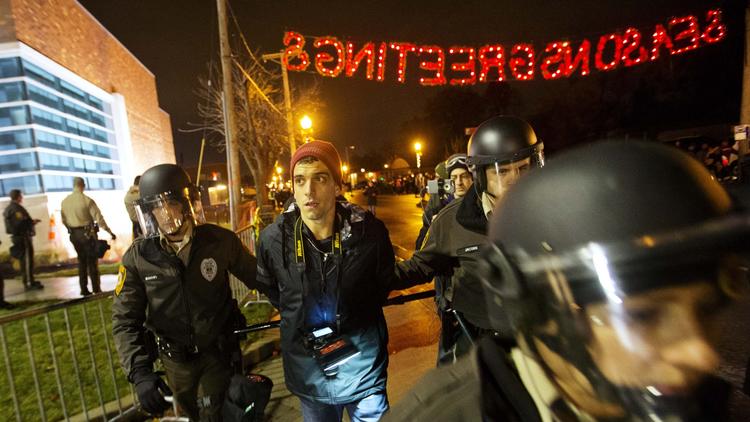 A journalist’s arrest during a protest near the Ferguson, Mo., police headquarters early Sunday drew renewed attention to disputes over 1st Amendment rights in the wake of a white police officer’s killing of an unarmed black man.

Trey Yingst, a reporter with News2Share, was accused of unlawful assembly and taken into custody, according to St. Louis County police. News2Share publishes stories by freelance reporters online. …

A police summary notes that Yingst was among a group that was obstructing traffic at South Florissant Road and Compton Avenue. …

Several witnesses said Yingst was on the sidewalk when he was arrested.

Shortly after his release from jail, Yinsgt said on Twitter that he had been “arrested for exercising my 1st amendment rights on a public sidewalk.”

The protests in Ferguson began Aug. 9, when police Officer Darren Wilson fatally shot an 18-year-old unarmed black man, Michael Brown. In August, some journalists were arrested while covering the demonstrations.

On Sunday, the American Civil Liberties Union said it was “unclear what legal authority police officers would have had to order him to disperse.”

“We are deeply troubled that the 1st Amendment rights of the media are still being violated in spite of the recent court order we secured against such action by the County of St. Louis,” said Jeffrey Mittman, executive director of the ACLU of Missouri, in a statement. “We will continue to monitor the situation and if necessary swiftly pursue aggressive action to ensure that unlawful interference with the press comes to an end.”

U.S. District Judge Catherine Perry ruled in October that the practice of requiring “peaceful demonstrators and others to walk, rather than stand still, violates the Constitution.” She issued a preliminary injunction banning St. Louis County Police and the Missouri State Highway Patrol from using the tactic.

From NBC News in the USA:

FERGUSON, Missouri — When Londrelle Hall and Ray Mills heard about the killing of unarmed black teenager Michael Brown, they decided they wanted to do something not only to pay tribute, but also to change the image of African-American men. That’s when the pair decided that they would run more than 540 miles from Atlanta to Ferguson, Missouri, in hope of making a difference.

Neither of the men considers himself a runner; in fact, both have full-time jobs — Mills, 29, running a credit repair company in Atlanta and Burbank, California, and Hall, 28, as a videographer and artist. But when they heard about the killing, Hall said, it gave them a reason to run.

“I had a reason to run, not to run from my problems, but to run towards a problem and run for the problems of the world and the problems of America and what’s going on now.” he said.

A St. Louis County grand jury is scheduled to reconvene today to continue deliberations on whether to bring charges against Darren Wilson, the Ferguson, Missouri police officer who shot Michael Brown on August 9: here.