This 3 June 2020 video from the USA says about itself:

Police have attacked journalists reporting on Black Lives Matter protests more than 100 times in the past week.

In US news and current events today, despite freedom of the press, police are attacking journalists nationwide. Here’s a compilation of reporters being targeted for doing their jobs.

TRUMP CALLED IN THE MILITARY TO SCARE PROTESTERS. THEY CAME ANYWAY. Despite fearsome military displays and escalating police violence, protesters in Washington came out in force anyway Tuesday night, many of them saying they were stirred by the president’s outrageous rhetoric and efforts to stifle peaceful protests. Meanwhile, no governor accepted the president’s offer of military assistance to crush protests. [HuffPost]

RELIGIOUS LEADERS ‘TEAR-GASSED’ FOR TRUMP PHOTO OP Clergy were passing out water and snacks to protesters in front of St. John’s Church, in Washington’s Lafayette Square, before law enforcement officials in riot gear fired tear gas and flash-bangs to disperse the crowd so that President Donald Trump could walk to the church for a photo op. The Rev. Gini Gerbasi, rector of a different church, said she and seminarian Julia Joyce Domenick were tear-gassed and driven away by police. Washington’s Roman Catholic archbishop also roundly criticized Trump’s visit to the Saint John Paul II National Shrine on Tuesday. [HuffPost]

Trump’s use of the Bible was obscene. He should try reading the words inside it.

TRUMP VOWS TO UNLEASH MILITARY, PROTESTERS TEAR-GASSED FOR PHOTO OP Donald Trump issued an unprecedented presidential threat from the Rose Garden: He would send “thousands of heavily armed soldiers” into Washington to quell protests and would follow by invoking the Insurrection Act to deploy the military into other U.S. cities if mass protests against police brutality continued. As he spoke, federal law enforcement officials working alongside military police officers fired projectiles and tear gas upon American citizens protesting peacefully just yards from the White House so that the president could be photographed holding up a Bible in front of a nearby church. The church itself was “outraged” by the measures — and Washington residents opened their doors to protesters trapped by the police. [HuffPost]

WARREN CALLS FOR DOJ PROBE INTO BARR’S ORDER REMOVING PROTESTERS Sen. Elizabeth Warren called for an investigation following the violent dispersal of protesters near the White House amid reports Attorney General William Barr personally ordered federal officers to remove them. The Massachusetts Democrat wrote to the inspector general at the Department of Justice saying she was appalled after largely peaceful protesters gathered in Lafayette Park were confronted by federal police wielding tear gas and flash-bang grenades before Trump’s stroll to a church for a photo op. [HuffPost]

This 2 June 2020 video from the USA is called Reverend describes being pushed out from church for Trump photo-op.

Don Lemon asks whether Trump is “declaring war” on Americans.

Michael Jordan shows support for police brutality protests “we have had enough.”

TRUMP’S HISTORY OF RACISM CATCHES UP WITH HIM After decades of cultivating racists, Trump continued his struggles trying to deal with the worst crisis in race relations in decades as he remained ― outside of a brief, tear-gas-enforced photo opportunity Monday at a damaged church ― bunkered in the White House. “Most of you are weak,” Trump berated the nation’s governors on a video conference Monday, blaming them for not using violent enough tactics against protesters. “You have to dominate or you’ll look like a bunch of jerks. You have to arrest and try people.” [HuffPost]

FACEBOOK ENGINEER RESIGNS OVER HANDLING OF TRUMP POSTS Timothy Aveni, Facebook engineer who works to combat the spread of misinformation on the platform, is resigning over how CEO Mark Zuckerberg has handled Trump’s “increasingly dangerous rhetoric.” “For years, President Trump has enjoyed an exception to Facebook’s Community Standards; over and over he posts abhorrent, targeted messages that would get any other Facebook user suspended from the platform,” Aveni wrote on Facebook. “Mark always told us that he would draw the line at speech that calls for violence. He showed us on Friday that this was a lie.” [HuffPost]

SENATE GOP-ERS BRUSH ASIDE TRUMP’S VIOLENCE AGAINST PROTESTERS Top Senate Republicans brushed aside the use of force against hundreds of peaceful protesters gathered to demand an end to police brutality against Black Americans near the White House. Some questioned whether it was a real protest in the first place. “That wasn’t even a protest ― that was a provocation that was created deliberately for national television,” Sen. Marco Rubio (R-Fla.), the acting chairman of the Senate Intelligence Committee, told reporters on Capitol Hill. “Tell me those are real protesters and not professional agitators,” Rubio added. [HuffPost]

POLICE MAKE AP REPORTERS STOP COVERING NEW YORK PROTEST New York City police officers surrounded, shoved and yelled expletives at two Associated Press journalists covering protests Tuesday in the latest aggression against members of the media during a week of unrest around the country. Portions of the incident were captured on video by videojournalist Robert Bumsted, who was working with photographer Maye-E Wong to document the protests in lower Manhattan over the killing of George Floyd in Minneapolis. [AP]

New Yorkers said f**k the police, so the police rioted.

Schools are considering terminating their contracts with the police.

There’s one big reason why police brutality is so common in the U.S.

The police have a white nationalist problem — and have for at least 15 years. 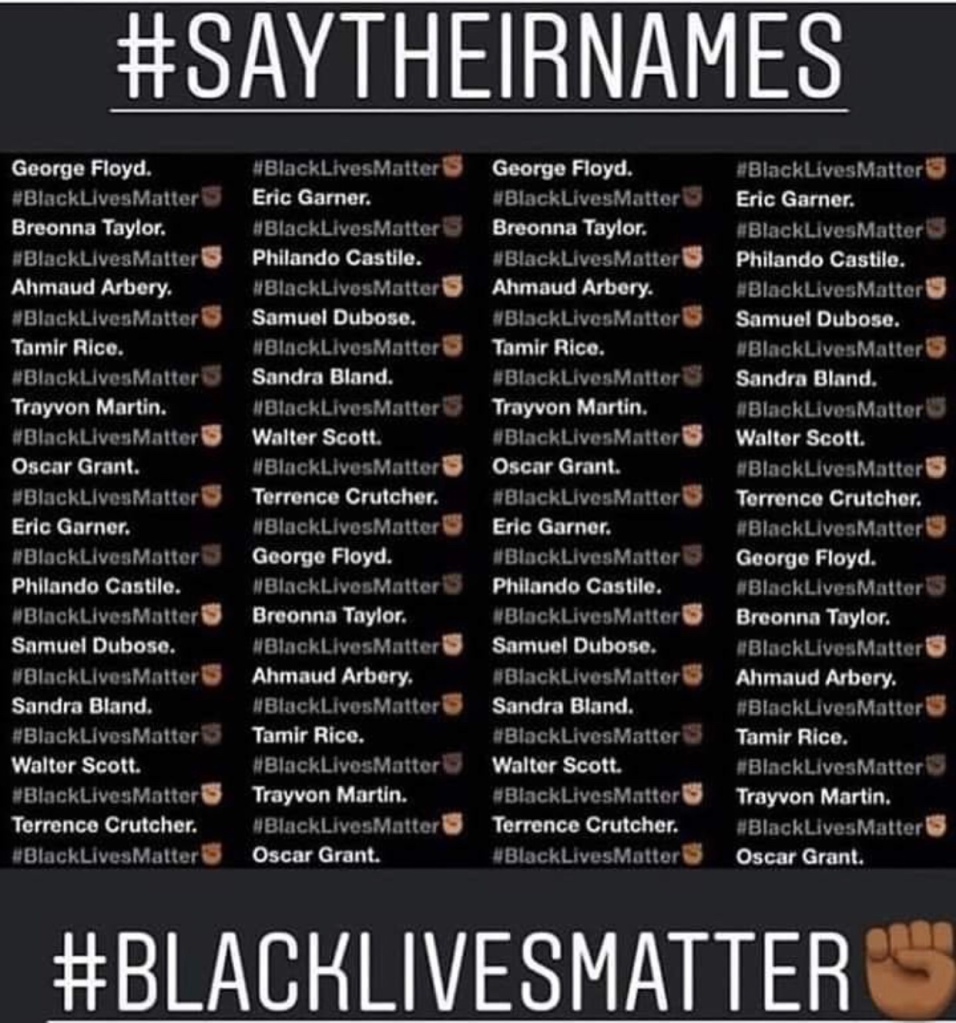 DEFUND THE POLICE — It would be nice to blame the chaos and cruelty unleashed by police forces across the nation on Trump’s cartoonish brutality. He’s certainly provoking more violence, but the major policy choices that have led to the epidemic of police brutality — from macroeconomic management to police procurement — have been bipartisan. It ends by defunding police forces and reimagining community maintenance as an act of support, not an act of violence, writes HuffPost’s Zach Carter. [HuffPost]

LA RESIDENTS FLOOD ZOOM MEETINGS WITH CALLS FOR LAPD CHIEF TO RESIGN Los Angeles residents flooded a public Zoom meeting with anger and frustration on Tuesday over the city’s response to ongoing protests following the death of George Floyd. Hundreds of citizens called into the Los Angeles Police Commission’s first virtual meeting since the demonstrations began. For more than eight hours, dozens of residents repeatedly called on Los Angeles Police Department Chief Michel Moore to resign after he made comments on Monday blaming looters for “capitalizing” on the man’s death at the hands of a Minneapolis police officer last week. [HuffPost]

LOUISVILLE POLICE CHIEF FIRED AFTER BODY CAMS INACTIVE IN FATAL SHOOTING Louisville Mayor Greg Fischer fired Police Chief Steve Conrad after learning that the officers involved in a shooting that killed a man early Monday amid tumultuous protests rocking the Kentucky city did not turn on their body cameras. “This type of institutional failure will not be tolerated,” Fischer said. The police department already facing questions and mounting community rage over the March killing by officers of Breonna Taylor, a Black 26-year-old EMT shot as she lay in bed. [HuffPost]

FLORIDA COP SUSPENDED AFTER SHOVING KNEELING BLACK WOMAN Florida police officer has been suspended after he was seen shoving a kneeling protester at an anti-racism demonstration. Videos captured by bystanders show the man, identified by authorities as Fort Lauderdale police officer Steven Pohorence, confronting protesters outside a parking garage. As the officer, who appears to be white, is turning to walk away, he pushes to the ground a Black woman who is kneeling with her hands in the air. A Black female police officer can be seen pulling Pohorence from the crowd and scolding him as other demonstrators scream in response to his actions. [HuffPost]

AUTOPSY FINDS GEORGE FLOYD DIED OF ‘HOMICIDE BY ASPHYXIA’ An independent autopsy on George Floyd conducted at the request of his family concluded his cause of death was “homicide caused by asphyxia due to neck and back compression that led to a lack of blood flow to the brain.” The report by Dr. Michael Baden and Dr. Allecia Wilson found that Floyd likely died at the scene where a Minneapolis police officer knelt on his neck for nearly nine minutes. [HuffPost]

STORE OWNER REGRETS 911 CALL ON GEORGE FLOYD The owner of Cup Foods, the Minneapolis store where a clerk called 911 on George Floyd, says his business will no longer involve the police in certain incidents until law enforcement stops “killing innocent people.” Mahmoud Abumayyaleh posted a lengthy note on Facebook to say that he supports the protests over the death of Floyd, a Black man who died after a white officer knelt on his neck outside Cup Foods, and said his store is “deeply saddened for our part of this tragedy.” Abumayyaleh also said that he’ll be “donating to pay for George Floyd’s memorial service.” [HuffPost]

Seven ways to support Black lives and protesters with your money.

Here are a few ways to reduce your coronavirus risk while protesting.

Anti-racism demonstrations are being held in Brazil, where around half the population is Black or mixed race.

The protesters blame President Jair Bolsonaro for the growing discrimination.

Woman pinned down by police officers in London: “I can’t breathe”. By Thomas Scripps, 3 June 2020. Police violence is directed against the working class, particularly its poorest sections, and falls disproportionately on black communities.

This video is about the demonstration in Rotterdam today.

Australian police officers assault Aboriginal boy in Sydney. By Oscar Grenfell, 3 June 2020. The widespread anger provoked by the attack has prompted nervousness from the political establishment, under conditions of mass protests internationally against police violence.