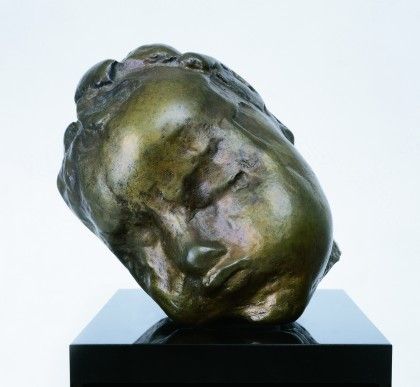 From kunstpedia in the Netherlands:

It is every collector’s dream: buying for relatively little money an unknown work of that eventually turns out to be by a world-famous artist. A French private collector bought at [an] auction for a small amount a statue of a child’s head. Little did he know that it was by the Romanian artists Constantin Brancusi.

The leading expert Teja Bach studied the figure thoroughly and identified it as an original work of art by the famous Romanian sculptor Constantin Brancusi (1876-1957). The sculptures turns out to be an up to now unknown version of L’Enfant endormie (The sleeping child, 1906-1907).

Brancusi is known for….

Brancusi is best known for [the] simple, geometric shapes of his sculptures. L’Enfant endormie is an early work made in the impressionist and opulent style of Auguste Rodin and Medardo Rosso. The sleeping child is composed in a natural manner, which formed a starting point in Brancusi’s development towards more abstract work as La Muse endormie (around 1910) and his later famous egg–shaped sculptures.

Brancusi often made more versions of a theme and used different materials, such as plaster, marble or bronze. L’ Enfant endormie is different from his other works as Brancusi painted the plaster, giving the sculpture an appearance of bronze.

It is very difficult to identify such a work as one by Brancusi, as the risk of it being a forgery is greater. His later abstract sculptures are far more difficult to imitate.

The discovery of such a work by Brancusi is pretty rare. Fifteen years ago a new version of La Muse endormie was [discovered], which was first shown in 2004 at the Guggenheim Museum. In 1985 a new work was also discovered. According to curators to Museum Boijmans Van Beuningen it is unlikely that more unknown works by Brancusi will be discovered.

L’ Enfant endormie (The sleeping child, 1906-1907) is on display during the exhibition Brancusi, Rosso, Man Ray – Framing Sculpture at Museum Boijmans Van Beuningen from February 8 2014 until May 11 2014.