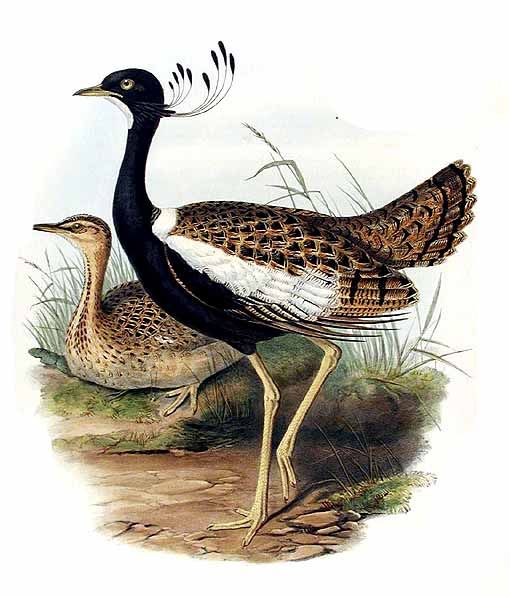 From The Times of India:

RAJKOT: The forest department has counted 48 lesser floricans, the critically endangered smallest bustards of the world, in Velavadar Blackbuck National Park (BNP) in Bhavnagar district. The counting was done on Saturday and Sunday.

According to assistant conservator of forests, BNP, D P Vaghela, of the 48, 44 were males and four were females. Forest officials said BNP is the only grassland in north western India that has observed a steady population of lesser florican. Last year, 54 were counted here.

Lesser florican is endemic to the Indian subcontinent and listed under Schedule I species under the Indian Wildlife (Protection) Act, 1972.

Forest officials said earlier, lesser floricans were found in many parts of the region, but now these birds are found at very few places in the state.

“Degradation of grasslands in Gondal, Rajkot and Jamnagar earlier attracted lesser floricans. But they are seldom seen here. Velavadar National Park is the only grassland in north western India where floricans are reported in good number, largely due to better grassland management and protection,” he said.

Two years ago, researcher G S Bhardwaj of Wildlife Institute of India (WII) carried out a study on lesser floricans from across the country. The study observed that most of the potential florican habitats in the state were converted into cotton fields where large quantities of pesticides are being used, the greatest threat to floricans here.

“Lesser florican is best known for the leaping breeding displays by males during the monsoon,” an official said.

At Tal Chhapar, a wildlife sanctuary in the heart of the Thar desert, a strange drama is staged twice every year. In the blistering heat of summer from March to April and the post-monsoon months of September and October, up to a hundred blackbuck males stake out territories on the flat land to entice females to mate with them in a unique assemblage called a lek. Female blackbuck who visit the lek generally spend large amounts of time evaluating males before choosing one as a mate. A large part of this evaluation seems to be based on sniffing — even when being courted, females are so intent on inspecting odors from the dung piles, that they are often oblivious to the males’ antics: here.