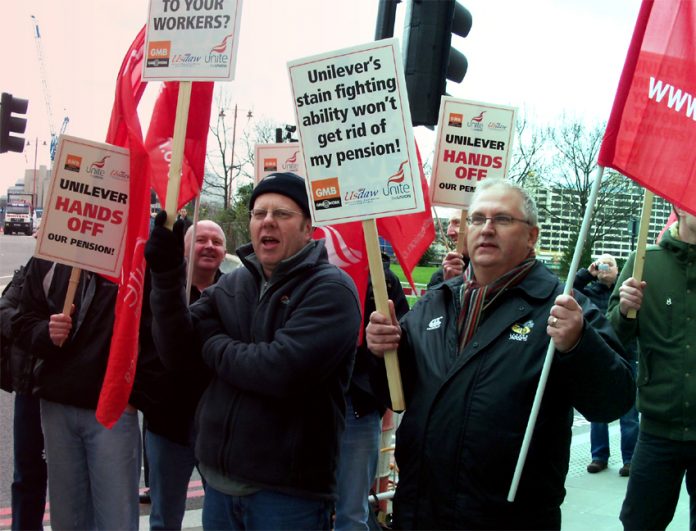 Unilever workers from all over the country yesterday descended on the London headquarters, outraged at the company’s ending of their final salary pension scheme.

They began the day touring central London in a battle bus, then had a march round to the front of the Unilever building where they organised a lively mass lobby to demand their final salary pensions are restored.

On the march, the Unilever workers chanted, referring to Polman the head of the company ‘Unilever there is no need, it is just Polman’s corporate greed!’ and ‘Where’s my pension gone? Far, far away!’ and ‘Polman’s got my pension pot!’

Paul Comerford from the Purfleet site in Essex told News Line: ‘On the battle bus, we were waving flags, chanting and singing and definitely getting the attention of everyone we passed.

‘People were waving out of windows and giving us thumbs up, the support was amazing.’

‘Our pensions are spiralling downwards all the time, I  have 15 or 20 years left. If they keep changing the pension plans what are we going to be left with when we retire?’

Mike Rooke, the joint senior Unilever shop steward in the Unite union said: ‘We are here because we are in dispute with the unbelievable plans to close our final salary pensions.

‘Some workers have come down from Purfleet in Essex, some from Gloucester, some from Liverpool, from Burton-upon-Trent which is north of Birmingham.

‘However, some of my members stand to loose as much as 40 per cent of their pension.’

A rolling 10-day programme of strike action by workers at corporate giant Unilever will hit production of several top brands at sites across Britain, unions revealed today: here. And here.