Danaus chrysippus, known as the Plain Tiger or African Monarch, is a common butterfly which is widespread in Asia and Africa. It belongs to the Danainae (“Milkweed butterflies”) subfamily of the brush-footed butterfly family, Nymphalidae. It is a medium-sized, non-edible butterfly, which is mimicked by multiple species.

The Plain Tiger is believed to be one of the first butterflies to be used in art. A 3500-year-old Egyptian fresco in Luxor features the oldest illustration of this species.

The Plain Tiger can be considered the archetypical danaine of India. Accordingly, this species has been studied in greater detail than other members of its subfamily occurring in India. The Plain Tiger is a medium-sized butterfly with a wingspan of about 7–8 cm. The body is black with many white spots. The wings are tawny the upper side being brighter and richer than the underside. The apical half of the fore wing is black with a white band. The hind wing has 3 black spots around the center. The hind wing has a thin border of black enclosing a series of semicircular white spots.

Background color and extent of white on the forewings varies somewhat across the wide range.

The male Plain Tiger is smaller than the female, but more brightly colored. In addition, male danaines have a number of secondary sexual characteristics. In the case of the Plain Tiger, these are:

The male has a pouch on the hindwing. This spot is white with a thick black border and bulges slightly. It is a cluster of specialised scent scales used to attract females.

The males possess two brush-like organs which can be pushed out of the tip of the abdomen.

The range of the Plain Tiger extends from Africa and southern Europe, eastwards via Sri Lanka, India, and Myanmar to China and Sulawesi. 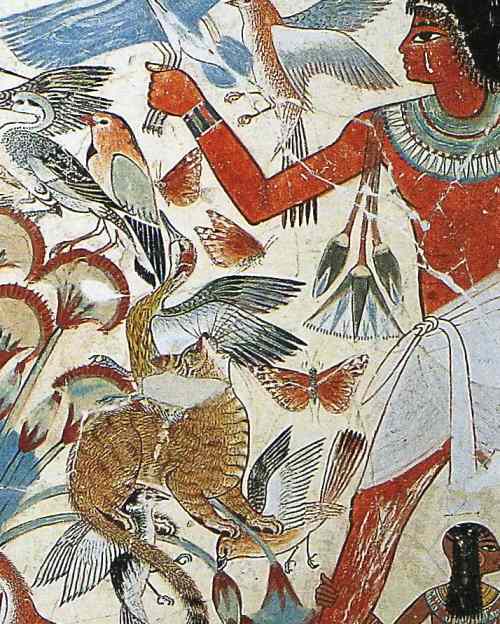 This picture shows butterflies on an ancient Egyptian fresco.

Like many poisonous animals, the African monarch butterfly’s orange, white and black pattern warns predators that it is toxic. Warning patterns like this are usually consistent across individuals to help predators learn to avoid them. However, a recent study, published February 27 in the open-access journal PLOS Biology, shows how a population of African monarch butterflies (Danaus chrysippus) breaks this rule and has highly variable warning patterns. The study, by Simon Martin of the University of Edinburgh, UK and colleagues shows that the unlikely answer lies in the interaction with a bacterium that specifically kills male butterflies.

Previous research had shown that all female butterflies in this East African population have two unusual features: Firstly, they have a new arrangement of their chromosomes where the chromosome containing genes that control color patterns is fused to their one of their sex chromosomes (called the W chromosome). This new chromosome is called the neo-W. Secondly, they are all infected with a bacterium called Spiroplasma that kills all of their sons. What was not clear, however, was whether these two features were linked, and whether they could explain the highly variable color patterns that changed from season to season.

To answer this, the researchers analyzed the entire DNA sequence of the bacteria and the female butterflies’ chromosomes. This showed that the neo-W chromosome alters color patterns and has spread rapidly through the population, aided by the male-killing bacteria. However, because the bacterium only allows female offspring, it promotes the survival of one particular color pattern gene that is always passed from mother to daughter. This left one puzzle for the scientists still to solve — if the females all carried the same color gene, then why was the East African population so variable?

The study found that this female color gene has only a weak effect that is overridden by color genes from the father. Therefore, fathers with different patterns will produce daughters with different patterns. Seasonal fluctuations in wind patterns are thought to affect which subspecies of male immigrants end up in this region, leading to seasonal changes in female color patterns. Even though they always resemble their father, the infected hybrid daughters, unable to produce sons, represent a genetic dead-end for fathers, whose color pattern genes only survive for one generation before being wiped out.

Dr. Simon Martin said, “The relatively fast emergence and spread of a new chromosome, combined with the short life cycle of the butterfly, allows us to study how the microbe is altering the evolution of the butterfly, almost in real-time. We are continually discovering new ways in which microbes manipulate their hosts, and male-killing is just one example of this. It makes you wonder to what extent the evolution of other organisms — even humans — is affected by such unseen forces.”