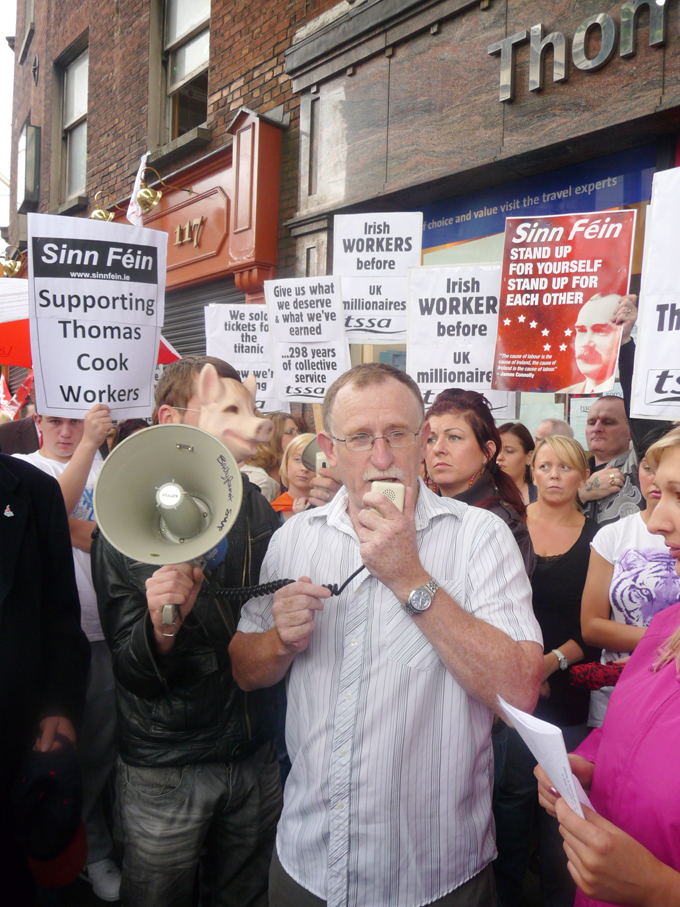 This photo shows Thomas Cook workers in Dublin, Ireland who occupied the shop in Grafton Street against redundancies in 2009.

NINE thousand Thomas Cook workers lost their jobs yesterday with a further 20,000 threatened across Europe as the company, founded in 1841, went bust. Trade unions called for it to be renationalised.

Thomas Cook has a £1.7bn debt. Its entire UK fleet has been grounded and its workforce, including 1,000 in Peterborough, turned up to work yesterday morning only to find they had no job. Meanwhile, 50,000 holidaymakers were stranded in 53 destinations in 18 countries around the world.

Some 16,000 holidaymakers were booked to come back yesterday, and authorities hope to get at least 14,000 of them home on chartered flights. But there was total chaos at the airports with furious families waiting for hours to try to get home.

There were also cases of hotels ‘holding passengers hostage’ because the hotel managers feared they would not be paid. Thomas Cook policy in many cases is to make payment after guests have left.

Hotel security forces were deployed to block guests from leaving, demanding upfront payments from them, even though they had already paid for their package holiday through Thomas Cook.

‘This was run under public ownership between 1948 and 1972 very successfully, the government should have intervened. When the banks needed a bailout there was no limit to the amount of money put in.

‘It will cost more to repatriate the 150,000 passengers stranded abroad than it would have cost to save the company.’

Shadow Chancellor John McDonnell said: ‘Thomas Cook was once publicly owned and this looks like another privatisation failure over the years.

‘When we campaigned for steel, if you remember, we campaigned and forced the government to intervene and did stabilise the situation and gave the steel industry a bit of a future.

‘I would have liked them to intervene and just allowed a bit of a breathing space so all the issues around the future of the company could have been dealt with and I think we could have saved the jobs.’

He said: ‘There are 600 pilots in Thomas Cook and they will have been devastated by the news overnight … in Germany at the moment, the German government is looking at financing Condor, the German arm of Thomas Cook. Most people thought that the UK government would have looked sympathetically to see if it could have leaned on the UK banks and creditors to give Thomas Cook a lifeline.’

This 23 September 2019 video says about itself:

British holidaymakers were thrown out of their hotels abroad as others scrambled for information on how to get home after the collapse of travel giant Thomas Cook.

From job losses to cancelled honeymoons, the demise of the British company left an estimated 600,000 people stranded worldwide.

By Richard Tyler in Britain:

Britain’s largest package holiday operator Thomas Cook was placed in compulsory liquidation in the early hours of Monday morning after failing to secure funding to keep the firm going. The consequences have been immediate and massive.

The Financial Times described the collapse as spreading “chaos through the international travel industry.”

The overnight collapse has left hundreds of thousands of holidaymakers, and those who had purchased flights, stranded overseas. The UK government has been forced to implement an emergency repatriation operation, the largest in peacetime, to bring back the 150,000 UK-based individuals from 55 airports. The 800,000 future bookings with Thomas Cook have all been cancelled.

TV news reports have shown angry tourists all around the globe who were left in the dark till the very last minute, not knowing if they would have a flight home, and tearful members of staff who have lost their jobs.

The company’s demise will see the loss of all 21,000 jobs of those directly employed, with tens of thousands more in overseas resorts put at risk as many local businesses are unlikely to see the bills incurred by Thomas Cook being paid.

The knock-on effect of the company failure will be enormous, as it is very doubtful that “minor” creditors, such as 1,000 smaller foreign hotel companies in Europe said to be “largely dependent” on Thomas Cook, will get any money back. In Tunisia alone, the company owes hotels £53 million for stays in July and August—with staff employed on considerably lower wages compared to their European counterparts—facing the prospect of no pay cheque for months to come, or jobs going altogether if hotels close.

There are 150,000 UK-based tourists whose return flights with Thomas Cook have been cancelled and some 350,000 non-UK nationals stranded on its holiday packages abroad. Some 50,000 holidaymakers are stranded in Greece alone, with the head of Crete’s union of tour operators Michalis Vlatakis likening the collapse of Thomas Cook to a “7-magnitude earthquake,” saying the local tourism sector was now “waiting for the tsunami.” Some 140,000 German travellers are affected, and local subsidiaries have stopped selling holidays. The Turkish Hoteliers Federation warned that the impact could be devastating for those hotels contracting solely with Thomas Cook. In Spain, thousands of jobs are at stake in popular holiday destinations such as the Canary Islands and Balearics.

The fact that the Thomas Cook Group—which includes some 26 associated companies—has been placed into liquidation means that there will be no rescue—as the liquidators seek to sell off the company’s assets to meet its debts. As well as unpaid bills for those currently on holiday, and fuel and airport charges, the company was servicing £1.7 billion in unsustainable debt it took on through a series of mergers and acquisitions in previous years.

The UK government refused a last-minute appeal to provide just £150 million to enable the company, which had revenues of £9.5 billion in 2018 and assets of £2.1 billion, to continue operating. The funding asked for is far less than the cost of repatriation, with the UK operation alone estimated at £600 million in public funds, even before the human cost of such massive job losses is taken into account.

Conservative Prime Minister Boris Johnson opposed using state funds to enable the company to continue trading, saying this would create a “moral hazard” for other companies who might also seek funding. Such a “moral hazard” was never posed when it came to a Labour government, backed by the Tories, bailing out the banks to the tune of around a trillion pounds in public funds following the 2008 crisis.

The crisis at Thomas Cook was exacerbated when its lenders, including Royal Bank of Scotland—which was taken into public ownership at vast public expense after the 2008 crash—suddenly demanded the company increase its cash holdings to keep it going through the quieter winter period.

The liquidators waited until the dead of night before announcing the company’s closure to be sure they could impound as many of its aircraft as possible while on the ground. All 600 high street holiday shops in Britain have been closed.

While UK employees will receive only minimal state redundancy payments, many of those based overseas will likely receive nothing. The company’s UK retirement obligations amounting to £1.6 billion will be transferred to the state-run Pension Protection Fund (PPF). Under PPF regulations, those under retirement age suffer a 10 percent cut to their pensions, subject to a cap that means they are only guaranteed 50 percent of their entitlement.

While UK-based holidaymakers who booked packages may receive compensation under the industry’s insurance scheme, this will not apply to those who have only booked flights. Moreover, many of those based abroad who purchased holidays will not receive a penny. It is estimated there are 150,000 Thomas Cook customers in Germany who have paid for holidays they will now no longer be able to take. Since the German insurance scheme caps the total compensation at €110 million, this falls far short of the estimated €300-€400 million customers have already paid out for their holidays.

The company, founded in 1841 and said to be the world’s oldest travel operator, developed the concept of the “package holiday,” arranging travel, accommodation and sightseeing for a single price. The structure of the holiday and travel sector, which accounts for 10.5 percent of global GDP, is subject to constant change that industry experts said Thomas Cook failed to keep up with.

The rise of the low-cost airlines such as Ryanair that can offer cheap flights means the relative advantage holiday package operators enjoyed through bulk purchasing has been heavily eroded. Similarly, travellers can now seek out cheaper accommodation deals online. Moreover, its extensive shop presence on the high street meant Thomas Cook had high overheads not incurred by online competitors.

Another major factor impacting the travel industry, and UK-based firms like Thomas Cook in particular, is the continued uncertainty about Brexit, which has seen the value of the pound pushed down by some 20 percent. According to billionaire Richard Branson, whose companies also provide air travel and holidays, “All of the travel industry costs are in dollars—for example fuel maintenance and airplane leasing. With the weaker pound, the cost of everything has skyrocketed. For Thomas Cook, this has proved terminal.”

The number of travel company failures is escalating. In 2017, British-based Monarch Airlines collapsed suddenly, leaving 110,000 travellers facing days of chaos and 300,000 future bookings cancelled. The 2,750 Monarch employees lost their jobs, most of them in the UK. The same year also saw the failure of Italian national airline Alitalia and Germany’s second largest airline, Air Berlin.

In 2018, the Lithuania-based owners of the Small Planet Group of airlines announced it was seeking bankruptcy protection and closed its German, Cambodian and Polish operations.

The failure of Thomas Cook exemplifies the parasitic anti-social nature of the capitalist system. While tens of thousands of workers and those dependent upon it will pay through their lost jobs and incomes, those running the company into the ground were rewarded richly. Company CEO Peter Fankhauser has pocketed more than £8 million since taking the top job in 2014, with senior executives taking home more than £20 million over the past five years.

As Thomas Cook was in the throes of collapse, the vultures were circling. Some hedge funds engaged in a massive “shorting” operation, effectively betting on the company’s share price falling and earning themselves millions. Those involved included Whitebox Advisors, one of the firms that also made a killing by betting against the US sub-prime mortgage market before the financial crisis.

Hundreds of thousands of Thomas Cook customers had their holidays brought to a sudden end when the company was placed in compulsory liquidation in the early hours of Monday morning. The international scale of the crisis, with devastating economic and social implications, has rapidly become clear. The collapse means that the firm’s entire 22,000-strong global workforce have lost their jobs. Some 9,000 of these are employed in the UK, with 6,000 already laid off. The firm was headquartered in Manchester, with 3,000 previously employed in the region: here.