This 19 November 2018 video from the USA is called Big Pharma Is Price Gouging America.

Martin Shkreli is an ex-hedge fund millionaire from the USA. He was sentenced to seven years in prison for fraud.

Though Mr Shkreli knew nothing about pharmacy, he started a corporation called Turing Pharmaceuticals. Named after important British computer inventor Alan Turing. In spite of that promising sounding name, Shkreli’s business did not invent any medicine. It just gouged prices of existing medicine.

As this blog reported earlier:

Nothing better exposed the fact that Big Pharma are not altruistic companies working tirelessly for the health and wellbeing of the people of the world than the scandal that erupted in the US last year, when it was revealed that a company called Turing Pharmaceuticals had acquired the rights to a drug, called Daraprim, used to treat life-threatening infectious diseases – and that had been around for 62 years – and immediately raised the price of the drug from $13.50 a tablet to $750, an increase of over 5,000%.

The pharmaceutical company Mylan has been making headlines in 2016 in the USA for hiking the price of its life-saving EpiPen device by more than 450 percent. A report released June 2016, however, notes that the company has made similar price increases for a number of its drugs: here.

Mylan CEO’s salary soared by 671% as firm hiked EpiPen prices. The incident is just the latest in which a pharmaceutical firm has been accused of price-hiking: here. 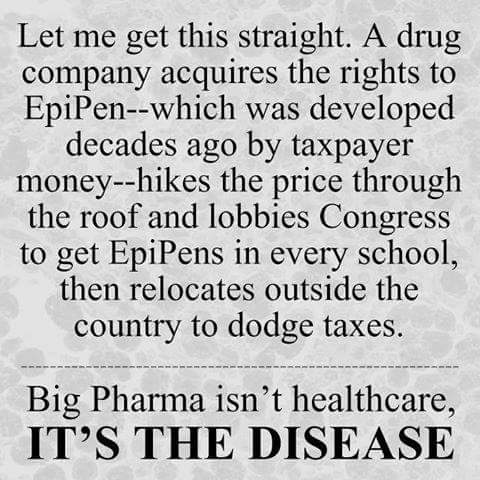 Not just Mylan stands accused of such practices. According to the attorney general of California, at least 39 Big Pharma corporations are.

And Novartis does not do price gouging just in the USA.

Again, a pharmaceutical company makes cunning use of the regulations on orphan drugs to make an existing drug six times more expensive. It is the cancer drug lutetium octreotate. This reports the Dutch Journal of Medicine (NTvG).

Erasmus University Medical Center [UMC] has been making the drug for almost twenty years for its patients in its own pharmacy. Cost: about 16,000 euros per course of four infusions. The UMC Utrecht and the Antoni van Leeuwenhoek hospital also charge the same amount for their own patients. Pharmaceutical corporation Novartis asks for more than 90,000 euros for a cure with its identical product Lutathera.

The drug was developed in the 1980s and 90s at Erasmus MC under the supervision of emeritus professor Eric Krenning. He has treated patients since the beginning of this century.

That status gives 10 years of exclusive rights to the sale of the product in the European Union and seven years in the United States. Orphan drugs are medicines against very rare diseases.

“We strongly feel that abuse is being made of the possibilities of raising the price”, says a spokesperson for health insurer CZ. “You might say that the rules are used in an unsympathetic way, but less nuancedly we simply call this cheating.”

Fellow health insurer VGZ says they are unable to explain “that cancer patients do not have access to a medicine that has been developed by the hospital itself, but is becoming unaffordable through the intervention of a pharmaceutical company that has not contributed to that development. It is perverse.”

… Novartis says that Lutathera’s price is based on its value for patients.

Yes, Messrs Novartis public relations department: the value for the patients is the difference between life and death. Very high value indeed. But, as for monetary value, the only value valued by your fat cat bosses: this Novartis price gouging may mean that a billionaire with cancer will live. While a cleaner with cancer will die.

According to Ayn Rand (inspiration for both Trump and for Shkreli)-Martin Shkreli-Donald Trump ‘logic’ that is capitalism and it’s fine. Why was that cleaner so stupid to become a cleaner instead of a billionaire? [sarcasm off]

Keeping on making it yourself

The health insurers want the hospitals involved to continue to produce lutetium octreotate. They are worried that this possibility will be jeopardized, because with the purchase of AAA, Novartis also became the owner of one of the only suppliers of lutetium that supplies raw material of sufficient quality to make medicines. If the hospitals involved can no longer make the medication themselves, then access to this highly effective medicine will become doubtful for about 125 patients annually.

Lutetium octreotate is used for the treatment of NET tumors. NET stands for neuroendocrine tumors. These are tumors in the system that regulate the release of hormones that control certain organs.