This 2014 video is called ANDEAN FLAMINGO MATING DANCE. It shows these birds in their natural environment in South America. 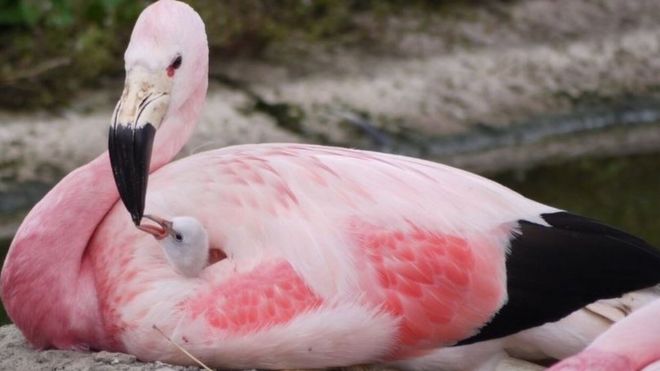 Flamingo chicks have been fostered by another species of the bird at Slimbridge Wetland Centre.

Three pairs of Andean flamingos at the Gloucestershire reserve were given eggs of their Chilean counterparts to nest.

The Andean flamingos had been prompted to lay eggs by the hot weather but the flock has been infertile for 19 years so were left chick-less once again.

All three chicks have hatched and staff say they are confident they will survive.

Experts at Slimbridge spotted that the recent high temperatures had prompted the Andean birds to start laying for the first time since 2003, but the eggs were not viable.

Their keepers decided that, as the Chilean flock was also laying multiple eggs, a foster program might help prompt fertility in the Andean group.

They gave six of the birds a handful of eggs to nest and hatch and now the young chicks are being raised by them.

One of the foster mums came from the last set of successful Andean chicks, raised in 1999.

“Flamingos are fickle breeders and can go years without nesting successfully”, they explained.

“There’s no doubt the recent heat has had the desired effect so with the Andeans in full parenting mode we gave them Chilean chicks to bring up as their own.

“Chilean flamingos are relatively similar to the Andean but they survive on different diets.”

Some of the Andean flamingos arrived at the centre in the 1960s and have been at the reserve longer than any staff.

Slimbridge is the only place in the world where all six species of flamingos can be seen.