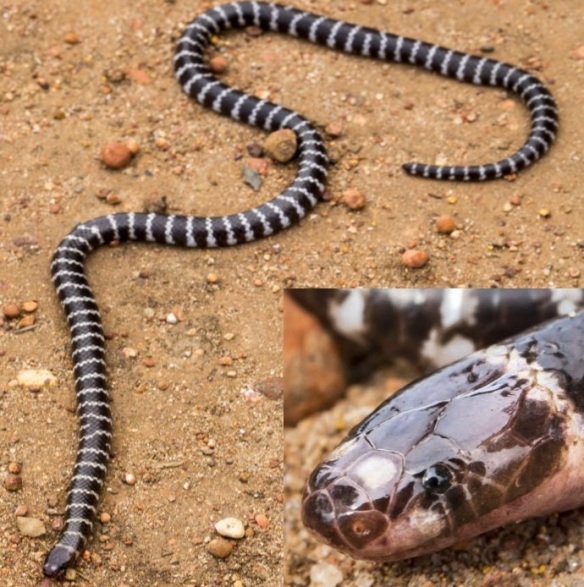 Bandy-bandies (genus Vermicella) are small (50–100cm) black and white burrowing elapids with a highly specialised diet of blindsnakes (Typhlopidae). There are currently 5 recognized species in the genus, all located in Australia, with Vermicella annulata the most encountered species with the largest distribution.

Morphological and mitochondrial analyses of specimens collected from the Weipa area, Cape York, Queensland reveal the existence of a new species, which we describe as Vermicella parscauda sp. nov.

Mitochondrial DNA analysis (16S and ND4) and external morphological characteristics indicate that the closest relatives of the new species are not V. annulata, which also occurs on Cape York, but rather species from Western Australia and the Northern Territory (V. intermedia and V. multifasciata) which, like V. parscauda, occupy monsoon habitats.

Internasal scales are present in V. parscauda sp. nov., similar to V. annulata, but V. intermedia and V. multifasciata do not have nasal scales. V. parscauda sp. nov. has 55–94 black dorsal bands and mottled or black ventral scales terminating approximately 2/3rds of the body into formed black rings, suggesting that hyper-banding is a characteristic of the tropical monsoon snakes (V. intermedia, V. multifasciata and V. parscauda). The confined locality, potential habitat disruption due to mining activities, and scarcity of specimens indicates an urgent conservation concern for this species.

The ink has not yet dried on a scientific paper describing a new species of snake, yet the reptile may already be in danger of extinction due to mining. A team of biologists discovered a new species of bandy-bandy snake at Weipa on the west coast of the Cape York Peninsula: here.