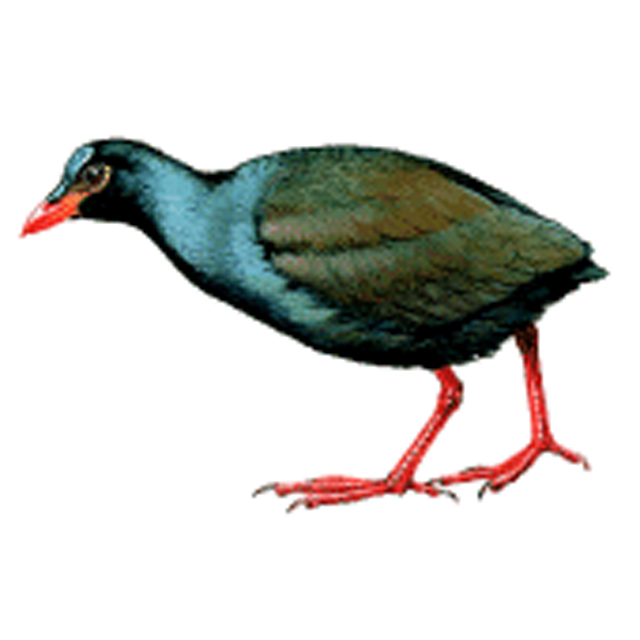 Search for the lost Makira Moorhen

Last recorded in 1953 but reported by hunters in more recent times, the elusive Makira Moorhen is thought unlikely to have gone extinct, although any remnant population is likely to be tiny.

A new search for it has been co-ordinated by Solomon Islands Community Conservation Partnership (a potential in-country partner for BirdLife) in conjunction with Mark O’Brien at BirdLife with support from the Critical Ecosystem Partnership Fund. 10 days of field work in August in the forests of East Makira, Solomon Islands, failed to produce any sightings of Makira Moorhen. However there were a couple of encouraging indications.

An interview with a local hunter provided plausible evidence of, and detailed description of, a bird that sounds like a Makira Moorhen being sighted, and killed, in East Makira less than 3 years previous. A second, rather more sketchy and less detailed story of a Makira Moorhen being sighted in 2011 was also relayed ot the team. These add to 3 other reports from hunters of birds in similarly wild, remote areas of the East Makira forest this century.

Camps were established at three separate locations during the fieldwork – the third of which was located in good quality native forest. Unfortunately, the weather deteriorated during the time at the third camp, making observations difficult. However, automatic cameras were set – and we are looking forward to checking any resulting images.

The survey team located a nest and single egg of a Yellow-legged Pigeon – a declining and globally-threatened (Vulnerable) pigeon. This species is considered to be rare wherever it occurs (it is restricted to the Solomon Islands and Bismarck Archipelago), except for Makira where it is classed as locally uncommon. The nest was found by Reuben Tako, a volunteer on the survey. Bizarrely, the only other nest found of this species, in 2001, was by Reuben’s father. Both nests were located on the ground. The continued presence of the Pigeon in the area might indicate that ground predators are not at a high density within the Makira forest – a conclusion that bodes well for the continued existence of a flightless ground-dwelling species, such as Makira Moorhen.

Reuben has retrieved the cameras and relocated them at another prime remote forest area. Accessing these forests and locating the cameras is, itself, a considerable task. Hopefully we will be able to repeat this exercise on another 3 or 4 occasions – check the images, not just for the Moorhen but also for any local undescribed native Solomys rats that are thought to be present, and also to develop an index of the number of introduced ground predators, such as rats, cats and pigs, that might be present in the forest. We will use the findings from the camera traps to identify a further site for a field trip later in the year.

The Critical Ecosystem Partnership Fund is a joint initiative of Conservation International, l’Agence Française de Développement, the Global Environment Facility, the Government of Japan, the MacArthur Foundation and the World Bank. A fundamental goal is to ensure civil society is engaged in biodiversity conservation.”

Six species we thought were extinct, but aren’t. These are termed ‘Lazarus’ species, after the biblical story in which Jesus raises Lazarus from the dead: here.

2 thoughts on “Makira moorhen of Solomon Islands, extinct or not?”