This video, recorded in Thailand, says about itself:

Macaques have learnt to use the sea low tide and rocks to their advantage in order to have a seafood banquet.

With shells disappearing because of tourists, hermit crabs in Thailand have turned to rubbish to solve their housing crisis. In Bangkok hundreds of people have taken to the streets to protest against the military regime in Thailand. They took action at the regional headquarters of the United Nations. The estimated 900 demonstrators want the regime to stop what they believe is intimidation of activists.

The demonstration is one of the biggest against the government in months. It is organized by the People’s Movement for a Just Society, a network that stands up for people who have lost their land because the government has expropriated it.

Protests against the junta are relatively special in Thailand because Thai people did not dare to demonstrate in recent years.

“Two years ago no one would have taken to the streets to demonstrate against it, but now the irritation about the junta has won the fear”, says correspondent Michel Maas. “These are not the first and certainly not the last demonstrations that will be held there.”

The army seized power in Thailand in 2014 and thus put an end to a protracted period of protests. The junta promised that free elections would be held, but they have been postponed several times, to the displeasure of the population. The elections are now scheduled for next year.

Maas thinks that the Thai protest movement will become bigger in the coming period.

The Thai election held on March 24 was a sham, engineered by the country’s military junta to try to give some legitimacy to its autocratic rule. After seizing power in 2014, the regime promised to hold an election the following year, but even after ramming through a new anti-democratic constitution in 2016, has repeatedly delayed any poll, fearing a voter backlash: here.

Nuhurhayati Masoe, 23, who hails from Thailand‘s Muslim-majority Yala province, was punished for publishing an excerpt from an article on the social media platform in October 2016. She heard the article through an audio application for blind people.

A court in Bangkok sentenced a young blind woman to a one-and-a-half-year prison sentence because she had shared a critical post about the monarchy on Facebook.

The lèse majesté laws are particularly harsh in Thailand. Violators can be sentenced to years of imprisonment.

The military in power

The 23-year-old woman had shared an article by royal family critic Giles Ungpakorn.

The woman has confessed that, but she did not expect that only sharing would cause such a severe punishment.

Since the military have been in power through a coup in 2014, more than a hundred people have received long penalties for lèse majesté.

This video from Thailand says about itself:

The self-proclaimed royalist Sulak Sivaraksa has faced at least three lèse majesté charges. The latest one filed against him at the age of 82 was brought by two retired generals who were not satisfied with Sulak’s speech on King Naresuan, a monarch who ruled Ayutthaya Kingdom about 400 years ago.

Now, things in Thailand are getting ‘curioser and curioser‘ as Alice used to say in Wonderland.

An 85-year-old Thai man may go to a prison cell for insulting a king who reigned 400 years ago. He appeared before the military court in Bangkok today and is accused of lèse majesté.

Sulak Sivaraksa three years ago in a speech at a university asked a question about what happened in 1593. He wondered if the story is true that at that time the Thai king Naresuan killed the Burmese crown prince in a personal duel on an elephant. This ‘battle of Nong Sarai’ is still commemorated every year.

Sulak, who has often expressed criticism about the rulers in Thailand, does not understand why he is still prosecuted for statements he made in 2014. “Maybe they do not like me because I never keep my mouth shut. I speak the truth. I have to be critical. That’s my job.”

People accused of lèse majesté in Thailand may be imprisoned between 3 and 15 years. There is nothing in the law about insulting dead kings, but according to Sivaraksa’s lawyer, it is just how someone interprets the law.

According to a human rights organization, since the army did a coup in Thailand in 2014, 138 people have been accused of lèse majesté.

What next? Will Theresa May in Britain now jail people for saying 16th century King of England Henry VIII had some of his wives beheaded (which is true), because Ms May wants ‘Henry VIII powers’ for herself?

This picture shows how Theresa May might look if she was Henry VIII, which she isn’t.

This 2015 French video, with English subtitles, asks itself whether French author Charles Perrault based his Bluebeard tale on King Henry VIII.

Five people accused by Thailand’s military junta of hoarding military weapons were charged on Thursday. The charges are a thinly veiled attempt to suppress political opposition and potentially to create a pretext for delaying or calling off elections promised for next year: here.

That was before the military dictatorship of Thailand intervened.

From the International Institute for Asian Studies (IIAS), Leiden, The Netherlands today:

International Statement in support of Dr. Chayan Vaddhanaphuti and colleagues

The recent 13th International Thai Studies Conference (ICTS) and the 10th International Convention of Asia Scholars were major international academic events each attended by around 1300 participants, from 37 countries (ICTS) and over 50 countries (ICAS) respectively, that brought a global presence of scholars to Thailand. These conferences enjoy high international prestige and produce work of impressive and lasting significance. Dr. Chayan was entrusted by his university to facilitate the organization of these two major events, both of which received official support from the Governor of the Province of Chiang Mai. Dr. Chayan’s organizational skills and intellectual leadership are celebrated worldwide, and were certainly in evidence on these occasions.

The presence of military officers at the ICAS conference apparently prompted some individuals to affirm that the conference was an academic forum and not a military barracks, a statement made in defense of the academic nature of the conference.

We are sure you will agree that Chiang Mai Convention and Exhibition Center is indeed not a military barracks. We believe that making this factual statement was a legitimate expression of their rights and liberties, as permitted under Article 4 of the 2017 Constitution; and one that in no way threatened Thailand’s peace and order.

We would therefore urge that all charges be dropped against Dr. Chayan and the other individuals named above, who clearly had no intention of violating any laws on political assemblage. Chiang Mai University and other universities in Thailand have hosted many international academic conferences, each important not only for the opportunities for scholars to share current research, but also for generating economic revenue for Chiang Mai and other hosting provinces. Holding such international conferences is a vital component if Thailand is to reach the stated goal in its “Thailand 4.0” plans of ensuring that at least 5 Thai universities are ranked among the world’s top 100 higher education institutions within the next 20 years. We hope, too, that Thailand will continue to welcome serious scholars of all disciplinary inclinations and to benefit from the global contributions of Thailand’s own most important academics – of whom, without question, Dr. Chayan is an outstanding representative.

Issued on behalf of the following:

Prosecutions have continued under Thailand’s new king Maha Vajiralongkorn, who took the throne in late 2016 after the death of his … father.

A Thai man was jailed for 35 years on Friday for Facebook posts deemed insulting to the royal family, a watchdog said, in one of the harshest sentences handed down for a crime that insulates Thailand’s ultra-rich monarchy from criticism.

A Bangkok military court convicted the 34-year-old of ten counts of lese majeste for posting photos and videos of the royal family.

In Thailand, a man has been sentenced to 35 years for insulting the royal house. A 34-year-old businessman according to a military court wrote unacceptable things on Facebook. It is the highest punishment ever for someone who is guilty of lese majeste.

Actually, the man would get 70 years in prison, but because he confessed, his punishment will be halved. Lese majeste in Thailand is punished with imprisonment from 3 to 15 years, but the man had committed the same crime several times.

Thailand has a history of severe punishment for lese majeste. For example, a Swiss man was convicted in 2007 when in a drunk mood he spilled paint on portraits of then King Bhumibol. Someone else was charged in 2015 because he was said to have offended Bhumibol’s dog.

King Bhumibol died in October 2016 and was seen as a strict enforcer of Article 112, the article that makes lese majeste a crime. Even after his death, there seems to be no less harsh punishment in Thailand for insulting the Royal House.

The military government of the country says that Article 112 is necessary for maintaining the monarchy and national security. Human rights organizations say that the law is in violation of international human rights agreements, because criticism is oppressed. 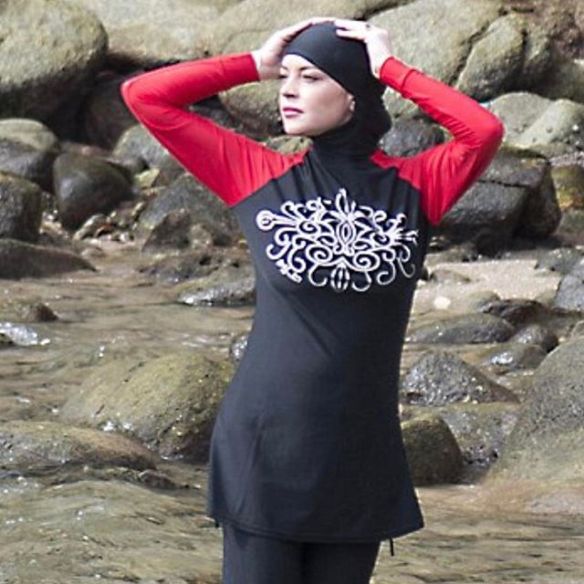 By Stephanie Marcus in the USA:

Not something we expected.

Lindsay Lohan has been vacationing in Phuket, Thailand, and wearing more clothing than one might expect.

The 30-year-old actress was spotted wearing a burkini before she went paddleboarding last week, according to The Daily Mail. The burkini was created in 2004 and allows Muslim women to uphold modesty traditions, though Australian designer Aheda Zanetti has said many non-Muslim women have bought the design as well.

‘Burkini’ is not really a good name for these full-body swimsuits:

1) They are very different from what Western corporate media call a ‘burqa’.

2) What Western corporate media call a ‘burqa’ is not a real burqa, but a chadari.

It’s unclear exactly why the “Mean Girls” actress chose to wear the burkini, though based on the photos, it did seem like she might be posing for some sort of photo shoot.

There is a vicious military dictatorship in Thailand. Banning everything from George Orwell’s novel 1984 to the New York Times. Arresting people for almost everything, from playing bridge to joking about the king’s dog to criticizing government corruption.

However, Thai police did not arrest Ms Lohan for wearing a ‘burkini’. Apparently, the dictatorial monarchy Thailand has not yet sunk to the level of officially democratic and republican France; where politicians ban ‘burkinis’ and armed policemen force women on beaches to undress for wearing ‘too many’ clothes.

Swimming is one of America’s greatest pastimes, but due to their visibility, Muslim women who wear a burkini face a huge risk of harassment. HuffPost spoke to over 30 Muslim women across the country who described a wide range of experiences swimming in America.