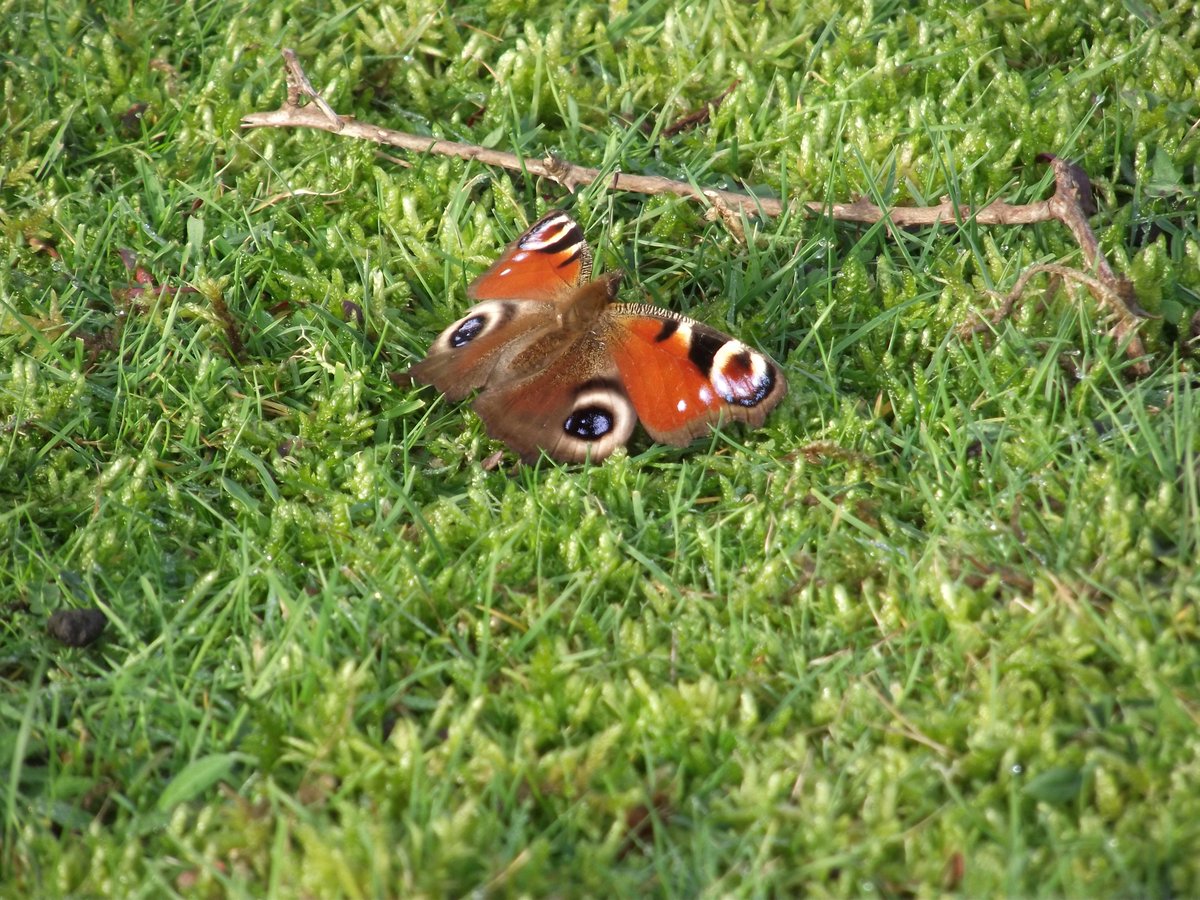 From RSPB Minsmere nature reserve in Suffolk in England; where not only birds have been seen today; on Twitter today:

Not one, but two butterflies seen today: painted lady in dunes & this peacock in North Bushes

Wars cause big damage to the environment and to wildlife.

However, sometimes some aspects of some wars have unintended beneficial side effects for some wildlife.

In 1942, the nazi German occupiers of the Netherlands built a military airbase near Havelte in Drenthe province. Allied warplanes bombed this base, resulting in thousands of bomb craters.

Many of these craters still exist today, now that the former military airport is a nature reserve. Some of them are filled with water: a good environment for the great crested newts living there now.

Taking a look at Terns 2: Roseate, Sandwich and Little Tern.

From the RSPB in Britain:

Little terns on Benacre beach on the Suffolk coast battled against the odds this summer to have their best breeding season for fifteen years, thanks to the dedication of local volunteers and team work.

The tiny rare seabird, which weighs no more than a tennis ball, faced terrible weather and lack of suitable food at the start of the season, yet despite this 116 pairs nested at Benacre and fledged around 180 chicks.

However, tough conditions early on in the season caused a number of little tern colonies to abandon. At Kessingland – usually a Suffolk stronghold for little terns, 60 nests were deserted.

Little terns travel over 11,000 miles each year, flying from their winter homes in West Africa to spend summer in a select few locations in the UK. The east coast is one of the last remaining strongholds for the little tern – with 30 per cent of the national population returning to the area each year to breed.

Thanks to recent funding from EU LIFE+, the RSPB and partners have been able to step up their efforts to protect coastal colonies in the east by investing in local volunteers and new wardens.

Jesse Timberlake, RSPB Little Tern Warden for Suffolk said: “It has been a season of highs and lows here in Suffolk for the little tern. With the sadness of seeing our Kessingland colony abandon early in June, and the excitement we felt watching over 200 of these amazing birds fishing, feeding and caring for their young at the Benacre site. Not only was this colony the largest in the county, but this was the highest number of fledglings produced in Suffolk for over fifteen years.

“A large part of this success was down to the working partnership between the many stakeholder organisations, the public, and most importantly the tireless effort of our volunteer team.

“Although there is still much to learn in the coming years, I think we can look back on this season with a sense of pride, and look towards 2016 with a feeling of optimism.”

Staff working for the LIFE funded Little Tern Project monitoring their breeding behaviour reported a complex season overall, with ups and downs recorded across England and Wales. The overall picture showed poor breeding numbers, due to the combination of bad weather and feeding conditions at the start of the season, as well as a decrease in the number of birds arriving in the first place.

Susan Rendell-Read, LIFE Project Manager commenting on the national picture said: “Although breeding numbers are down from last year and the five-year trend before that, a difficult season could have been a lot worse if it wasn’t for the hard work of the many rangers, wardens and volunteers on our national beaches protecting little terns”.

Working together, managing the needs of little terns alongside recreational coastal pursuits, project staff will continue to move forward with the recovery of the UK little tern population.

This is an aquatic warbler video from Biebrza in Poland.

From the Rare Bird Network in Britain, on Twitter today:

Special, to have this rare east European bird there.

While BBC Springwatch allows us a fascinating glimpse into the intimate details of the lives of breeding British wildlife for three weeks this spring, here at the RPSB a small group of volunteers has helped to produce their own series of films introducing some of the characters you might see on you TV, the places they live, the struggles they face and how they are being overcome.

Migration is one of nature’s great events. Here, Paul Green, assistant warden at RSPB Minsmere nature reserve, talks about the exciting return of our summer migrants, and the astonishing journeys they’ve made to get here.

Unfortunately many migrating birds are declining in numbers due to loss of habitat, decreased availability of food, and climate change, both here in their wintering grounds and the countries they pass through on migration. The RSPB’s Birds Without Borders project aims to improve the breeding success of some of our most rapidly declining summer visitors, ensure safe passage for birds on migration, and deliver sustainable conservation initiatives that provide benefits for both migrant birds and people. Find out more here.

This is smew video from Slimbridge, England.

From RSPB Minsmere in Suffolk, England on Twitter today:

Together Against Sizewell C (Tasc), Theberton and Eastbridge Action Group (Teag) and the B1122 Action Group have been launched in communities surrounding the nuclear site.

They recently staged a protest march along the B1122, the road which will be used by construction vehicles for the development.

Surrounding communities have been blighted for half a century by the presence of nuclear power stations.

Although Sizewell A is being de-commissioned, the life of Sizewell B is to be extended by 20 years until 2055.

Now work is to start on Sizewell C at a site near the small town of Leiston.

“This development will cause major destruction to an area of outstanding natural beauty, our coast and to sites of special scientific interest and must be stopped,” he said.

The Sizewell complex is owned by French state energy provider EDF, which bought British Energy in 2009.

Sizewell A was the site of a major radioactive spill in 2007 when an estimated 40,000 gallons of radioactive water leaked from a split pipe.

The leak failed to trigger automatic alarms, and was spotted only when a worker saw water on the floor of a laundry.

From the University of Southampton, in Britain:

A University of Southampton professor has carried out the most detailed analysis ever of the archaeological remains of the lost medieval town of Dunwich, dubbed ‘Britain’s Atlantis’.

Funded and supported by English Heritage, and using advanced underwater imaging techniques, the project led by Professor David Sear of Geography and Environment has produced the most accurate map to date of the town’s streets, boundaries and major buildings, and revealed new ruins on the seabed. Professor Sear worked with a team from the University’s GeoData Institute; the National Oceanography Centre, Southampton; Wessex Archaeology; and local divers from North Sea Recovery and Learn Scuba.

He comments, “Visibility under the water at Dunwich is very poor due to the muddy water. This has limited the exploration of the site.

“We have now dived on the site using high resolution DIDSON ™ acoustic imaging to examine the ruins on the seabed – a first use of this technology for non-wreck marine archaeology.

“DIDSON technology is rather like shining a torch onto the seabed, only using sound instead of light. The data produced helps us to not only see the ruins, but also understand more about how they interact with the tidal currents and sea bed.”

Peter Murphy, English Heritage’s coastal survey expert who is currently completing a national assessment of coastal heritage assets in England, says: “The loss of most of the medieval town of Dunwich over the last few hundred years – one of the most important English ports in the Middle Ages – is part of a long process that is likely to result in more losses in the future. Everyone was surprised, though, by how much of the eroded town still survives under the sea and is identifiable.

“Whilst we cannot stop the forces of nature, we can ensure what is significant is recorded and our knowledge and memory of a place doesn’t get lost forever. Professor Sear and his team have developed techniques that will be valuable to understanding submerged and eroded terrestrial sites elsewhere.”

Present day Dunwich is a village 14 miles south of Lowestoft in Suffolk, but it was once a thriving port – similar in size to 14th Century London. Extreme storms forced coastal erosion and flooding that have almost completely wiped out this once prosperous town over the past seven centuries. This process began in 1286 when a huge storm swept much of the settlement into the sea and silted up the Dunwich River. This storm was followed by a succession of others that silted up the harbour and squeezed the economic life out of the town, leading to its eventual demise as a major international port in the 15th Century. It now lies collapsed and in ruins in a watery grave, three to 10 metres below the surface of the sea, just off the present coastline.

The project to survey the underwater ruins of Dunwich, the world’s largest medieval underwater town site, began in 2008. Six additional ruins on the seabed and 74 potential archaeological sites on the seafloor have since been found. Combining all known archaeological data from the site, together with old charts and navigation guides to the coast, it has also led to the production of the most accurate and detailed map of the street layout and position of buildings, including the town’s eight churches. Findings highlights are:

* Identification of the limits of the town, which reveal it was a substantial urban centre occupying approximately 1.8 km2 – almost as large as the City of London
* Confirmation the town had a central area enclosed by a defensive, possibly Saxon earthwork, about 1km2
* The documentation of ten buildings of medieval Dunwich, within this enclosed area, including the location and probable ruins of Blackfriars Friary, St Peter’s, All Saint’s and St Nicholas Churches, and the Chapel of St Katherine
* Additional ruins which initial interpretation suggests are part of a large house, possibly the town hall
* Further evidence that suggests the northern area of the town was largely commercial, with wooden structures associated with the port
* The use of shoreline change analysis to predict where the coastline was located at the height of the town’s prosperity

Commenting on the significance of Dunwich, Professor Sear says: “It is a sobering example of the relentless force of nature on our island coastline. It starkly demonstrates how rapidly the coast can change, even when protected by its inhabitants.
“Global climate change has made coastal erosion a topical issue in the 21st Century, but Dunwich demonstrates that it has happened before. The severe storms of the 13th and 14th Centuries coincided with a period of climate change, turning the warmer medieval climatic optimum into what we call the Little Ice Age.

“Our coastlines have always been changing, and communities have struggled to live with this change. Dunwich reminds us that it is not only the big storms and their frequency – coming one after another, that drives erosion and flooding, but also the social and economic decisions communities make at the coast. In the end, with the harbour silting up, the town partly destroyed, and falling market incomes, many people simply gave up on Dunwich.”

A new breed of archaeologists is using satellite imagery to unearth clues about past civilisations: here.