Our plane departed from Chengdu airport. 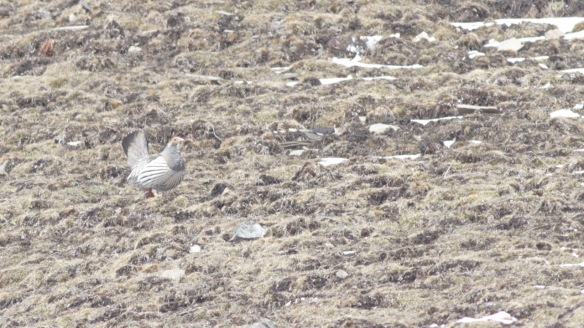 After what we saw earlier that day, still 8 April 2018 in the mountains above Wolong in Sichuan, China. We saw a Tibetan snowcock. First flying, then it landed, as the photo shows.

The snowcock walked towards a snowy patch.

We saw some of many Tibetan Buddhist prayer flags of Balang mountain (Balangla in Tibetan). 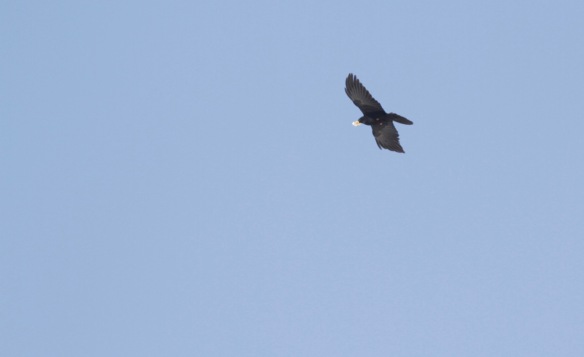 Then, a bearded vulture flying with a bone in its bill. It dropped the bone on a slope to crush it and to be able to eat the marrow. Probably it was a young vulture which still had to learn, as the bone fell on a patch where plants grew, not on hard rock which is better at breaking dropped bones.

We arrived at a mountain pass where we could again see many prayer flags and much snow.

There was a beautiful view of mountains and valleys. 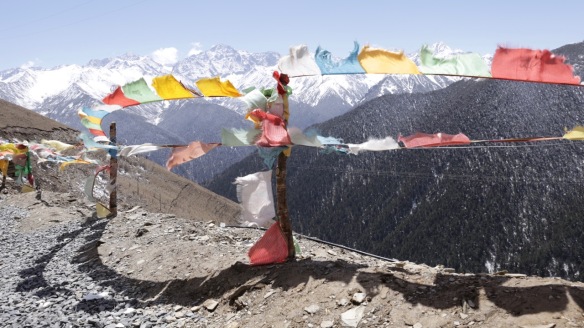 Time to say goodbye to the prayer flags and to the snow.

8 April 2018 was our last day of seeing birds in China. In the late afternoon and evening we went back to Chengdu. On 9 April from Chengdu airport our plane took us out of China.

After 7 April 2018 came 8 April 2018. We were in the Wolong Balangshan mountains in China. This is a BBC video about Temminck’s tragopan. A bird species which we might have seen there, but did not see.

This video is about another animal species which we might have seen, but didn’t. 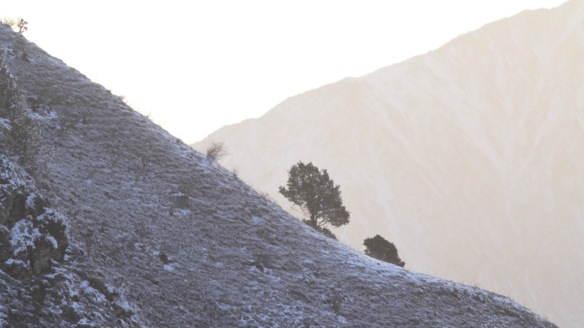 The higher we went, the more snow we saw.

Not only on the mountain tops further away …

Then, on a slope above us, a beautiful male Chinese monal. 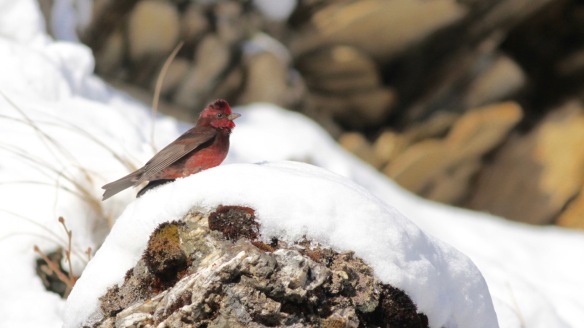 A bit further, in the snow, this male dark-breasted rosefinch.

We saw this plain mountain-finch.

A bit further, this Alpine accentor.

Stay tuned, as there will be more on the birds of the mountains above Wolong!

This 2011 video is called Pandamonium 🙂 at the Bifengxia Panda Reserve in Chengdu, China.

Join Animal Planet for Pandamonium, a brand new series that lets us experience the incredible lives of the giant pandas of the Wolong Panda Reserve in China.

The centre is now opening up its remarkable work to the world, giving us the chance to meet the dedicated team that works tirelessly to ensure the survival of this highly endangered species.

Pandas can have a hard time starting a family, so extraordinary efforts are being made to help them breed, using artificial insemination as well as encouraging natural mating.

Watch as tiny panda cubs are born and follow their progress. Each birth is vital to the survival of the species and often hits the headlines around the globe. Thanks to the pioneering research of their scientists, the Wolong Centre has brought 16 cubs into the world over the past year.

But what will the future hold for these unique and lovable black and white bears?

Very soon after this video was recorded, there was the catastrophic May 12, 2008 Sichuan earthquake; which hit the Wolong Panda Reserve and its surroundings particularly hard.

A brief but touching documentary of the damage done to the Wolong Reserve in China after the devastating earthquake of May 2008.

The panda reserve had to move to Gengda, 23 kilometers away.

This January 2013 video is called Crew travels up the long, bumpy road from Chengdu to Wolong.

Though there has been reconstruction at Wolong village, there are still ruins from the 2008 earthquake.

This is a 2007 video about the bridge at Wolong village. The bridge and the river are still there.

After arriving in Wolong from our journey from Chengdu on 7 April 2018, we walked to the bridge at 17:25.

There were rosy pipits there.

This is a 2012 video about a rosy pipit (at one point disturbed by a yellow wagtail).

Then, we saw a blue-fronted redstart.

This is a 2016 blue-fronted redstart video from Thailand.

A rufous-breasted accentor in Wolong.

This is a 2014 rufous-breasted accentor video.

We saw a Daurian redstart in Wolong too.

And its relative, a white-capped water redstart.

This is a 2015 white-capped water redstart video from Thailand.

This is a 2013 brown-breasted bulbul video from Thailand.

We walked along the pond, which used to be part of the panda sanctuary before the 2008 earthquake. Now, there are many pondskaters.

Stay tuned, as there will be more: on the mountains above Wolong and their wildlife!

That day we went from Yangxian to Wolong. Wolong is in Ngawa Tibetan and Qiang Autonomous Prefecture in Sichuan province in China. Roughly 57% of people living in that region are Tibetan. 20% Han Chinese, and 20% Qiang, a nationality with mostly a polytheist religion.

First, by bullet train to Chengdu. Then, from Chengdu to Wolong by bus.

We stopped in Dujiangyan city. There was a flower exhibit in front of a shopping centre there. 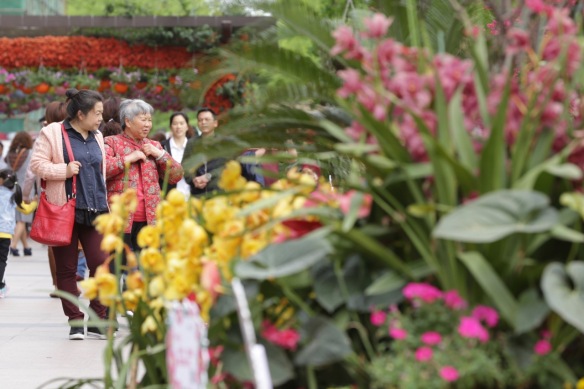 Many people stopped to watch the flowers. 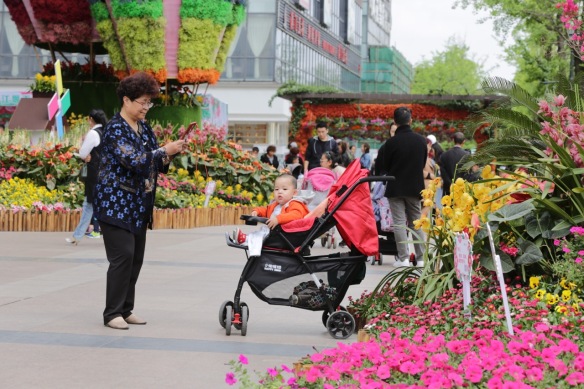 We were not the only ones photographing the flowers and people. 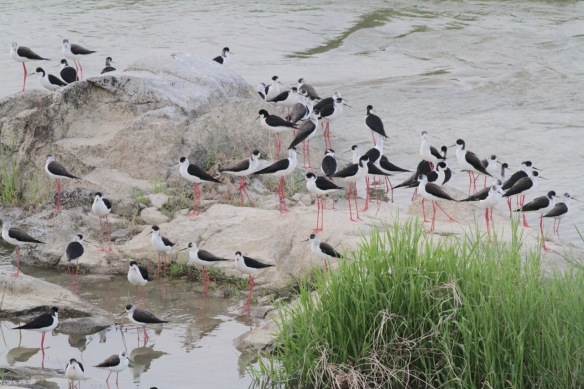 Still 6 April 2018 in Shaanxi, China. After we had seen the ibisbills and mandarin ducks, we continued along the river. There, we saw this beautiful group of at least forty black-winged stilts. Both adults and juveniles; both males and females.

They were there probably to spend the night, as the evening dusk was approaching fast; as this photo shows.

This 2010 video says about itself:

Still 6 April 2018 in Shaanxi province in China. After the birds we saw in the morning, in the afternoon we went in search of this rare species, the ibisbill.

We looked at a river bank, where the ibisbill may live. We did not see it, though we did see sixteen black-winged stilts. 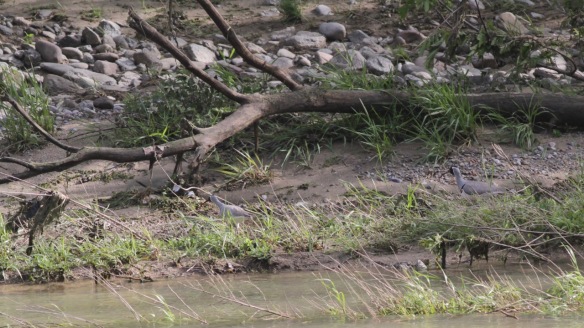 On this photo, a grey wagtail to the right of the ibisbill. 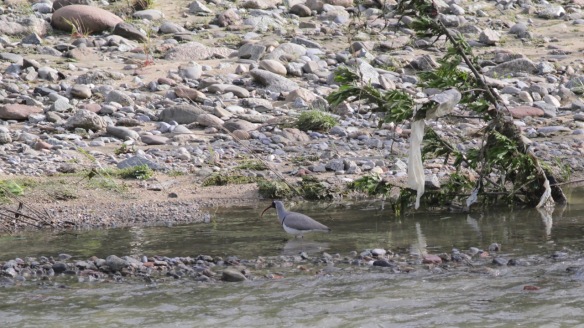 They were feeding and cleaning their feathers.

We saw five mandarin ducks as well, both males and females. This male was on the opposite river bank. 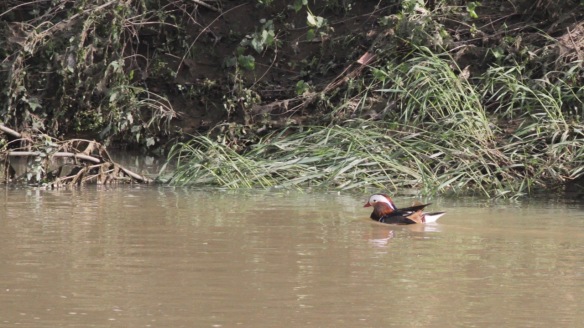 Stay tuned, there will be more on birds in China!

Like in my earlier blog post, still in the Han Shui river region in Shaanxi province in China. As we walked around a village, we saw this Daurian redstart. 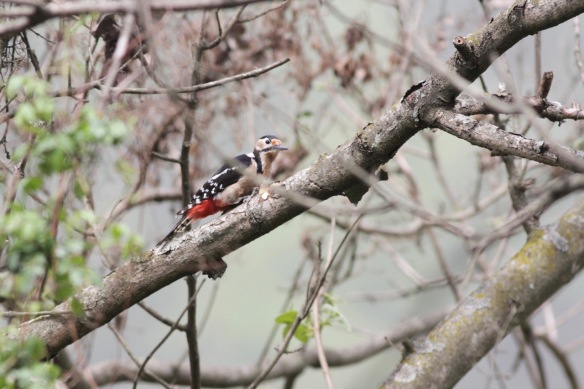 A bit further, this Darjeeling woodpecker on a tree. 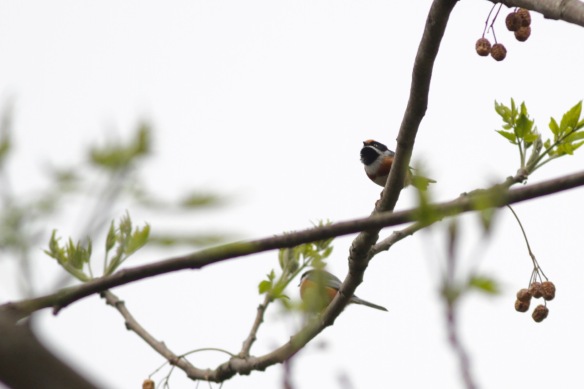 We continued, to a valley, where there was a common pheasant and these Wisteria flowers.

We arrived back in Hanzhong city. On a taxi there, this crested ibis picture.

Stay tuned; there will be more on birds in China!

Still 6 April 2018. Still in the Han Shui river region in Shaanxi province in China; like in the previous blog post. Where this little egret flew.

We passed a crested ibis nest. 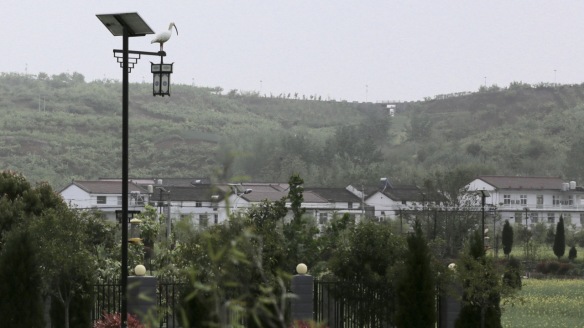 There was a crested ibis sculpture on this solar panel powered lamppost.

We arrived at a village. 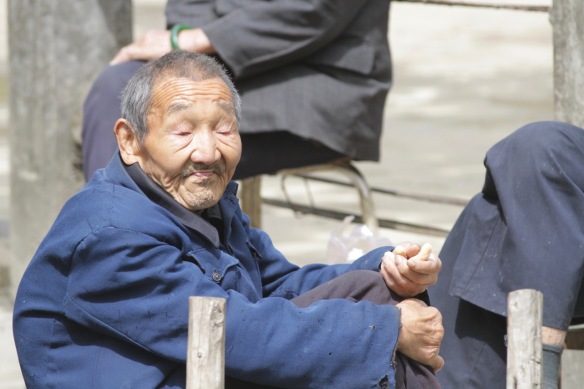 The village bench attracted people who wanted to sit.

And the village yellow flowers attracted this butterfly.

In a woodland, this grey-capped pigmy woodpecker couple.

Stay tuned: there will be more Chinese birds!

Still 6 April 2018. Like in my earlier blog post, along the Hanshui river in Shaanxi province in China. Where we saw this grey-capped greenfinch. 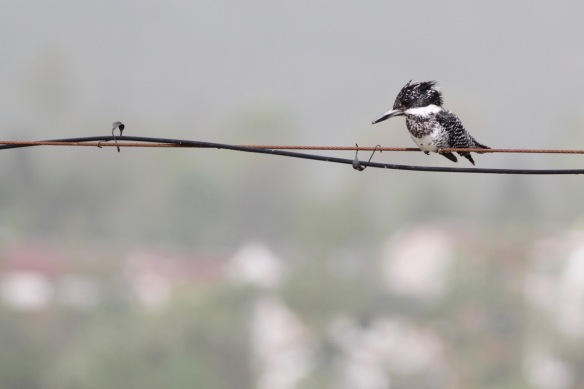 On a wire across the river, this crested kingfisher. 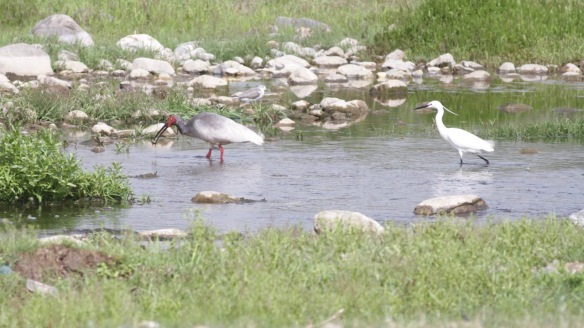 A bit further, a little egret and a crested ibis. The ibis had caught a prey. The crested ibis has recovered from only 7 birds left to about 2,000-2,500 individuals. 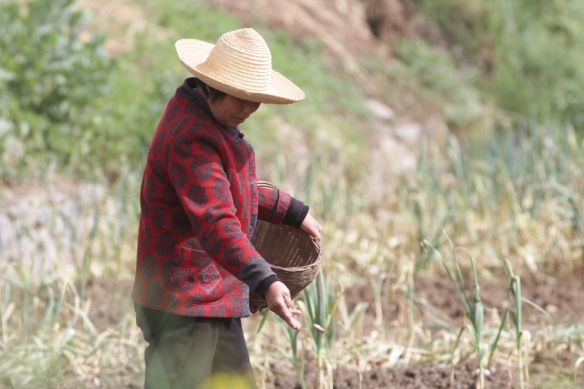 We passed a farm couple sowing for spring.

Then, this crested ibis in a tree.

In a small tree at a village entrance, this small bird: a black-throated tit.