This 4 November 2018 video says about itself:

Ancient Mesopotamia proved that fertile land and the knowledge to cultivate it was a fortuitous recipe for wealth and civilization. Learn how this “land between two rivers” became the birthplace of the world’s first cities, advancements in math and science, and the earliest evidence of literacy and a legal system.

This 20 November 2017 video from the National Museum of Antiquities in Leiden in the Netherlands is about their new exhibition. It is about Nineveh, the capital of the ancient Assyrian empire; which about 700 BC was the biggest city in the world. 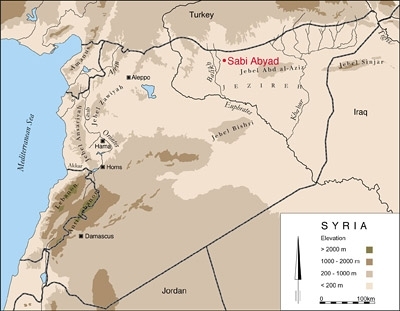 Assyrians were more ‘homely’ than we thought

The Assyrian Empire (ca. 2000 to 609 BC) was highly successful. At its height, it stretched from Turkey to Egypt and the Persian Gulf. Historians have wondered for a long time how the Assyrians were able to maintain power over such a huge region.

Research by PhD candidate Victor Klinkenberg has now provided an answer to part of this question. He has shown that Assyrian dominance was by no means always secured by using violence and brute force. Klinkenberg drew this conclusion after studying the settlement at Tell Sabi Abyad in present-day northern Syria. ‘This village was inhabited around 1200 BC,’ Klinkenberg explained. ‘The Assyrians founded the settlement when they conquered the region, so you’d expect it to be mainly a military outpost, ruled from above. But that doesn’t seem to be the case.’

Kinkenberg found that the rooms and houses of Tell Sabi Abyad had many different functions, and that they changed frequently. At one time it was a café where visitors drank beer, and at another time it was a rubbish tip. Klinkenberg: ‘All this shows that social life played a much greater role than military life. Apparently, positive stimuli and local stability were important factors in the Assyrians’ imperial activities.’

Klinkenberg’s research is part of a larger project headed by lecturer Bleda Düring, financed with a subsidy from the European Research Council (ERC). In recent years, the work of the Leiden researchers has been severely hindered by the rise of the Islamic State [ISIS] terror movement. Tell Sabi Abyad is around 80 km from Raqqa, the capital of the IS [ISIS]caliphate.

It was impossible for Klinkenberg to travel to the settlement. ‘In the past five years, nobody from our team has visited the excavations,’ he explained. ‘We did hear recently that a lot of archaeological finds have been destroyed or stolen. That’s such a waste, particularly as most of the remnants have no financial value. They’re worth absolutely nothing on the black market, but their value to science is enormous.’

Fortunately, all the earlier excavations at Tell Sabi Abyad have been carefully documented. ‘The project has been running for 35 years. The ground area is photographed every season; the location of the finds is mapped and buildings and rooms are measured. These measures meant that I could do my research at a distance.’ Like every other archaeologist, Klinkenberg would have preferred to visit the site in person. ‘But that’s a minor inconvenience compared to the suffering of the Syrian people.’

University of Tübingen archaeologists headed by Professor Peter Pfälzner have made sensational finds in the Kurdistan region of northern Iraq. The researchers from the Institute for Ancient Near Eastern Studies found a cuneiform archive of 93 clay tablets dating from 1250 BCE — the period of the Middle Assyrian Empire. What the tablets record remains a mystery for the time being. The researchers will have to decipher them — a long and difficult task: here.

The Assyrian Genocide (also known as Sayfo or Seyfo) refers to the mass slaughter of the Assyrian/Chaldean/Syriac population of the Ottoman Empire during the First World War. The Assyrian population of northern Mesopotamia (the Tur Abdin, Hakkari, Van, Siirt regions of present-day southeastern Turkey and the Urmia region of northwestern Iran) was forcibly relocated and massacred by Ottoman (Turkish) forces between 1914 and 1920. Estimates on the overall death toll have varied. Contemporary reports placed the figure at 270,000, although recent estimates have revised that figure to as many as 500–750,000.

These two videos are the sequels.

From The Local in Sweden:

The Turkish embassy in Stockholm tried to bring pressure to bear over a TV4 documentary, according to the station’s programme director, Viveka Hansson.

Hansson, in a statement on the TV4 website, said that she had been sent an e-mail by Arif Gulen, the press officer at the Turkish embassy, asking her to “reconsider the decision” to broadcast a documentary tonight about the slaughter by the Ottoman Empire of Christian Assyrians that occurred during the First World War.

Turkey has long rejected claims that the killing of some 275,000 Assyrians should be classified as a genocide. The mass killing, called Seyfo by Assyrians, is designated as a genocide by the International Association of Genocide Scholars.

Hansson dismissed the request out of hand.

“We can never accept this. We will protest against any attempt to exert pressure that threatens freedom of expression,” Hansson said.

Ancient warriors could have suffered from Post-Traumatic Stress Disorder (PTSD) as far back as 1300 BC, according to new research.

It had been thought that the first record of PTSD was in 490 BC, during the Greco-Persian Battle of Marathon, but researchers at Anglia Ruskin University have found that it could have existed more than 3,000 years ago.

Evidence was discovered of trauma suffered by warriors in Mesopotamia, or modern-day Iraq, under the Assyrian Dynasty, which ruled from 1300-609 BC.

Texts from the period refer to how King Elam’s mind “changed”,

This is a mistake by the Independent. The paper does not mention a ‘King Elam’, but a king of Elam. Elam was a rival kingdom to Assyria.

meaning that he was disturbed, or suffering from PTSD. Soldiers in Assyria were required to fight in battles every third year of their compulsory military service and this is believed to be the cause of the condition.

The paper states that while modern technology has increased the effectiveness and types of weaponry, “ancient soldiers facing the risk of injury and death must have been just as terrified of hardened and sharpened swords, showers of sling-stones or iron-hardened tips of arrows and fire arrows.”

It added: “The risk of death and the witnessing of the death of fellow soldiers appears to have been a major source of psychological trauma.

“Moreover, the chance of death from injuries, which can nowadays be surgically treated, must have been much greater in those days. All these factors contributed to post-traumatic or other psychiatric stress disorders resulting from the experience on the ancient battlefield.”

Professor Jamie Hacker Hughes, director of the Veterans and Families Institute at the university and co-author of the paper, said that the research shows that PTSD was first witnessed far earlier than previously thought.

“This paper, and the research on which it is based, demonstrates that post traumatic psychological symptoms of battle were evident in ancient Mesopotamia. Well before the Greek and Roman eras, before the time of Abraham and the biblical Kings, David and Solomon, and contemporarily with the time of the Pharaohs,” he said.

“Especially significant is that this evidence comes from the area known as the cradle of civilisation and, of course, the site of much recent conflict including the recent Gulf and Iraq Wars in which many British service personnel were involved.”

The paper is entitled “Nothing New Under the Sun: Post-Traumatic Stress Disorders in the Ancient World” and was co-authored with Dr Walid Abdul-Hamid of Queen Mary University of London.

This video is called Assyrian Lion Hunt at the British Museum.

(Aug. 11, 2009) — Excavations led by a University of Toronto archaeologist at the site of a recently discovered temple in southeastern Turkey have uncovered a cache of cuneiform tablets dating back to the Iron Age period between 1200 and 600 BCE. Found in the temple’s cella, or ‘holy of holies’, the tablets are part of a possible archive that may provide insights into Assyrian imperial aspirations.

The assemblage appears to represent a Neo-Assyrian renovation of an older Neo-Hittite temple complex, providing a rare glimpse into the religious dimension of Assyrian imperial ideology,” says Timothy Harrison, professor of near eastern archaeology in the Department of Near & Middle Eastern Civilizations and director of U of T’s Tayinat Archaeological Project (TAP). “The tablets, and the information they contain, may possibly highlight the imperial ambitions of one of the great powers of the ancient world, and its lasting influence on the political culture of the Middle East.” The cella also contained gold, bronze and iron implements, libation vessels and ornately decorated ritual objects.

Partially uncovered in 2008 at Tell Tayinat, capital of the Neo-Hittite Kingdom of Palastin, the structure of the building where the tablets were found preserves the classic plan of a Neo-Hittite temple. It formed part of a sacred precinct that once included monumental stelae carved in Luwian (an extinct Anatolian language once spoken in Turkey) hieroglyphic script, but which were found by the expedition smashed into tiny shard-like fragments.

“Tayinat was destroyed by the Assyrian king Tiglath-pileser III in 738 BCE, and then transformed into an Assyrian provincial capital, equipped with its own governor and imperial administration,” says Harrison. “Scholars have long speculated that the reference to Calneh in Isaiah’s oracle against Assyria alludes to Tiglath-pileser’s devastation of Kunulua – ie, Tayinat. The destruction of the Luwian monuments and conversion of the sacred precinct into an Assyrian religious complex may represent the physical manifestation of this historic event.”

The temple was later burned in an intense fire and found filled with heavily charred brick and wood which, ironically, contributed to the preservation of the finds recovered from its inner chambers. “While those responsible for this later destruction are not yet known, the remarkable discoveries preserved in the Tayinat temple clearly record a pivotal moment in its history,” says Harrison. “They promise a richly textured view of the cultural and ethnic contest that has long characterized the turbulent history of this region.”

Meticulous ancient notetakers have given archaeologists a glimpse of what life was like 3,000 years ago in the Assyrian Empire, which controlled much of the region between the Mediterranean Sea and the Persian Gulf: here.

International scholars announced the completion of the Chicago Assyrian Dictionary today – 90 years after the project was begun: here.