In December, 1944, 400 men of the 1rst British Airborne Division paraded at Buckingham Palace to receive their grateful thanks from their king and countrymen. Although they paraded as heroes, victors they were not. They were some of the survivors of a whole airborne division of over 10,000 men lost during the … battles of Operation Market Garden; Arnhem.

The municipality of Arnhem sent four British war veterans away last night at the commemoration on Airborneplein square. There was no more space in the VIP room.

“With great sorrow we turned around and returned to our hotel,” says 96-year-old naval veteran Simeon Mayou to Omroep Gelderland broadcasting organisation.

Arnhem mayor Ahmed Marcouch says he wants to find out what went wrong. “If we missed veterans, then I want to make up for this as quickly as possible.”

This year it is exactly 75 years ago that Operation Market Garden started. The commemoration is set up in a grand way and visitors to special ceremonies (such as the memorial last night) must show an admission ticket. The four denied British war veterans of the 1944 Alliance Normandy-Market Garden did not have these tickets.

“We have been around here since the early 1980s and have never needed a pass. We thought our medals served as entry tickets”, said 95-year-old veteran Leslie Reeds.

Reeds fought in Nijmegen and Arnhem. When he crossed the Rhine, he was seriously injured. He was the only survivor of his tank unit. Today, Reeds still has a metal plate in its head. “It is downright embarrassing that they sent us away. I will never experience such a special occasion again”, said Reeds.

In their wheelchairs, the four veterans went to the special VIP room for veterans, wreath-layers and other guests last night. Upon arrival they were told that they were not allowed to continue. “Every year we look forward to the celebration. We save the whole year to gather the money for the trip to the Netherlands,” said marine veteran Simeon Mayou (96), who was also sent back.

He added bitterly: “There were people let in who were not even born during the war. But we were not allowed in. Our hearts broke.”

So, it looks like governmental, Big Bureaucracy and Big Business sponsors, mostly born after the 1944 battle, were considered to be ‘more important’ than veterans.

The other two refused war veterans have a similar story. By the way, they could eventually attend the commemoration in the VIP room. A Dutch couple who saw up close how the British were being refused gave the two their admission tickets. Those cards were personal, but the security turned a blind eye and let them through.

The municipality of Arnhem regrets the course of events. But spokesman Carlo van der Borgt says: the maximum number of places was already filled. “This year the commemoration was of course bigger than usual. We had to deal with a limited number of places in the Berenkuil (Airborneplein, ed.). Only for invited guests.”

According to him, all Arnhem veterans were invited and placed on a special list. Veterans without an invitation could use an extra space, right next to the Berenkuil. “That place was well filled,” says Van der Borgt.

The veterans indicate that they have been referred to that location, but that it was also full. “We really couldn’t reach it anymore,” says Kees de Vries, spokesperson for the veterans. “That is very unfortunate,” says Van der Borgt. “But if you have so many people, it becomes difficult. … ”

Arnhem mayor Marcouch is shocked on Facebook. “How bad. Our commemoration is all about our beloved veterans who come to honour their deceased friends with us. I do everything to get them all in, safely and with all respect. So now I will find out if we have missed some veterans and if so, then of course I want to make up for this as quickly as possible.”

This 7 August 2018 video from Arnhem city in the Netherlands is about hornets at their nest.

Everdien van der Bijl made this video from a distance, with a 500mm telephoto lens. Hornets are not the most aggressive wasp species. But if you come too close to their nest, they will sting. Their stings are more painful than those of smaller wasp species.

This video about the second world war is called Nazi Collaborators – Season 1 Episode 10 ”The Dutch Collaborators”.

In 1971 the extreme right Nederlandse Volks-Unie party was founded with as its main aim rehabilitation of Dutch nazi criminals who had collaborated with Hitler.

Dutch daily De Gelderlander of 28 December 2017 reports on the local elections which will be on 21 March 2018.

In Arnhem city, one of the participant parties will be the neonazi Nederlandse Volks-Unie (NVU). Earlier this year, they demonstrated jointly with their fellow xenophobe Geert Wilders of the PVV party against the new, Moroccan Dutch, mayor of Arnhem.

The NVU election platform says they want to make it illegal to speak foreign languages. There will be an exception for tourists, they say. And usually, xenophobes of this type also don’t mind if bosses of multinational corporations from the USA, Japan or Germany don’t speak Dutch after years in the Netherlands. This linguistic bigotry is against working class people.

Another NVU election platform plank is changing the name of the Nelson Mandela bridge to Willem Alexander bridge, after the king of the Netherlands. The NVU considers the first South African president after the end of apartheid ‘a communist terrorist’. Already in the 1970s, when they were founded, they supported white supremacy in South Africa.

This 2016 cartoon shows European Donald Trump fans; from left to right, Marine Le Pen, leader of the French neo-fascist National Front party; Geert Wilders, a good friend of Ms Le Pen and leader of the xenophobic PVV party; and Frauke Petry. Frauke Petry was leader of the German extreme right AfD party, but has meanwhile been kicked out as the party thought even she was not racist enough.

Recently, a committee of all political parties represented in the local council of Arnhem city in the Netherlands decided that they wanted ex-MP Ahmed Marcouch as new mayor.

Mr Marcouch is of Moroccan ancestry.

Among the participants in Wilders‘ demonstration were members of the Nederlandse Volks-Unie (NVU). This neonazi party commemorates Adolf Hitler’s failed 1923 Munich beer hall putsch. They lay flowers on the grave of Peter Ton, a Dutch nazi paramilitary thug, killed in 1940 when Hitler occupied the Netherlands. They lay flowers on the grave of Mrs Florentine Rost van Tonningen, the widow of the leader in parliament of the Dutch NSB nazis, and herself a neonazi until her death. 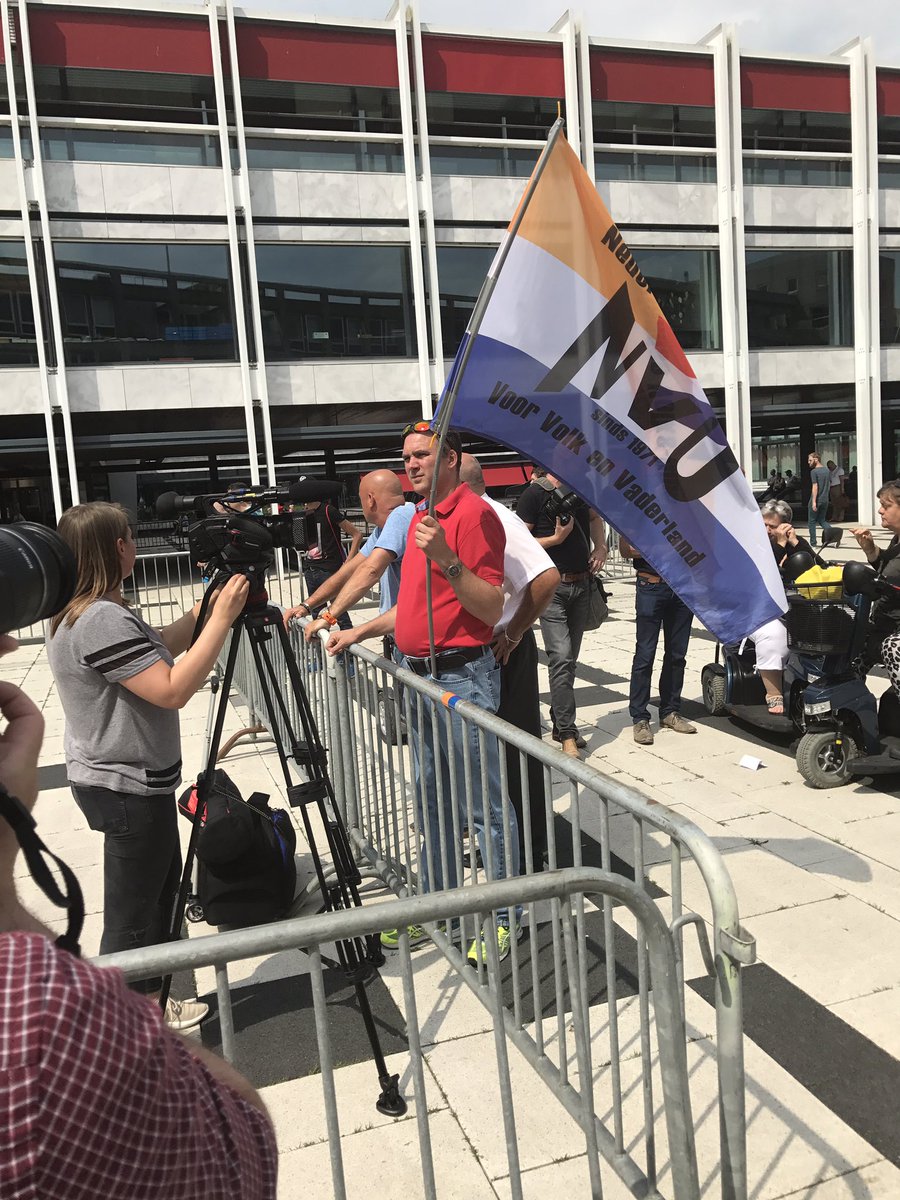 Also participating in Wilders’ anti-Moroccan demonstration were members of Pegida, an Islamophobic organisation of which the German leader Bachmann is an Adolf Hitler copycat. 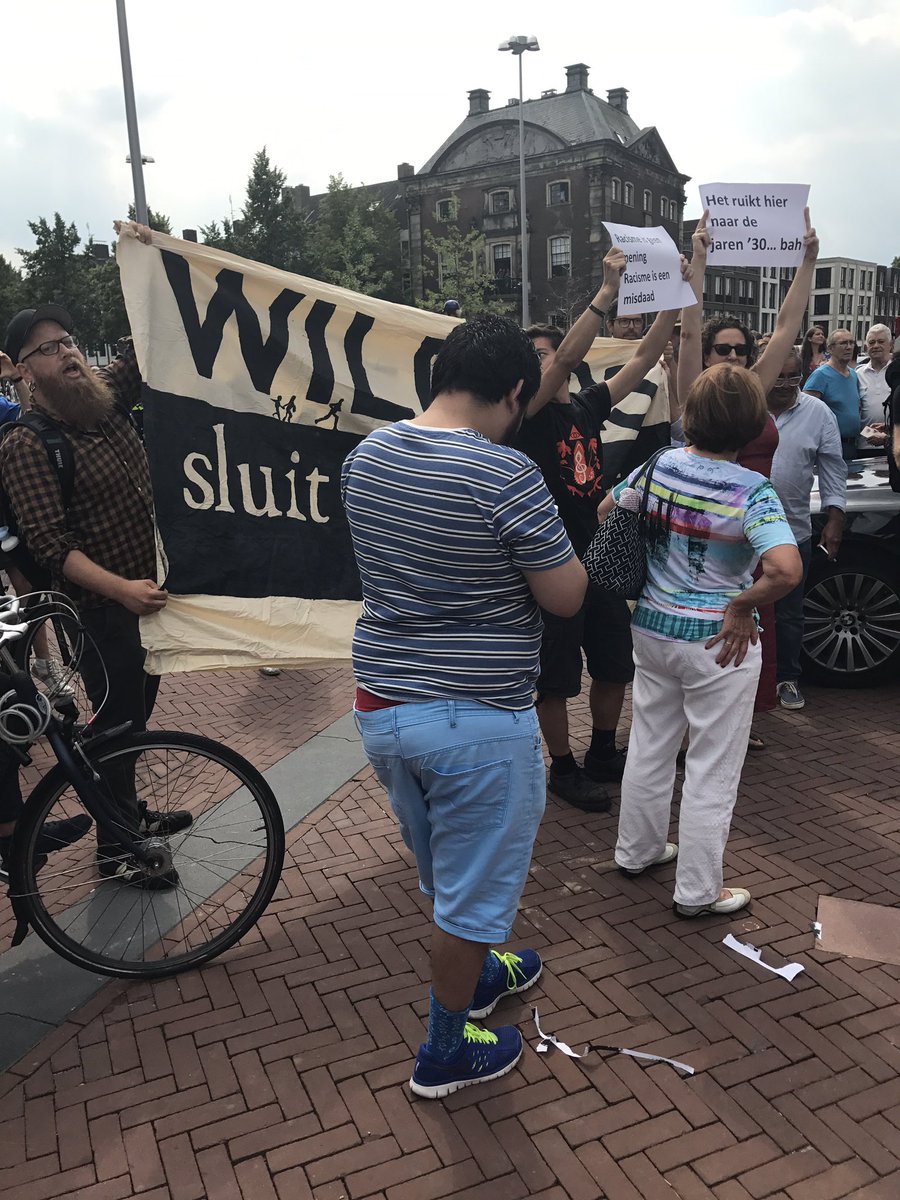 Many anti-racists were present to protest against the Wilders-NVU-Pegida rally.

The banner on the left of this photo says Wilders excludes. The sign on the right says: This smells like the 1930s … bah! 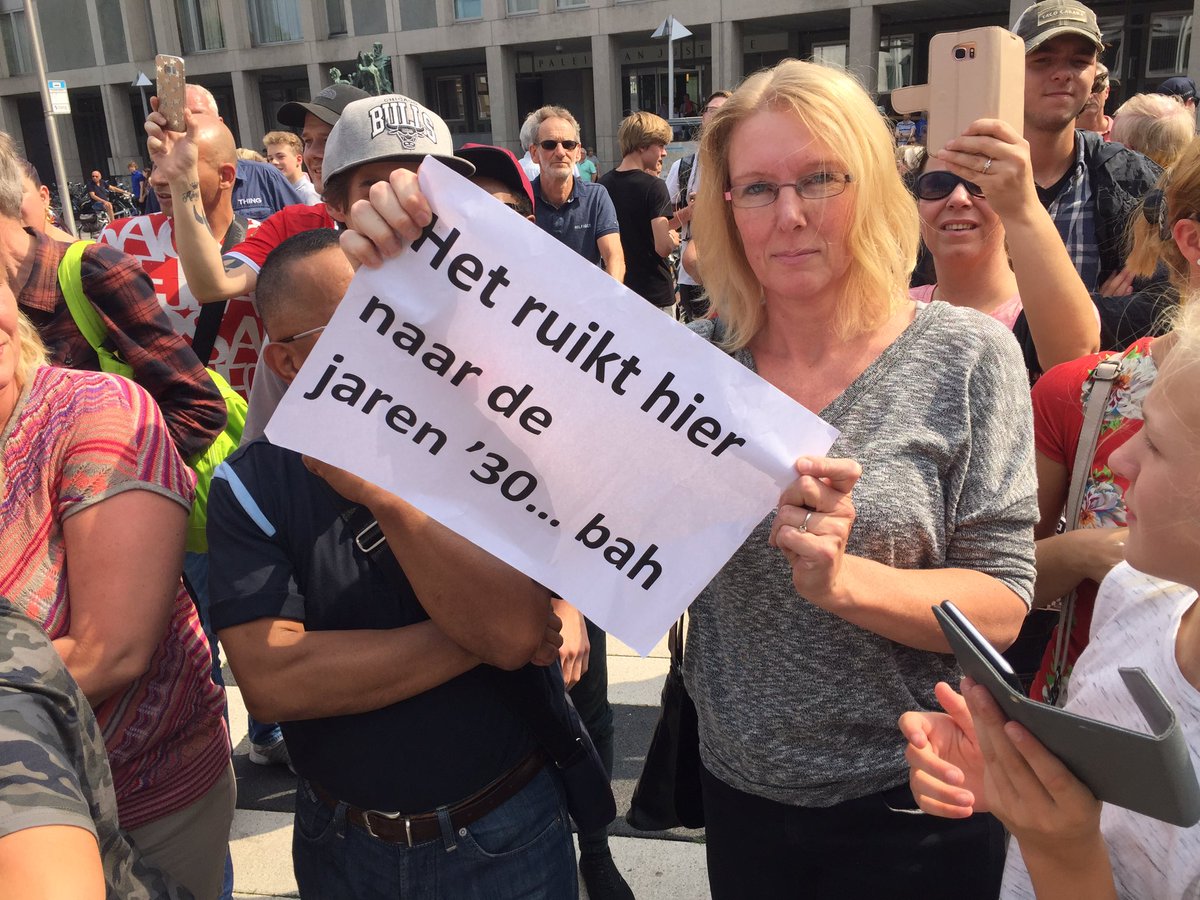 A ‘new’ Mondrian has surfaced at Christie’s auction house in Amsterdam. The work comes from private ownership and was hitherto unknown. The painting shows a landscape with in the distance Arnhem city, writes Omroep Gelderland.

Piet Mondrian painted the work in 1902 or 1903. The painting Landscape near Arnhem is not described in any catalog and has never previously hung in a museum.

According to art specialist Odette van Ginkel the owner does not know much about the origin and how it came into the family. Van Ginkel believes the painting was sold fairly quickly probably after it was finished. Possibly therefore it has never appeared in a catalog.

There is little or no doubt about the authenticity of the painting. Dutch Institute for Art History RKD and the The Hague Municipal Museum reviewed the work.

A similar work by Piet Mondrian is known, painted from the same spot on the north side of the capital of Gelderland.

The painting is now officially approved and will be listed in the next catalog of Mondrian‘s work. Which will come out next spring.

The painting is estimated to be sold at between 120,000 and 180,000 euros. The work will be auctioned Tuesday at Christie’s in Amsterdam.

This summer 2015 video shows brimstone butterflies on flowers. In the background, one can hear howler monkeys; as it is in Burgers Zoo in Arnhem, the Netherlands.

This video shows a solidarity demonstration in Arnhem, the Netherlands on 15 October 2015 with the victims of the terrorist massacre in Ankara, Turkey, which killed far over 100 people.

As the sun sinks over the African savannah, a whole new set of animals sniff the breeze, emerging from their hiding places, ready to begin their day. The Aardvark is one such creature. Shy, secretive, and just plain bizarre, these seldom seen myrmecophages begin their nightly venture into the black night. Join us as we follow one of these mysterious earth movers on its nightly sojourn into the African wild.

A week ago, a baby aardvark was born in Burgers’ Zoo in Arnhem, the Netherlands. This happens only rarely. Media were told about it only today, because aardvarks often die during or just after birth.

This 2016 Dutch video is about City Park Sonsbeek (Sonsbeekpark), Arnhem, The Netherlands.

On 26 March this year, Koos Dansen lectured in Apeldoorn, the Netherlands, about birds in Arnhem, his city.

Translated from the report about that lecture by Yvonne Zwikker, some facts about birds:

– nuthatches, if given the chance, use bark of Scots pine trees as nesting material

– in the Netherlands about 400 mandarin duck couples have been counted. The world population is 10,000 pairs

– crested tits in the Netherlands do not use nest boxes, but in Poland they do

– in the Schuytgraaf district, fifty meters from the railway station, on fallow land, the bluethroat has been observed

– in areas where the construction of a new neighborhood has been interrupted, opportunities come for birds, though this is often temporary

– during the Whitsun weekend, 25 sand martins started nesting in a sand wall in the district Schuytgraaf which is under construction. At the request of Koos Dansen the work was suspended for three months

– spoonbills are feasting on American crayfish

– avocet couples after mating kiss each other with their bills

In the night of 4-5 May 2013, two Sumatran tigers were born in Burgers’ Zoo in Arnhem, the Netherlands.

This video shows their birth.

This video is about adult tigers at that zoo.

July 2013. Sumatran tigers, found exclusively on the Indonesian island of Sumatra, are on the brink of extinction. By optimistic estimates, perhaps 400 individuals survive. But the exact the number and locations of the island’s dwindling tiger population has been up for debate: here.