Brown Thrashers are secretive, and hard to spot in their favorite spots under dense vegetation, but they can make a lot of noise as they rummage through the leaf litter. Here, the Savannah Osprey cam zooms in on a perching thrasher before it has a chance to depart from a branch.

The full 55-minute interview with this veteran, Joe Glenton, is here.

AFGHAN REFUGEES LIVE IN LIMBO ON U.S. MILITARY BASES Nearly 50,000 Afghan refugees are living on military bases in the U.S., and many say they don’t have supplies for the winter and don’t know how much longer they will have to wait for permanent homes. The conditions are an example of what critics say is the Biden administration’s lack of preparedness when it comes to Afghan refugees. [HuffPost] 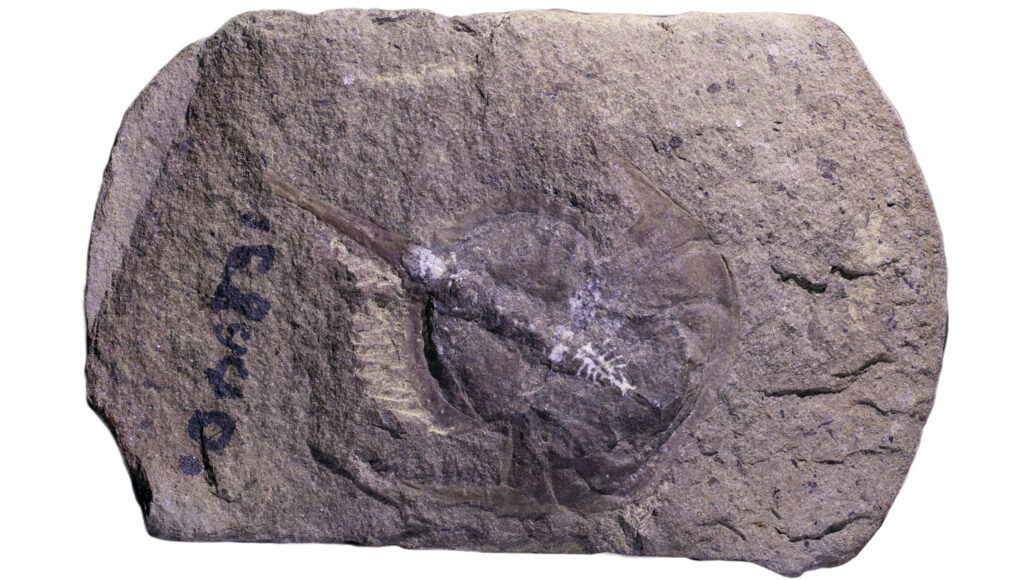 A newly analyzed specimen is a ‘one-in-a-million’ find, researchers say

Paleontologists can spend years carefully splitting rocks in search of the perfect fossil. But with a 310-million-year-old horseshoe crab brain, nature did the work, breaking the fossil in just the right way to reveal the ancient arthropod’s central nervous system.

Of all soft tissues, brains are notoriously difficult to preserve in any form (SN: 10/31/16). Stumbling across such a detailed specimen purely by chance was “a one-in-a-million find, if not rarer,” says evolutionary paleontologist Russell Bicknell of the University of New England in Armidale, Australia.

The fossilized brain is remarkably similar to the brains of modern horseshoe crabs, giving clues to the arthropods’ evolution, Bicknell and colleagues report July 26 in Geology. And the brain’s peculiar mode of preservation could point paleontologists toward new places to look for hard-to-find fossils of soft tissues.

This 2021 video from England says about itself:

It represents the first record for Staffordshire and the West Midlands Region.

The Blyth’s Reed Warbler appears to be expanding its range westwards across Europe with an increasing number of singing males reaching Britain.

The majority of the world population spend the winter in the Indian Subcontinent.

This year, for the first time ever, a Blyth’s reed warbler couple nested in the Netherlands. The young birds fledged from the Texel island nest,

This 8 August 1980 video from the USA says about itself:

The history of racism against Asians and Asian Americans in the US goes back more than 150 years. This panel looks at part of this history including the internment of Japanese Americans and Japanese Peruvians in the US during the 2nd World War. It also looks at the denialism around the ‘Comfort Women’ and the history of China-bashing by the US.

As the pandemic drags on, Asian Americans are still being attacked.

Bird of Prey, the multi-award-winning feature-length documentary from the Cornell Lab of Ornithology, weaves a remarkable story of the world’s rarest eagle species and the heroic individuals working tirelessly to save it. Since its release in 2018, Bird of Prey, has screened to countless audiences around the world and throughout the Philippines where the film has become an invaluable tool for raising awareness and support for conservation of the critically endangered Philippine Eagle.

To learn more about Philippine Eagles and how you can help support their conservation visit here.

The Island of the Last Surviving Mammoths

The Wrangel Island mammoths would end up being the final survivors of a once-widespread genus. In their final years, after having thrived in many parts of the world for millions of years, the very last mammoths that ever lived experienced what’s known as a mutational meltdown.

The last few months have seen a number of devastating weather events made worse by climate change.

Countries around the world are seeing unprecedented changes…

Scientists say average temperatures are on the rise…

And Europe has seen its worst floods in a generation…

And is climate change now a bigger worry than it’s ever been?

Crystal Raymond – Climate Adaptation Specialist at the University of Washington.

This 21 July 2021 music video from Epitaph Records in the USA is the new song by the Linda Lindas, called Oh!

This video from the USA is called Wood Stork Overlooks Saltmarshes Of Skidaway Island, Georgia – July 23, 2021.