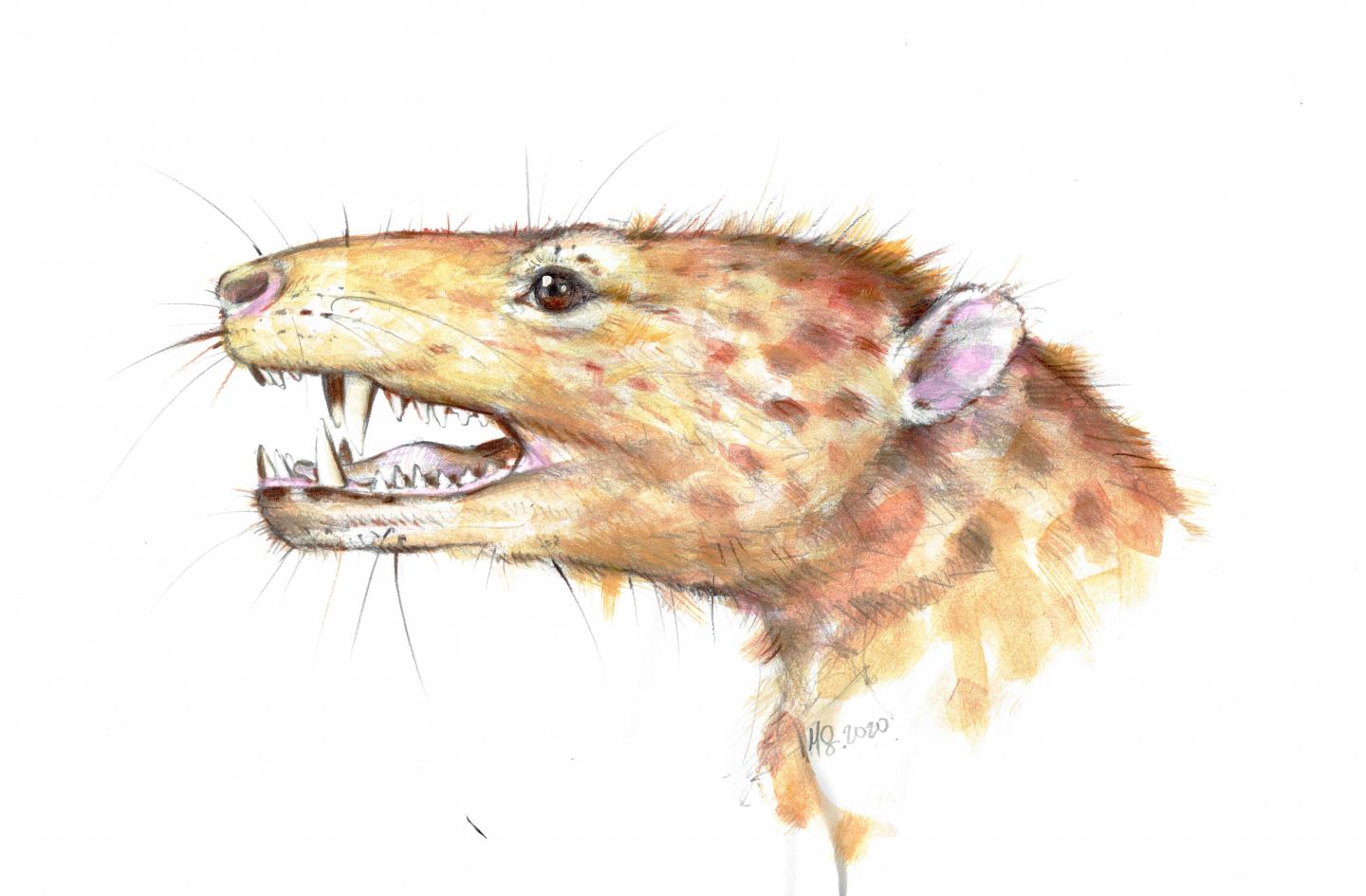 From Uppsala University in Sweden:

The first mammals originated in the latest Triassic period, around 205 million years ago. An ancestor to mammals were the therapsids, “mammal-like reptiles” referred to as stem mammals or proto-mammals, which originated about 320-300 million years ago. One unique characteristic of the lineage that included mammals and animals related to mammals (synapsids) was that they developed complex occlusion. Close ancestors to mammals, called mammaliaforms, developed rows of cusps on molar-like teeth adapted for more omnivorous feeding. The origin of this multicusped pattern and double-rooted tooth has thus far remained unclear.

A team of scientists led by Grzegorz Niedzwiedzki from Uppsala University have investigated the jaw anatomy and tooth structure of a recently described new mammaliaform species named Kalaallitkigun jenkinsi. It was discovered on the eastern coast of Greenland and was a very small, shrew-like animal, probably covered with fur. It would have been the size of a large mouse and lived during the Late Triassic, around 215 million years ago.

“I knew it was important from the moment I took this 20 mm specimen off the ground,” says Niedzwiedzki, researcher at Uppsala University and the corresponding author of the publication.

The researchers believe that the structural changes in the teeth are related to changed feeding habits. In this case study, the animals were switching to a more omnivorous/herbivorous diet and the tooth crown was expanding laterally. Broader teeth with “basins” on the top surface are better for grinding food. This development also forced changes in the structure of the base of the tooth.

The biomechanical analysis that was carried out within the study found that multi-rooted teeth are better able to withstand mechanical stresses, including those of upper and lower tooth contact during biting, compared to single-rooted teeth. Human teeth, for instance, have this characteristic. The results suggest that the development of molar-like teeth with complex crowns may have developed together with biomechanically optimised dual roots.

“The early evolution of mammals is a particularly interesting topic in evolutionary studies. This tiny jaw from Greenland shows us how complex mammalian teeth arose and why they appeared,” says Niedzwiedzki.

“Our discovery of the oldest mammalian ancestor with double-rooted molars shows how important the role of teeth was in the origin of mammals. I had this idea to look at the biomechanics and the collaboration with the engineers turned out great,” says Tomasz Sulej, researcher at the Polish Academy of Sciences, first author of the publication.

“It seems that the fossils of close mammalian ancestors must be looked for in even older rocks,” says Sulej.