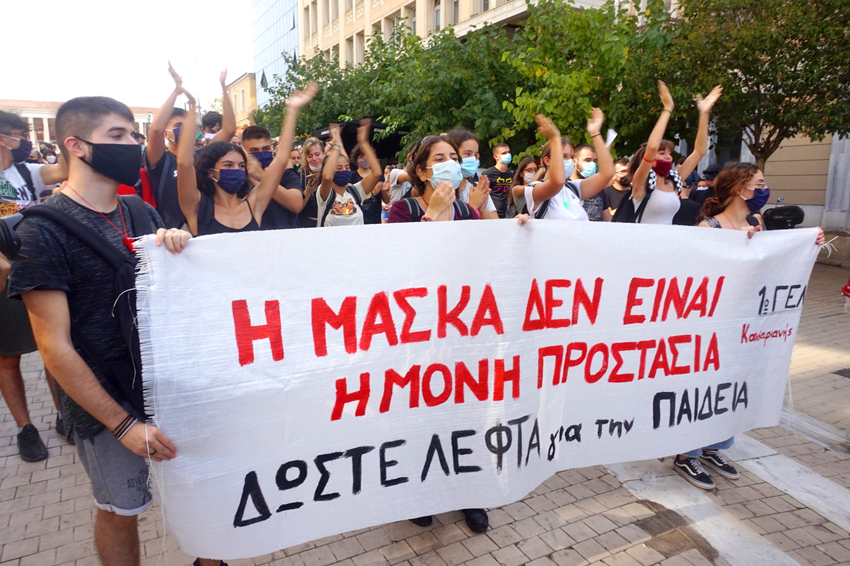 Last Thursday in Athens, over 2,000 school students, along with delegations from university students’ unions, marched to the Vouli (Greek parliament) shouting ‘money for health and education, that’s what could protect us from the pandemic’ and ‘masks are not enough’. Marchers demanded the resignation of the Education Ministry.

The march took place as Covid-19 cases and deaths have more than trebled this month as compared to spring, with Athens hardest hit.

The government have imposed draconian rules, prohibiting meetings of more than nine persons, either indoors or outdoors. Over summer, the government voted in a reactionary Bill restricting marches and demonstrations.

But Greek riot police stayed away from the school students’ march.

Greek hospital doctors were also on the march last Thursday in a mass protest meeting at the Health Ministry building as part of their 24-hour national strike demanding the employment of doctors and staff at state hospitals and mass free Covid-19 tests for all.

But a OENGE (hospital doctors federation) spokesperson announced that Health Ministry officials had told their delegation that no government cash is available for hospitals.

At the port of Piraeus, seafarers on ferries staged a solid 100% 24-hour strike against the Greek government attack on wages and rights. Last June, the government annulled all collective agreements for freight ships and oil tankers.

Seafarers’ unions called the strike against this government action and in defence of their rights.

But the PNO (federation of seafarers trades unions) leaders have refused to call a national strike.

At a mass meeting in the Piraeus docks, the President of the PENEN (deck crews) trade union Antonis Dalakogeorgos called for the unification of all the different protests and for the creation of a ‘common centre of struggle’ to fight the government.

The GSEE (Greek TUC) leaders have obeyed the EU and bosses’ diktats and have refused to even call a protest march.

Delakogeorgos stopped short of calling for a new leadership in the trade union and labour movement to organise the overthrow of the current right-wing government.