Ainsley SHOCKED After Learning Kids Can Get Covid

[Rupert Murdoch‘s Fox News employee] Ainsley Earhardt, a master of pushing misinformation, bought into a lot of misinformation herself when she finally learned the truth about kids and Covid. Sam Seder and the Majority Report crew discuss this.

NEW VIRUS HOT SPOTS EMERGE IN U.S. At least 20 million people around the globe have tested positive for the coronavirus, according to data from Johns Hopkins University. It’s just over a month after the world passed 10 million cases. Over 733,000 people have died from COVID-19 globally. The U.S. leads with over 5 million confirmed cases and more than 163,000 deaths, making up about a quarter of all COVID-19 cases and deaths in the world. The U.S. saw nearly 48,000 new cases on Aug. 3, with many of them concentrated in the South. An infectious disease expert predicted when U.S. cases will again explode — and Dr. Fauci has warned of a “difficult” winter. [HuffPost]

Why is the US doing less and less COVID-19 testing? 11 August 2020. Without any serious explanation by the government, the number of tests being done every day in the United States has dropped significantly over the past two weeks: here.

“They spout in the news ‘thank you to health care heroes’ but what thanks do we get?” US nurses’ poll shows appalling working conditions in the pandemic. By Julian James, 11 August 2020. The NNU study shows that only 24 percent of nurses think their employer is providing a safe workplace.

“They have a multi-billion dollar corporation, and they work us to death”. Indiana Faurecia workers denounce unsafe conditions, forced overtime. By Tim Rivers, 11 August 2020. Auto parts workers at the Faurecia plant in Columbus, Indiana, have described forced overtime at their factory, the spread of COVID-19 and other grueling and dangerous conditions.

Producers push reckless resumption of North American film production in face of pandemic. By Lee Parsons, 11 August 2020. In an indication of the studios’ disregard for the health and safety of workers, now showing up in film production contracts are waivers designed to give the employers legal immunity from suits over failure to provide protection against the virus 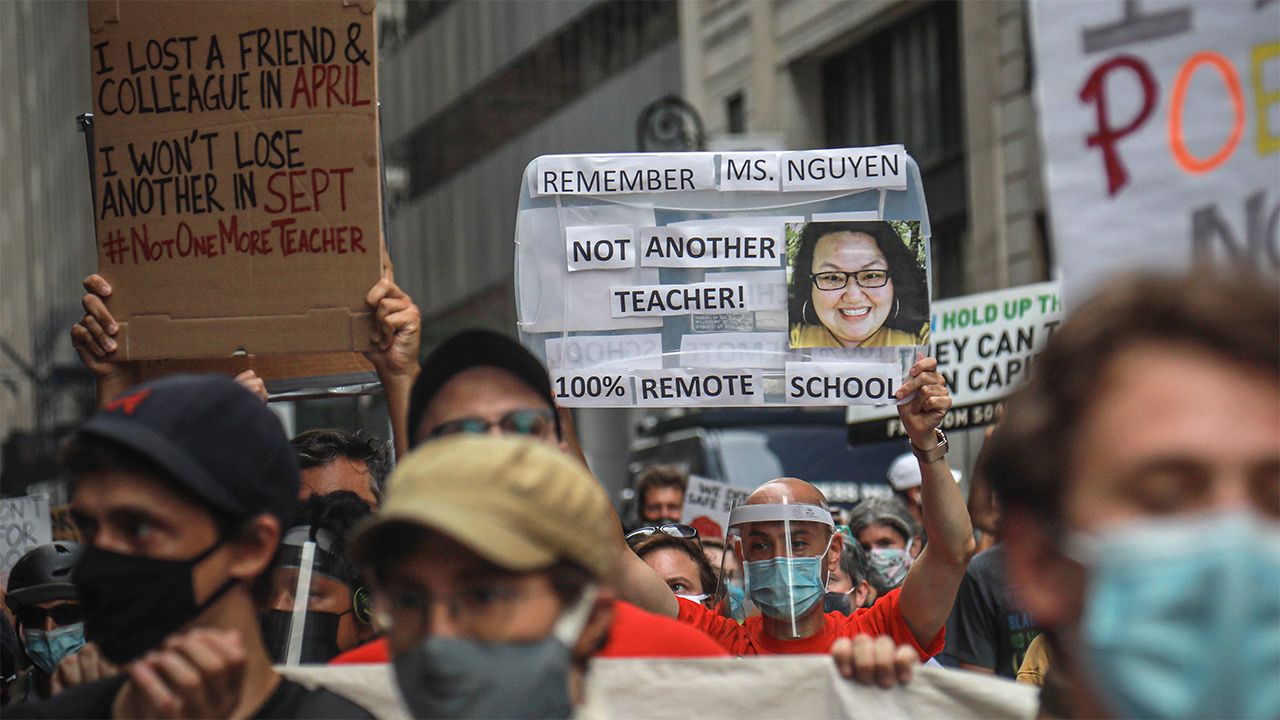 TRUMP CLAIMS ‘1917’ FLU PANDEMIC ‘PROBABLY ENDED’ WW2 Trump got history wrong on multiple counts when he claimed that the “1917” Spanish flu pandemic likely led to the end of World War II ― which began more than two decades later (the Spanish flu pandemic started in 1918). “The closest thing is in 1917, they say, the great pandemic. It certainly was a terrible thing where they lost anywhere from 50 to 100 million people,” Trump said during his White House news briefing. “Probably ended the Second World War.” Trump had just been praising his administration’s response to the coronavirus that has killed over 160,000 people in the U.S. [HuffPost]

Haitian professors protest back-to-school order, declining salaries. On August 7, teachers in Haiti denounced the government’s order to resume classes on August 10. The National Confederation of Haitian Educators (CNEH) called for protests and boycotts. CNEH also criticized the 50 percent fall in real pay due to rampaging inflation and the depreciation of the Haitian gourde against the US dollar.

Peru reopens economy as thousands of miners contract COVID-19. By Mauricio Saavedra, 11 August 2020. With 478,024 coronavirus cases, Peru has the third most infections in Latin America, and with over 21,000 fatalities, it has the highest per capita death toll in the region.

1 thought on “COVID-19 news from the Americas”