Figures obtained by Liberty Investigates, part of the human rights group Liberty, determined the ethnic breakdown of fines issued by 25 out of 43 police forces in England and Wales.

It found that 18 were more likely to issue fines to BAME people, with Cumbria police demonstrating the most disproportionate use of fines at 6.8 times. 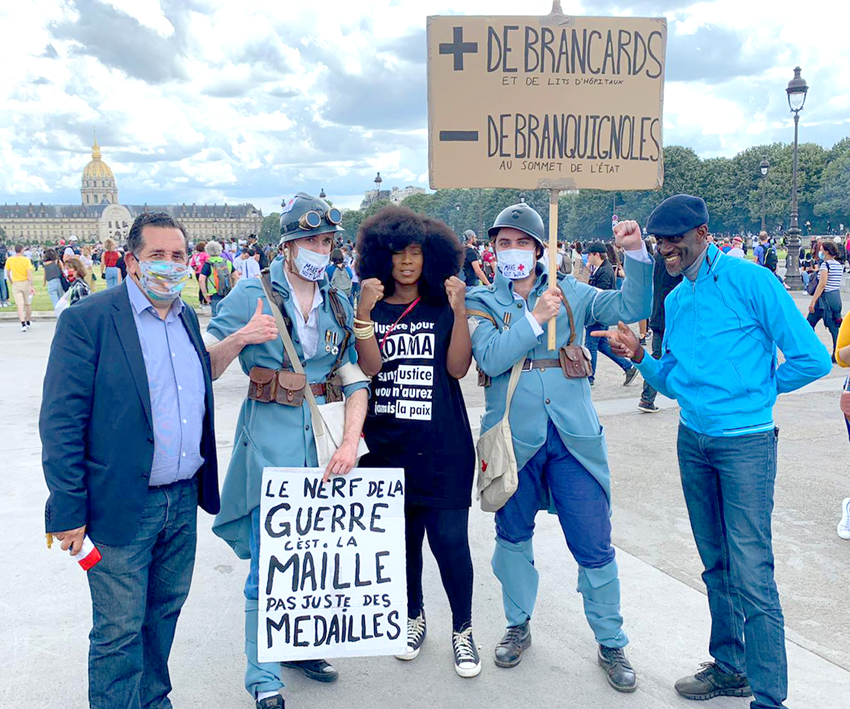 This photo shows Assa Traore (centre), sister of Adama Traore, killed by French police in Paris in 2016, taking part in the Paris health workers’ demonstration, along with firefighters.

NATIONWIDE demonstrations in France on Tuesday demanding better pay and resources for health workers were the subject of repeated police attacks.

Officials said … more than 30 arrests were made.

Across France, hospital staff have been demanding government action on pay, recruitment and more beds in hospitals.

Unions say the Covid-19 pandemic has exposed weaknesses in the French health system and want a major boost in investment.

In France, the number of people confirmed to have died from coronavirus infection reached 29,439 on Tuesday, according to data compiled by Johns Hopkins University.

Meanwhile, the French government has retreated before its own army of riot police.

The French government has dropped plans to ban the use of the controversial and deadly chokehold method during police arrests following agitation from the police unions, who threatened strike action if they were not allowed to choke their victims.

The government’s ban on the chokehold has now been binned after the police organised five days of their own demonstrations.

The death of Adama Traoré in Paris in 2016 has been likened to the killing of George Floyd. Protesters in France held signs displaying his name and have accused police of using brutality towards minorities.

Mass demonstrations led Interior Minister Christophe Castaner to announce that there would be ‘zero tolerance’ of racism in law enforcement, and a ban on the chokehold method – where pressure is applied to the neck of a suspect.

But police unions and officers, in a series of counter-demonstrations, rallied on the Champs-Élysées, throwing their handcuffs on the ground.

On Monday, national police director Frédéric Veaux sent a letter to staff clarifying the announcements made by the interior minister. In it, he said the measure would no longer be taught in training schools but could be used ‘with discernment’.

1 thought on “Police, racism and anti-racism”