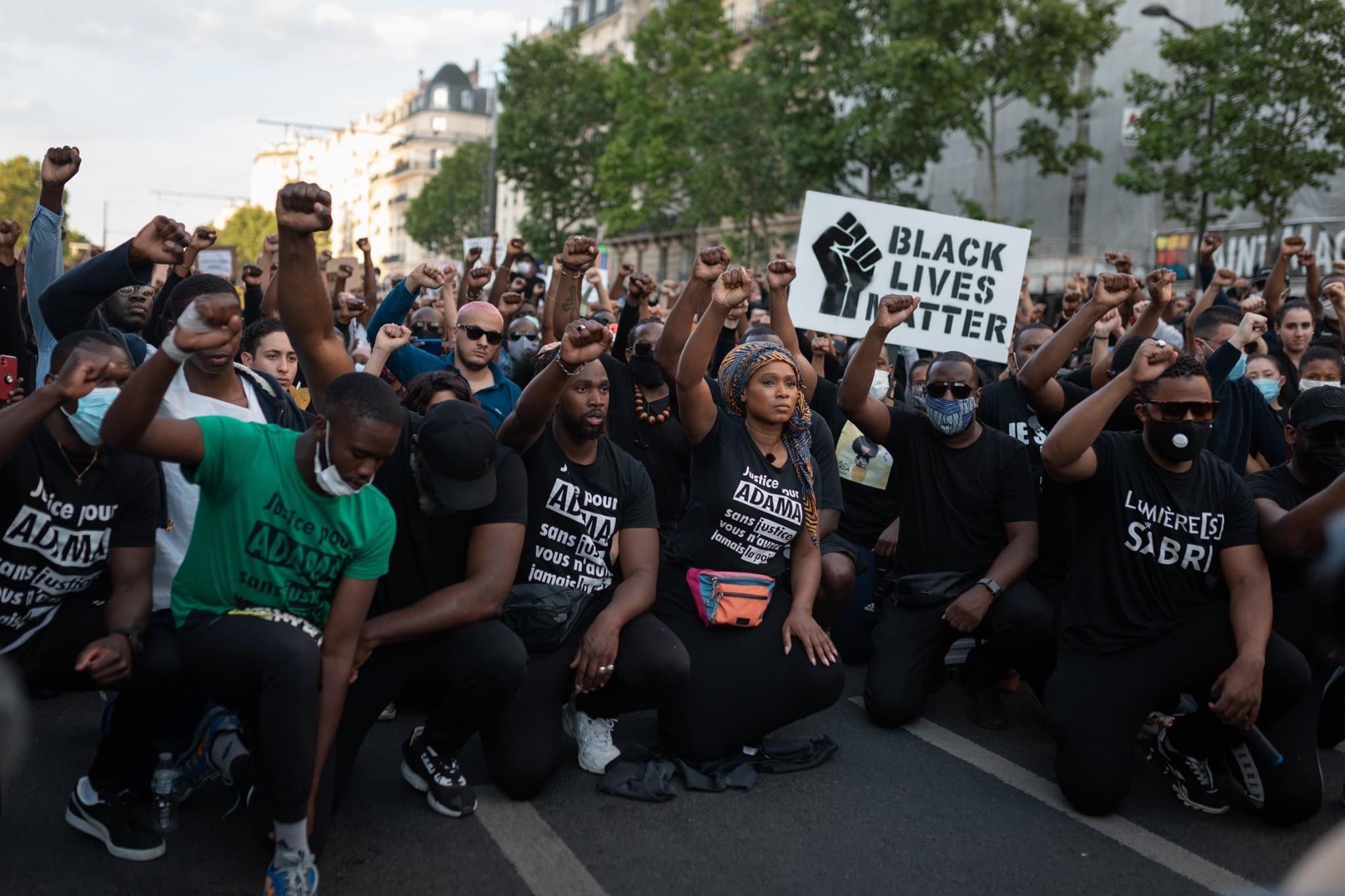 This photo shows Assa Traore, the sister of Adama Traore addressing a 20,000-strong demonstration in Paris, France demanding justice for her brother, murdered by police and in support of the Black Lives Matter protests in the US last week.

‘We are fighting for our brother in the US George Floyd and for Adama’ as 20,000 march in Paris defying ban

IN THE WAKE of last week’s mass Black Lives Matter protests against police racism and brutality in France, the Macron government has announced a ban on the chokehold method of arrests.

On the eve of his election to the French presidency, Emmanuel Macron promised to lead an ‘uncompromising’ fight against police violence and impunity.

‘I want to change the culture, the management and the recruitment of French police,’ the future president told news website Mediapart on May 5th, 2017, ahead of his victorious run-off against the far right’s Marine Le Pen.

‘When there is manifestly a problem, the police hierarchy must be challenged,’ he added.

Three years on, the only visible change is the widened gulf between French police and large swathes of the public, spurred on by riot police violence against the Yellow Vests movement.

On Monday, Jacques Toubon, France’s human rights ombudsman, raised the alarm over a ‘crisis of public confidence in the security forces.’ In a wide-ranging damning report, Toubon urged a reversal of what he described as a ‘warring mentality’ in law enforcement.

Defying police orders, tens of thousands of protesters gathered in Paris and other French cities last week to protest against police racism and impunity. Demonstrators voiced their support for the Black Lives Matter protests and demanded justice for Adama Traoré, a 24-year-old French Malian black man who, like George Floyd in the US, died while in police custody in the Paris suburbs in 2016.

Over the weekend, tens of thousands of people across France continued to pay homage to both Traoré and Floyd, denouncing systemic racism and police brutality in a dozen cities including Lyon, Lille, Nice, Bordeaux and Metz.

In response, the Elysée presidential palace on Monday said in a statement that Macron had spoken to cabinet ministers over the weekend, urging them to come up with proposals to rapidly improve policing practices.

Hours later, Interior Minister Christophe Castaner unveiled a first batch of measures, including a ban on the controversial chokehold method of arrest that has been blamed for past fatalities.

‘It will no longer be taught in police and gendarmerie schools. It is a method that has its dangers,’ he told a press conference.

Castaner said too many officers ‘have failed their republican duty’ in recent weeks, as several instances of racist and discriminatory remarks were revealed.

The minister said he would request the suspension of officers involved in suspected racism, referring to an investigation into racist messages allegedly exchanged by police officers in a private Facebook group of nearly 8,000 members and that the use of body cameras would be beefed up.

Castaner told reporters: ‘Racism has no place in our society and even less in our Republican police. I will not let the hateful actions of some officers stigmatise the police as a whole.’

However, he added: ‘I refuse to say that the police institution is racist, but yes some police officers are racist.’

‘Tonight, this fight is no longer just the fight of the Traoré family, it’s everyone’s struggle,’ she said. ‘We are fighting for our brother in the US, George Floyd, and for Adama.
’
The French capital alone saw crowds of more than 20,000 people defying a ban on large gatherings …

That same day Castaner had defended the police, criticising peaceful protests that turned violent. In a tweet, he said that violence has no place in a democracy. And he congratulated the police for ‘their control and composure’.

For the first time since Traoré’s death in 2016, Macron asked Minister of Justice Nicole Belloubet to look into the case.

While France famously doesn’t compile official statistics based on faith, ethnicity or skin colour, racial discrimination by law enforcement has been widely documented.

A study conducted by France’s National Centre for Scientific Research has shown that blacks are 11.5 times more likely to be checked by police than whites, and those of Arab origin are seven times more likely.

In a landmark 2016 case, France’s highest court ruled for the first time that police had illegally stopped three men based on racial profiling, setting more specific rules to ensure ID checks are not discriminatory.

France’s social and racial inequalities were once again exposed during the nationwide lockdown imposed in mid-March to stem the spread of Covid-19.

On the first day of confinement, the Seine-Saint-Denis department northeast of Paris – home to France’s poorest and most immigrant-rich districts – accounted for 10 per cent of all fines handed out for breaching the lockdown, despite comprising just over two per cent of the country’s population.

His office said in a press statement: ‘Following the IPCAN (Independent Police Complaints Authorities’ Network) seminar organised by the Defender of Rights and the FRA (European Union Agency for Fundamental Rights) last autumn, the Defender of Rights publishes today the account-report of two days of exchanges on police-population relations.

‘Reporting on the latest research, studies and numerous examples of national practices, the document synthesises the words of more than a hundred practitioners from France and Europe.

‘This publication is accompanied by a joint declaration by several members of the IPCAN network, who call for the implementation of some twenty recommendations in order to improve relations between the police and the population.

‘Organised on October 17 and 18, 2019, the 5th IPCAN seminar entitled “Police-population relations: issues and practices” was held in the offices of the Defender of Rights in Paris in the presence of representatives of the police force, public authorities, external control bodies of the police, lawyers, victim assistance services, and researchers as well as representatives of international organisations and institutions of the European Union.

Plenary sessions and round tables focused on three themes: