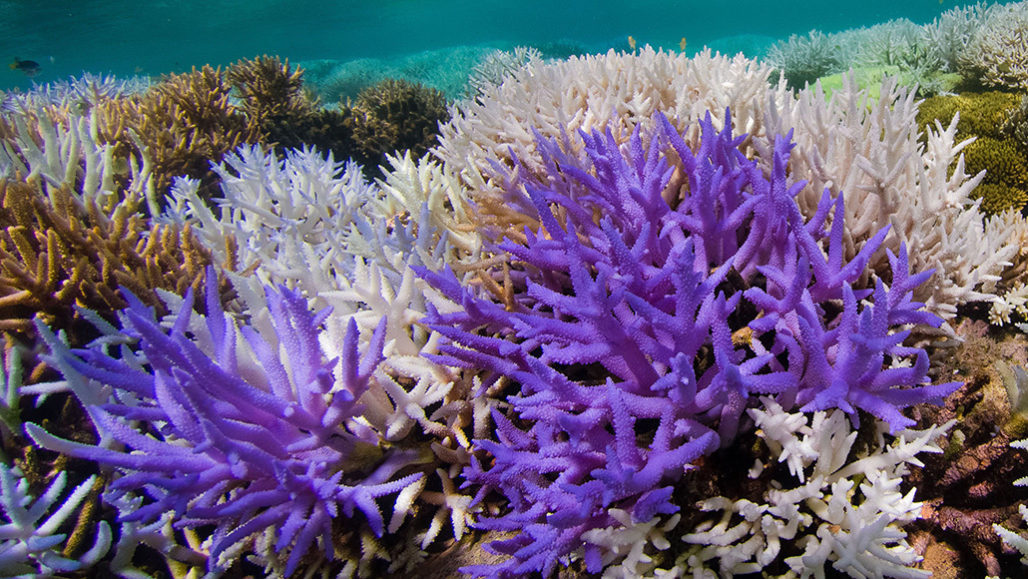 After a warm spell, some corals, like these Acropora corals in New Caledonia in the Pacific Ocean, turn bright hues instead of bleaching white. The corals boost their production of pigments after losing the beneficial algae that live in their cells, a study finds. Photo: Richard Vevers/The Ocean Agency, XL Catlin Seaview Survey.

Neon colors may help some corals stage a comeback from bleaching

For some corals, going bright may be part of their fight against bleaching.

Higher-than-normal ocean temperatures can cause some corals to bleach and lose the beneficial algae that dwell within their cells. Those algae help feed the corals and give them their color, so bleached corals can become bone white, and may struggle to survive (SN: 4/7/20). But when some corals bleach, they turn neon hues from red to blue to purple.

A new study finds that those flashy colors may be part of a response that can help the corals recover from bleaching and reunite with their algal partners.

“It’s visually very striking, but … there was surprisingly little information” on how and why colorful bleaching happens, says Elena Bollati, a marine biologist at the National University of Singapore.

Some researchers suspected that with the algae gone, the bleached corals’ vivid natural colors shone through. But the new work suggests a different dynamic. In the lab, certain wavelengths of light appear to trigger an uptick in a coral’s production of pigments, which act as a sunscreen to create a more hospitable home for the returning algae, Bollati and colleagues report May 21 in Current Biology.

The research “shows that some of these corals are trying to protect themselves with really spectacular side effects,” says Daniel Wangpraseurt, a coral reef scientist at the University of Cambridge who was not involved with the study.

A survey of bleaching events in the world’s oceans from 2010 to 2019 revealed that some corals’ neon colors corresponded with mild heat stress, caused by a long spell of warmer waters or a brief temperature spike. In most cases, the colors appeared two to three weeks after the heat stress events, says Bollati, who did the work while at the University of Southampton in England.

In the lab, the scientists simulated mild bleaching by exposing coral colonies to a slow ramp up in temperature. As the team turned up the heat, the amount of algae, detected by the red light they emit under a certain wavelength of light, in cells plummeted. A few weeks after the heat stress, the corals bumped up their levels of a fluorescent compound, the pigment that gives them color. The scientists also found that an imbalance of nutrient levels could cause colorful bleaching.

After losing their algae, an increased exposure to blue light in sunlight may play a role in this rise in pigment production, the team found. Healthy, unbleached corals rely on algae’s pigments to absorb some sunlight. Without the algae, more light — including its blue wavelengths — can enter and bounce around inside the corals’ skeleton structure. That added reflection boosts the exposure of the corals’ living tissue to light.

A bombardment of blue light prompted bleached corals to start pumping out more of their own protective pigments, the researchers found. The scientists also observed that that vividly colored areas of the corals more quickly regained their symbiotic algae than areas with less pigment.

Corals “have this capacity to fight back,” says University of Southampton marine biologist Jörg Wiedenmann, who was part of the research team. “They are by no means doomed” after one bleaching event. But, he cautions, their long-term survival depends on people acting to limit climate change so that corals don’t experience more stress than they can handle.

3 thoughts on “Corals use colours to fight bleaching”