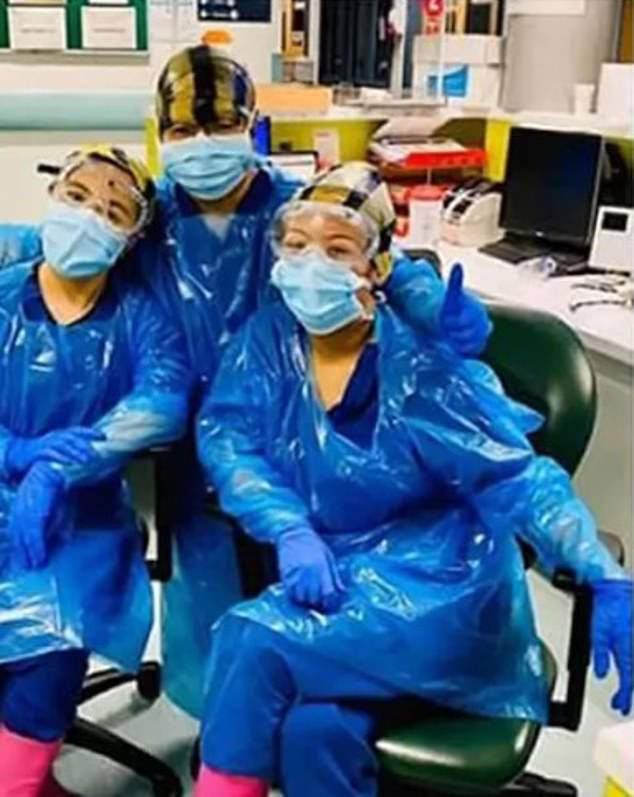 This photo shows British nurses having to use binbags as makeshift Personal Protective Equipment during the COVID-19 pandemic.

The survey finds that for nursing staff working in high-risk environments (this includes those working in intensive and critical care units), less than half (43%) of respondents from a BAME background said they had enough eye and face protection equipment.

This is in stark contrast to two-thirds (66%) of white British nursing staff.

The disparity was equally stark when it came to fluid-repellent gowns, with 37% of BAME respondents saying they did not have enough to use during their shift with only 19% white British staff reporting the same concerns.

More than half of BAME respondents (53%) also said they had been asked to re-use single-use PPE compared with 42% of white British respondents.

The survey also found similar differences for those working in non-high-risk environments such as those other than intensive or critical care units:

Dame Donna Kinnair, Chief Executive and General Secretary of the Royal College of Nursing, said: ‘All of our nursing staff must have the protection they need, and action must be taken urgently to ensure they are all kept safe.’

Teachers’ union NASUWT has raised urgent concerns with the Prime Minister over the re-opening of schools and the disproportionate impact of Covid-19 infections and deaths on black and minority ethnic children, young people and adults.

NASUWT general secretary Dr Patrick Roach said: ‘The government must make public the evidence and assessment on which it is relying to conclude that the wider reopening of schools will not lead to further discriminatory impacts in the transmission of the coronavirus.

‘Schools cannot be expected reasonably or responsibly to plan for wider reopening without access to this critical information.’

BORIS JOHNSON WON’T SACK HIS TOP AIDE FOR BREAKING LOCKDOWN British Prime Minister Boris Johnson’s defense of the seemingly indefensible – his refusal to sack top aide Dominic Cummings after he traveled during lockdown – has left many people asking why a newly elected prime minister is burning through so much political capital to save one senior adviser. Johnson faces open revolt from members of Parliament, and insiders question whether Cummings, seen as one of those political figures who “gets” voters’ concerns, has in fact now “lost it” amid an extraordinary political backlash and tanking poll ratings. [HuffPost]