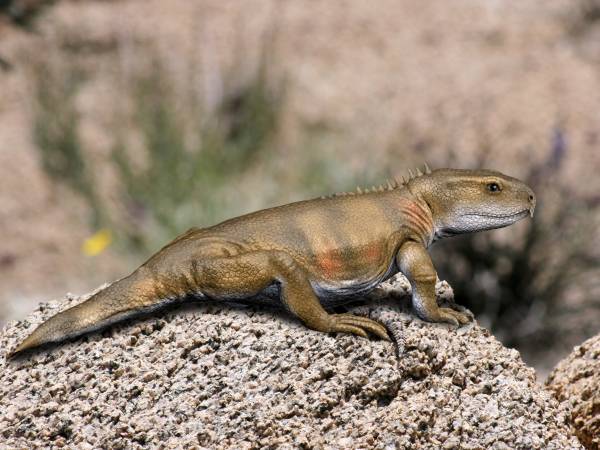 From the University of Alberta in Canada:

A new study by University of Alberta paleontologists shows that one type of ancient reptiles evolved a special type of tooth enamel, similar to that of mammals, with high resistance to wear and tear. The study is the first to report this kind of enamel in a fossil reptile.

The reptile — known as Priosphenodon — was a herbivore from the Late Cretaceous period that was about one metre in length. Part of a group of reptiles called sphenodontians, these reptiles are unique in that they lost their ability to replace individual teeth. Instead, sphenodontians added new teeth to the back ends of their jaws as they grew.

“Priosphenodon has the strangest teeth I have personally ever seen,” said Aaron LeBlanc, postdoctoral fellow in the Faculty of Science Department of Biological Sciences and lead author on the study. “Some aspects of their dental anatomy are reminiscent of what happened in the evolution of early mammal teeth.”

The specimens were found in Argentina’s Río Negro province as part of ongoing collaborative fieldwork and research between Michael Caldwell, professor in the Department of Biological Sciences and the Department of Earth and Atmospheric Sciences, and Argentinian paleontologist and fieldwork leader Sebastián Apesteguía. In order to look more closely at the teeth of Priosphenodon, the researchers cut open pieces of jaw and examined tissue-level detail preserved inside the teeth. They also used non-invasive CT scans to examine more complete jaw specimens.

“Priosphenodon enamel is not only thicker than that of most other reptiles, the enamel crystals are ‘woven’ into long threads that run through the whole width of the enamel. These threads are called enamel prisms, and they are almost exclusively found in mammals,” said LeBlanc, who is working under Caldwell’s supervision. “Our results suggest that strong selective pressures can force reptiles to come up with some very innovative solutions to the problems associated with tooth wear and abrasive diets — some of which mirror what happened in our earliest mammal ancestors.”

The scientists also note that there is one kind of lizard alive today that has prismatic enamel, like Priosphenodon — the spiny-tailed lizard of Australia. Like Priosphenodon, it mostly eats plants and has lost the ability to replace its worn teeth. However, the two reptiles are not closely related.

Collaborators on this study include Sebastián Apesteguía from Universidad Maimónides and the Fundación de Historia Natural Félix de Azara in Buenos Aires, Argentina and Hans Larsson from McGill University in Montreal, Canada. Funding for this research was provided by the Agencia Nacional de Promoción Científica y Tecnológica in Argentina, National Geographic, and Natural Sciences and Engineering Research Council of Canada (NSERC).