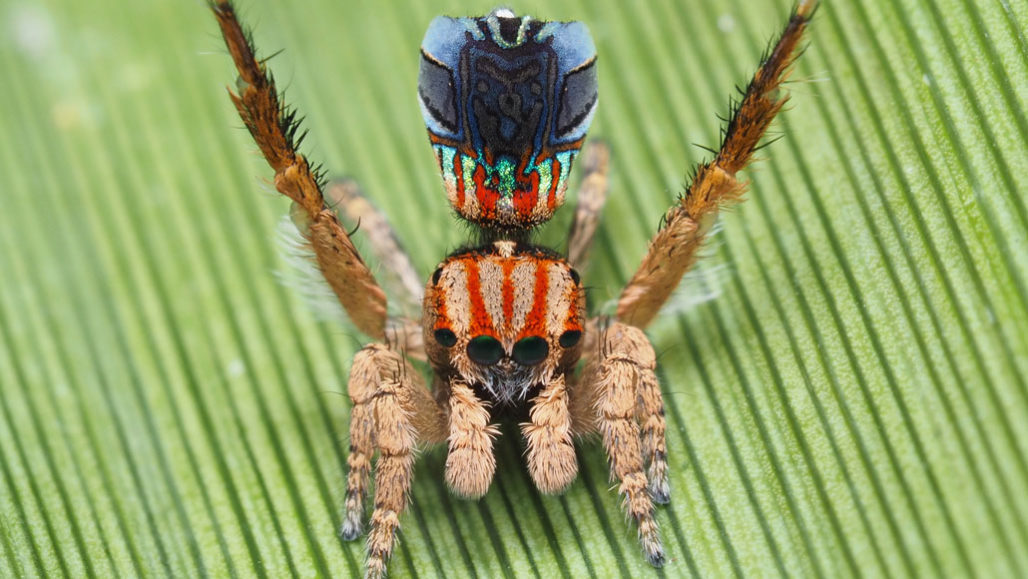 Dancing peacock spiders turned an arachnophobe into an arachnologist

Not yet a college graduate, Joseph Schubert has described 12 of 86 known peacock spider species

Joseph Schubert spends hours at a time lying in the dirt of the Australian outback watching for tiny flickers in the sparse, ground-hugging foliage. The 22-year-old arachnologist is searching for flea-sized peacock spiders, and he admits, he’s a little obsessed.

But it wasn’t always so. Schubert grew up fearing spiders, with parents who were “absolutely terrified” of the eight-legged crawlers. “I was taught that every single spider in the house was going to kill me, and we should squish it and get rid of it,” he says.

Then Schubert stumbled across some photographs of Australia’s endemic peacock spiders, a group named for the adult males’ vivid coloring and flamboyant dance moves aimed at wooing a mate (SN: 9/9/16; SN: 12/8/15). And he was hooked.

“They raise their third pair of legs and dance around and show off like they are the most amazing animals on the planet, which in my eyes they are.” He decided to pursue a career in arachnology. And despite not quite having completed his undergraduate degree in biology, he’s begun working part-time at Museums Victoria in Melbourne, and has already made a mark.

Of the 86 known peacock spider species — each just 2.5 to 6 millimeters in length — 12 have been described by Schubert, including seven named in the March 27 Zootaxa. Those seven were found at a range of sites across Australia, including the barren dunes and shrublands of Victoria state’s Little Desert and the red rocks and arid outback gorges of Kalbarri National Park, north of Perth.

“It’s a fantastic feeling to be able to document these species and empower them with names” that offer scientific recognition as well as a chance for legislated protections if needed, Schubert says. “I am very lucky to work in this field. I get to pull out my microscope and observe things that nobody has ever documented before.”

Sometimes, Schubert finds a peacock spider by looking for draglines of silk glimmering in the sunlight. As these tiny spiders from the genus Maratus leap from leaf to leaf in search of insect prey, they extend these safety lines behind them to catch them in case they fall.

If he’s really lucky, Schubert will catch a male spider mid-boogie, lifting its iridescent abdomen and vigorously waggling its legs in the air as it jerks back and forth in an arachnid tribute to the moonwalk. That usually happens during the Australian springtime in about September and October, as the males become sexually mature towards the end of their lives and take on brightly colored forms.

Those wild colors inspired some interesting names. Schubert’s dubbed one bright blue species with yellow spots Maratus constellatus, because it reminded him of Vincent Van Gogh’s painting The Starry Night. And last year, he called a striking black-and-white jumping spider that is a relative of peacock spiders Jotus karllagerfeldi for the late fashion icon Karl Lagerfeld.

Schubert admits he’s had a lot of help from many Australian photographers, amateur enthusiasts and citizen scientists who send pictures of these miniature spiders to Schubert or share them on social media. Without that vital help, “just a handful of us scientists would be looking … as opposed to thousands [of enthusiasts] uploading via Facebook,” Schubert says.

He still hasn’t entirely gotten over his arachnophobia, though he’s grateful that peacock spiders, while venomous to their tiny insect prey, are harmless to humans. He’s handled hundreds of the spiders and suspects their mouthparts are too small to puncture human skin, even if they wanted to take a bite.

Less charismatic spiders are sometimes still a challenge for Schubert’s nerves, though. In the Little Desert last year, while putting a 5-centimeter-long wolf spider into a container, the spider pushed the lid aside and crawled up Schubert’s arm. “I screamed,” he says, laughing. “But if I can prepare and mentally tell myself that a spider is not looking to hurt me, and even if it does bite me, it’s not going to do anything, then I can put myself in the mental position to handle it.”

The bushfires that swept vast areas of Australia between September and February (SN: 1/13/20) could potentially have burned through the tiny ranges of several peacock spider species found in Victoria’s alpine regions. Nobody has yet been able to check, and future field work is currently on hold amid the ongoing COVID-19 pandemic.

As soon as Schubert can get out again, he will — whether on a research trip or on his next holiday. The only problem, he says, is that “it’s sometimes difficult to find other people who want to spend personal time looking for spiders.”

Cribellate spiders spin thousands of tiny nanofibers into sticky threads. To keep from getting caught in their own webs, these spiders use a nonstick comb on their back legs. Now, researchers reporting in ACS Applied Nano Materials have patterned an antiadhesive nanostructure inspired by this comb onto a foil surface, creating a handy tool to control sticky lab-made nanomaterials for medical, smart textile and other applications: here.

2 thoughts on “Dancing peacock spiders made arachnophobe into arachnologist”