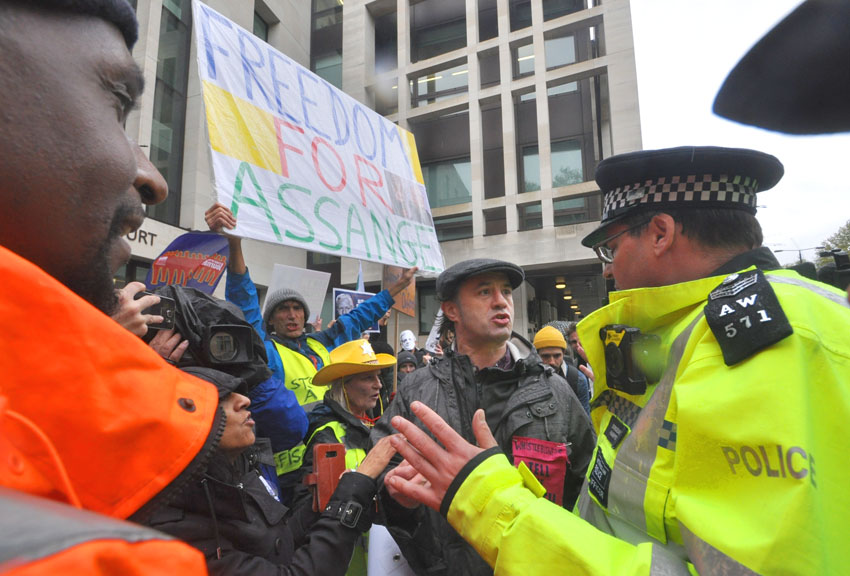 BELMARSH High Security prison is suffering from an outbreak of coronavirus to such an extent that it is ‘barely functioning’, WikiLeaks founder Julian Assange has revealed to a friend.

Assange has been languishing in the UK maximum security prison since April 2019.

British freelance video journalist Vaughan Smith revealed this shocking state of affairs, after talking with him by phone.

As many as 150 prison staff members have been forced into self-isolation as they might have contracted the coronavirus, Smith said. The prison admitted in mid-March that the disease had already reached its premises and even reported one coronavirus-linked inmate death.

Assange told Smith that the real death toll might well be higher, since ‘the virus is ripping through the prison.’

The WikiLeaks founder has to spend almost 24 hours alone in his cell as the prison apparently strives to limit any contact to stem the spread of the disease.

Yet Assange and other inmates spend the half an hour of exercise they are still allowed in a yard crowded with others, according to his friend.

Smith has reported on the WikiLeaks founder’s condition in Belmarsh before.

The journalist, who has known Assange for years, raised the alarm about his health back in 2019 following another phone call, which made Smith think he had been drugged in jail.

The Prison Governors’ Association recently said that 15,000 non-violent inmates should be released from British jails to stop the spread of Covid-19.

The Justice Department then suggested releasing just 4,000 of them. But only some 100 people have been set free, Smith notes, adding that Assange apparently did not make the list.

Assange’s treatment by the British authorities is nothing short of a ‘national disgrace’, the journalist said.

The UK has refused to set him free despite repeated pleas from various activists, doctors, Australian MPs and even the UN torture rapporteur.

The British government has also carried on with Assange’s extradition hearings, at a time when he is unable to consult with his lawyers to properly prepare his defence, Smith added.

Meanwhile, Julian Assange’s lawyer and mother of his two children, Stella Morris, warned that his ‘life is on the brink’ and she does not believe he would ‘survive infection with coronavirus’.

This 11 April 2020 WikiLeaks video says about itself:

Julian Assange’s fiancée (and children) talks to camera for the first time on the one year anniversary of his imprisonment.

In an interview over the weekend, Morris said that she had met Assange in 2011 when she joined his legal team.

She visited him in the embassy almost every day and ‘got to know Julian very well’. The couple fell in love in 2015 and got engaged two years later.

She said that Assange had watched both boys being born via video link and they had visited their father at the embassy.

Three-year-old Gabriel and one-year-old Max speak to their father via video calls, she says.

‘Forming a family was a deliberate decision to break down those walls around him and imagine a life beyond that of prison’, she said.

5 thoughts on “Will coronavirus kill imprisoned Assange for Trump?”